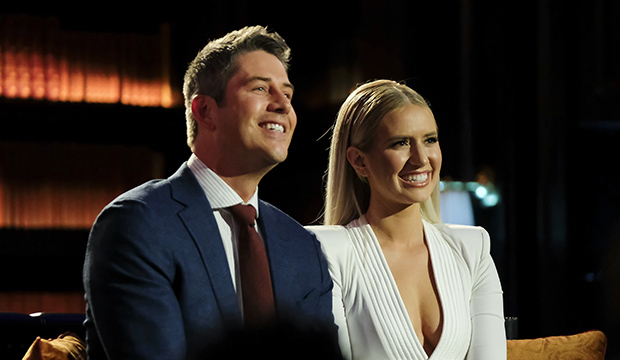 Peter Weber has taken a whole lotta heat for his rather, uh, questionable decisions on “The Bachelor,” culminating with him getting engaged to Hannah Ann Sluss, then breaking up with her to reunite with runner-up Madison Prewett, only to split two days after an super uncomfortable live “After the Final Rose.” But fellow Bachelor Arie Luyendyk Jr. won’t pass judgment on Weber’s roller-coaster season because he totally gets it.

“I’ve got to say as a Bachelor, I feel like you’re almost set up to fail. It’s, like, a recipe for disaster. So if there is a normal happy ending, like a Sean Lowe, Catherine [Giudici] ending, you’re almost surprised,” Luyendyk told “Us Weekly” (watch below), referring to the only Bachelor who married his final pick. “It’s hard to comment on [Weber] because people commented on our season, but if you’re not there and not in the situation, it’s really hard to place blame or to cast judgment, I would say.”

Luydenyk delivered one of the most dramatic and devastating finales on Season 22 when he changed his mind after choosing Becca Kufrin and broke up with her with cameras rolling. Unlike Weber, who’s now dating his fifth-place finisher Kelley Flanagan, the race car driver married his runner-up, Lauren Burnham, and the couple welcomed a daughter, Alessi, last year.

“There’s so much that you don’t see that goes into it. So even if [Weber] looks like the worst Bachelor, he probably wasn’t as bad as he seems,” Burnham added. “There’s probably things that happened that caused him to do those things.”

Luyendyk clarified that he didn’t feel like the show set out for him to personally fail, but that the format of the show does so organically for everyone. As he points out, the leads date multiple people at a time, which is “not normal,” and are then forced to dump people they’ve gotten close to in order to get engaged to one person.

“I just feel like it’s sort of cruel process to where you have to break up with someone and then get engaged to somebody else. It’s like if you could really separate your feelings throughout the whole show, which starts happening as the Bachelor — in the beginning it’s very odd — but as you go through the whole show, you start separating your feelings between one person and another person,” Luyendyk explained. “And then it gets down to the end. I feel like the structure itself lends to just a traumatic ending almost 95 percent of the time, for me at least. … So I feel like if they structured it just a little bit differently, it could lead to a better success rate.”

The couple, who served as judges on “The Bachelor Presents: Listen to Your Heart,” also noted that certain dates and situations are contrived for specific points during the season to amp up the drama for the sake of TV. “They’re not really thinking about the Bachelor’s heart or the contestants’ hearts,” Luyendyk continued. “A lot of the times, I feel like they can be thinking about what would make the best TV because it’s a TV show, so that is sort of how I feel about it.”

SEE Colton Underwood’s ‘Bachelor’ contract has ended, so he’s now spilling the tea: ‘There were lines crossed’ by production

Luyendyk’s comments echo what Season 23 star Colton Underwood recently expressed in his memoir, “The First Time: Finding Myself and Looking for Love on Reality TV.” The former NFL player was frustrated with “Bachelor” production, claiming that producers crossed lines and manipulated his now-girlfriend Cassie Randolph into quitting the show, which then gave us that iconic fence jump.

“If you’re gonna make a show, at least give me a fair shot to end up with the girl that I’m falling in love with. Your job as a show is to make us come together. I understand we did [come together] at the end, but I had to take it into my own hands and be extreme with it,” Underwood said. “They value their TV show more so than the love story that they always promote. Actually, there were some things you did that drove us apart and if I didn’t stand up for myself, I probably wouldn’t be with Cassie today.”

Still, Luyendyk does not regret his time as the Bachelor. “I mean, look at us,” he said. “This is the best thing to happen in my life, so I have a love-hate [relationship] with the ‘Bachelor’ franchise, but ultimately I love them because –“

“None of this would’ve happened,” Burnham concluded.