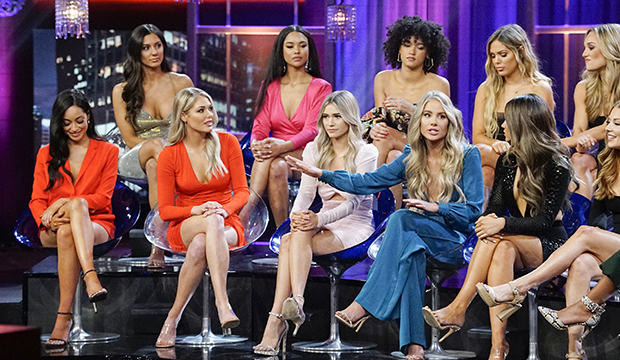 The women told all and didn’t disappoint as Peter Weber faced 17 of his former flames on Monday’s “The Bachelor: Women Tell All” that had sparks and tears flying before all was said and done.

Picking up from last week’s cliffhanger, the episode quickly stirred emotions as Peter fretted over whether Madison would actually appear for the rose ceremony. Having told him about her convictions and not being sure whether she could continue the journey, Madison definitely had the upper hand here. As Hannah Ann and Victoria F. patiently waited for the ceremony to begin, it seemed as if Madison was going to be a no-show. However, she showed up, and surprisingly, Peter gave her a rose, along with Hannah Ann, leaving Victoria shocked and heartbroken. The ceremony ended with Madison cautiously optimistic to discover if love can truly conquer all.

The very entertaining “Women Tell All” reunion gathered nearly all the contestants with the very noticeable and disappointing exceptions of Kelley and Natasha. (Seeing Kelley and Peter reunite in particular would’ve been amazing in terms of drama). Madison’s ultimatum was the first hot topic. Lexi stated that Madison knew what she signed up for. Sydney respected her decision, acknowledging her Southern sisterhood with Madison, having grown up in “the same community” where those convictions are valued.

When the topic shifted to the relationship between Victoria P. and Alayah, former Miss USA contestants, a few ladies honestly felt Alayah was fake. In fact, Sydney called her “scripted” and Lexi accused her of “pageant talk,” particularly her use of the word “disqualified.” Alayah admitted she “word vomits” and has a “princess voice,” but that didn’t stop the slinging arrows: Savannah accused Victoria P. of being fake, resulting in argumentative cross-talking among the ladies that grew so loud and incoherent that Chris Harrison had to quiet them down before things spiraled out of control.

Next, discussion of Champagnegate brought Kelsey into the spotlight. She admitted she was “balls to the walls crazy” for overreacting about the situation and agreed with Shiann’s feeling that her behavior was irrational. When Chris asked her if she felt her meltdown was justified, she said she was not justified in her reaction but was justified in her emotion.

Chris was also curious about Kelsey’s relationship with Tammy, an instigating spitfire secure in her status as this season’s villain who accused Kelsey of excessive crying and drinking in Costa Rica. Some of the ladies spoke up about Tammy’s blunt tactics, leading Tammy to proclaim they were “all swatting saliva with the same guy,” which gave her the right to say what she wanted. However, Kelsey reminded Tammy about the rudeness of her comments, especially for those suffering with diseases such as alcoholism and drug addiction. Of course, that didn’t stop Tammy from immediately sparring with her other nemesis, Mykenna, accusing her of “dancing like a buffoon” for the cameras.

Chris gave Kelsey the first hot seat interview. After watching her clip reel, she admitted she really envisioned a future with Peter and found her elimination truly shocking. She said she still missed him, particularly the “full acceptance of her love” he showed her. When Chris asked about her about being one of the most emotional women this season, she noted “emotions are a good thing… vulnerability is not a negative.” In honor of Kelsey’s status as one of the franchise’s newest emotional icons, Chris surprised her by bringing to the stage special guest Ashley Iaconetti, the “crying girl” from Season 19 of “The Bachelor” (starring Chris Soules) as well as Seasons 2 and 3 of “Bachelor in Paradise” and the first season of “The Bachelor Winter Games.” Ashley presented Kelsey a cute, oversized champagne bottle.

A remorseful Victoria F. followed in the hot seat, revealing she didn’t recognize how much Peter loved her until she saw the episodes. She wished she could change the way she acted and regretted not letting him love her enough sooner. “Peter was the one good thing I had,” she said. “It was easier to push him away than not have him at all.” She also denied allegations she broke up multiple relationships.

Next, Peter took the hot seat, saying his favorite part of the show was exploring all the relationships he had. When Chris addressed the ladies to see if anyone wanted to ask Peter a question, Kelsey said she was grateful for their relationship; Victoria F. apologized for “putting him through hell” which “he didn’t deserve”; Mykenna wished he wouldn’t have put her through the two-on-one date with Tammy if he really knew Mykenna would stay; and Savannah wondered if he regretted giving roses to women who were known for drama, a concern shared by Chris. Peter noted “criticism is good” and felt he can learn from his mistakes.

The evening concluded on a serious note by tackling the subject of online harassment in a tear-jerking and thought-provoking discussion led by Chris and special guest Rachel Lindsay. After noting her firsthand experience of being bullied as the first African-American Bachelorette in 2017, Rachel shared a series of hateful texts aimed at this season’s contestants. All agreed people should be more mindful about the online culture surrounding the show. Hopefully the discussion marks a step forward for positive change.

Next week’s two-night finale, airing Monday and Tuesday, promises to be huge as Peter faces pressure not only from Hannah Ann and Madison but his mother Barbara, who pleads with him to make the right decision.