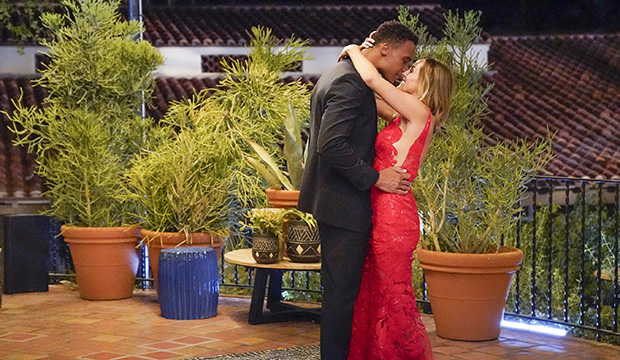 You have to wait two more days to see “The Bachelorette’s” Most! Dramatic! Episode! Ever! Due to election night coverage on Tuesday, the show will air a special episode on Thursday, Nov. 5 at 8/7c.

The episode, the fourth of the season, is the one Bachelor Nation has been waiting for even though everyone knows what’s going to happen, but you gotta see it, you know? This is the one in which Clare Crawley “blew up ‘The Bachelorette'” because she will depart the show with Dale Moss, the guy for whom she’s had googly eyes from the start, and will be replaced by Season 23 “Bachelor” alum Tayshia Adams as the Bachelorette.

The switch-up happened in late July, just two weeks into filming Season 16, but ABC had never officially confirmed it — though it’s had a lot of fun teasing it. The preview for the episode ends with Adams, who will be the second Black Bachelorette, emerging from a pool following a montage of the remaining guys in distress and confused as Chris Harrison tells them, “We have never dealt with anything like this in the history of our show.” Ready to make a splash indeed.

Thursday’s episode will also feature Chris and Bri, the winners of “The Bachelor Presents: Listen to Your Heart,” who will perform their song “Found You” for Crawley on her date with Moss, during which the hairdresser plans on telling him how she feels.

“The Bachelorette” will return to its usual Tuesdays-at-8 slot on Nov. 10.