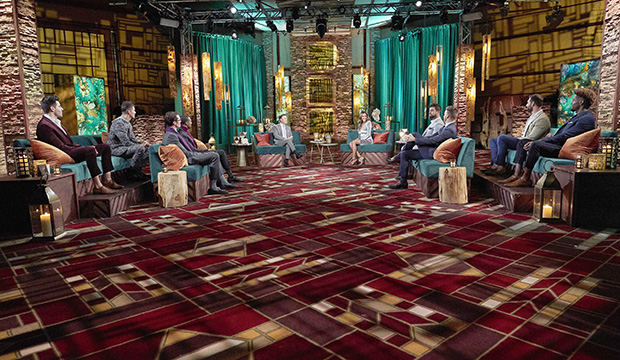 Special back-to-back nights of “The Bachelorette” opened Monday with Tayshia Adams’ selection of her final four, plus the hotly anticipated “The Men Tell All.”

The episode began with Tayshia feeling overwhelmed once again due to the end of the “honeymoon phase.” With Chris Harrison back from a brief hiatus, she brought him up to speed on how things have progressed with her remaining suitors, including the surprising return of Bennett. Chris reminded her how pivotal the upcoming hometown dates will be.

“I think you’re right,” she said. “I don’t want to invest my feelings in these people’s families if there’s really just not anything to build on. But all I’ve been asking is for these guys to be open, honest and vulnerable with me. And every step of the way they’ve done exactly that. I don’t think I’ve ever seen so many men in touch with their feelings and truly pouring their hearts out. I’m taking these hometowns very seriously. Family means everything and I just really want to see them in that setting. I really want to marry someone and have a really happy life after this.” Her next decision at the rose ceremony is critical. Eight men remain, but only four will move on to hometowns.

Tayshia and Blake‘s one-on-one date consisted of a spiritual meeting with Kita, a reiki and crystal master intent to answer questions about their relationship. Communication and connection, particularly an intimate breathing exercise in which Tayshia and Blake had to sustain eye contact for a lengthy period, were key elements. When Tayshia looked into Blake’s eyes, she admitted she didn’t see any signs of validation. It was time for her to say goodbye to Blake. “He’s such a good guy, but at this point there are other relationships my heart is more invested in,” she said. As Blake drove away in the distance, she wept.

SEE ‘The Bachelorette’ episode 9 recap: Just when you thought he was out, one guy (tries to) pull himself back in

Still emotional, Tayshia visited the other guys to inform them of Blake’s departure. She then asked if she could chat with Riley. Knowing how much family means to Riley, she told him she didn’t want to lead him on if her heart wasn’t matching his. Riley was surprised to discover his time had run out but respected her decision. “This is your journey,” he said. “And I am happy to have met you and I don’t regret that at all.” Tayshia was again reduced to tears as Riley drove away.

The next evening, the guys nervously awaited the rose ceremony. But shortly after they gathered, Bennett confidently walked in to join them. “It looks like you’ve seen a ghost,” he said to a sea of shocked faces. Explaining why he returned, he felt as if there was a lot unfinished business that needed to be resolved between him and Tayshia. He also shared that he told Tayshia he loved her, which prompted an eye roll from Noah. When Chris arrived, he informed everyone that Tayshia knew exactly what she wanted to do and didn’t feel it was necessary to have a cocktail party. At the rose ceremony, Bennett and Noah were eliminated, leaving Ben, Brendan, Ivan and Zac as the final four.

“The Men Tell All” followed, featuring Bennett, Blake, Demar, Ed, Jason, Kenny, Noah, Riley and Yosef. At the outset, Chris reminded everyone of how unbelievably unique the season has been: 35 men, two Bachelorettes, at least one proposal and many dramatic turns. The drama between Ed and Chasen was the first topic of the evening, but without Chasen being present, the chat fell flat. The conversation then moved to Bennett and Noah’s feud, with Bennett admitting he felt Noah was actually deficient in all four aspects of emotional intelligence rather than the three previously mentioned. When the topic turned to season hijinks and shenanigans, Chris showed a moment from Blake’s one-on-one date that didn’t air during the episode spotlighting Blake’s arousal while lying next to Tayshia. “I’m not shy,” Blake said. “I was charged.” Chris also showed the hilarious moment Ed mistakenly appeared at his door at 2:30 a.m.

Next, Yosef discussed his contentious exit with Clare Crawley, particularly his shocking remarks about her age and questioning her decision to have the guys participate in strip dodgeball. Chris asked him what struck a chord so strongly about a date he didn’t even participate in. Yosef said the humiliation for the losing team put him over the edge. “I was raw, but I don’t regret sticking up for these guys,” he said. “Do you stand by what all of your actions? Do you have any regrets?” Chris asked. “No, I have no regrets” he replied.

Then Chris asked him a bigger, more personal question. “When you watch that, you’re like, ‘That’s cool, I wanted mind anyone talking to my daughter like that?’” Without hesitation, Yosef replied, “If my daughter did something like that, I would hope someone would call her out.” Quickly realizing Yosef was digging his own grave, Chris gave him some much-needed advice. “I rarely do this,” he said. “I want to try to help you help yourself. I’ve seen a lot of crazy stuff in 20 years, but that was really not a good look. Just the way it escalated, the way you spoke. But what I would love is if you could just see that and [say] ‘I do see that and Clare, for that, I’m sorry.'” Unfortunately, Yosef wasn’t buying it. “I’m not going to apologize to Clare,” he said. “And with all due respect, I really don’t care what any of these guys really think about me. I’m going to stay true to myself.”

Next, Tayshia joined the guys, confirming she was not part of a grand plan to join the show from the beginning. After the initial call, in which nothing was guaranteed since Clare’s journey was still evolving, she only had 48 hours in which to arrive at the resort and begin her own journey. Her emotional breakups with Blake and Riley took precedence. Riley’s heartfelt reaction to his elimination, especially acknowledging he hardly moved the week he returned home, was particularly touching.

The drama continues Tuesday as Tayshia meets the families of her final four.