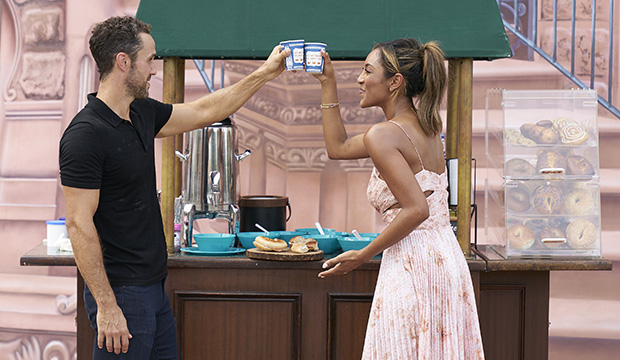 Special back-to-back nights of “The Bachelorette” concluded with the all-important hometown dates, which weren’t actually hometown dates. Due to the pandemic, the families of the final four — Ben, Brendan, Ivan and Zac — were brought directly to the resort. Chris Harrison ensured the guys that each family quarantined and followed protocols in order to participate.

Brendan, the shy commercial roofer from Massachusetts, was up first. His brother Daniel, sister-in-law Kristi and niece Aliyah came to support. Emotional at the thought of seeing his brother again, Brendan informed Chris and the guys that his brother was the closest person he had to a father after his father died. He really admired his selflessness most of all. Before meeting with Brendan, Tayshia Adams discussed where things stood between them. “It’s very fitting that Brendan is my first hometown considering he was my first one-on-one,” she said. “I feel confident in my relationship with Brendan, but I feel like I need a little more validation from him.”

A carnival, a nod to Brendan’s small-town roots, provided the charming atmosphere for the first part of the date with Aliyah joining in on the fun. Allowing Aliyah to participate and fuel interactions provided Tayshia and Brendan the chance to see how well the other would be as a parent. That evening, Tayshia was hoping to build on their foundation. In a moment alone with Daniel, she asked him whether or not he felt Brendan was ready to be married again. “A couple of years ago I would have said he’s not ready right now,” he said. “I really believe now he is. It seems like with both of you going through a difficult divorce, a lot of people would let that negatively affect them for the next five to 10 years. But both of you have a connection, a spark, and a real solid foundation. The right person, going through difficult trials, it’s only going to make you better and stronger.”

SEE ‘The Bachelorette’ episode 10 recap: Tayshia chooses her final four and (some of) the men tell all

Zac, the addiction specialist from New Jersey and oldest of the final four at age 36, followed by whisking Tayshia away on a New York-themed date. After a variety of activities, including lessons in hailing a taxi, sampling New York-style pizza and romantically embracing inside a fountain, Tayshia met Zac’s parents, Douglas and Beatrice, as well as his brother, Matthew. At the outset, Matthew threw Tayshia a curveball when he asked where she and Zac stood in comparison to the other three relationships.

“I’m definitely falling in love with Zac and I really feel like I could really see myself marrying him at the end of this,” she said. “You didn’t answer the question,” he replied. Tayshia quickly recovered by reminding Matthew it doesn’t feel good to talk about other relationships in spite of the reality of the situation. However, Douglas seemed to have a better handle on his son’s progress and was particularly thankful to see him smiling as he’s never smiled before. “I don’t think there’s any question he is smitten at this point in time with Tayshia,” he said. “We are so blessed to be here meeting what we all hope, I think, would be the beginnings of a relationship that will forever flourish.”

Ivan, the aeronautical engineer from Dallas who memorably prodded Tayshia to open up about Black Lives Matter, had the third date. Proud of his Filipino heritage, he planned a cultural cooking session with special help from his 4- year-old niece Khalini. That evening, Tayshia met his parents. His mother quickly admitted she was skeptical about the situation, especially how fast everything seemed to move. Clarence, having been divorced, encouraged Tayshia to have the conviction of looking long term when deciding whether to marry, but she was confident in the fact she was truly ready to marry again. The biggest surprise of the night: the appearance of Ivan’s brother Gabriel, the most influential person in his life.

Lastly, Ben, the Army veteran born and raised in Indiana who calls Venice Beach, California, home, planned a playful date during which he brought the best of Venice, particularly the boardwalk, to the resort. Tayshia enjoyed their time together, but said she still felt Ben was a mystery. That evening, Madeline, Ben’s sister, told her his brother was guarded due to his past. “He really wears his heart on his sleeve and I think in his past that’s gotten him hurt,” she said. “But at the end of the day, he definitely wants to be vulnerable with that special person.”

Later, Ben chatted with Antonia, a family friend. He admitted his feelings for Tayshia were different than with anyone else he’s been with, prompting Antonia to suggest outright that he loved her. He ultimately realized that he was indeed in love with Tayshia. But when it was time to say good night, Ben froze and failed to say he loved her.

SEE ‘The Bachelorette’ episode 9 recap: Just when you thought he was out, one guy (tries to) pull himself back in

At the rose ceremony, Ben was eliminated. He had simply been too emotionally guarded for too long. After walking him out, Tayshia stopped to have a final chat. “I think you’re incredible and you have taught me so much,” she said. “I really care about you. I just feel like I don’t know if our pages are necessarily aligned at this time.” His response: “I’m heartbroken, but I’ll be all right.” The fact that he was unable to show one ounce of emotion didn’t sit well with Tayshia. “It’s extremely disappointing,” she said. “There was no emotion at all. He wasn’t angry, he wasn’t mad, he wasn’t sad. It kind of felt empty.”

Did the past weeks with Tayshia mean anything to Ben? While driving away, he awkwardly seemed to say aloud the things Tayshia would have perhaps appreciated hearing before the rose ceremony: “I’m still in love with her. I really thought we were going to be together. I wanted to marry her. She was going to be my wife. The mother of my children. I should have told her how I felt when I had the chance after my hometown.” Then the kicker: “Maybe she loved me and she thought I didn’t love her back. And if that’s the case, I f—ing blew it.” Poor Ben. You’re probably right.

Next Monday and Tuesday, the season finale will bring Tayshia’s fascinating journey to a close. Who will win her heart? It’s anybody guess!