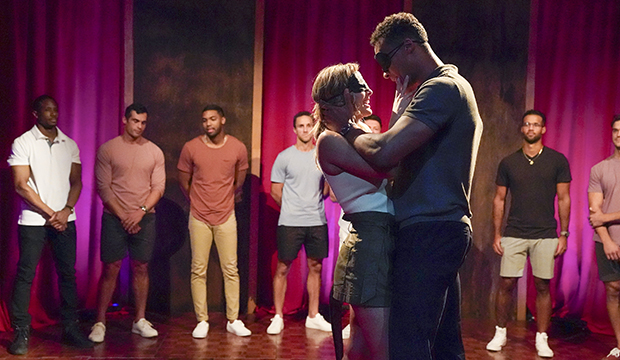 Clare Crawley isn’t pulling any punches on “The Bachelorette.” Having thoroughly sized up the competition last week, Clare is firmly staking her claim as one of the strongest Bachelorettes in franchise history. She makes no qualms as a woman who knows what she wants and isn’t afraid to let her true feelings and opinions show whether you like it or not. Seen lounging in the resort pool at the opening of Monday’s episode, she was pleased to have so many great options at her disposal and already admitting feelings for many guys. But before the episode was over, she would become even more empowered, demanding the guys vie for her attention and ultimately asking one of them to hit the road.

Following Clare’s opening remarks and a peek at Bennett’s large suite and assortment of shoes, Chris Harrison spoke with the guys. He reiterated Clare’s statement that she felt she was in the presence of her husband last week. Dale, memorably dubbed by Clare as her “husband,” said, “The things you appreciate the most in life are the things you work hardest for — so I’m excited.” It is obvious Dale knows he’s leading the pack, but is he just too good to be true?

The first group date of the season belonged to Riley, Jordan C., Yosef, Ivan, Ben, Bennett, Zac C., Zach J. and Dale. The theme was love languages, which allowed Clare to be wooed a la Juliet on a mini balcony with Chris Harrison standing by for moral support. Clare said she wanted to see how the guys give love and receive love. Ben, very open about Clare’s desire for authenticity, said he was someone who valued “choosing the harder path over the easier path.” Ivan notably vowed to pull back his layers, leaving Clare to suggest he “be that onion!” Riley, aware of the theme’s ambience and setting, offered a romantic verse a la Shakespeare.

Dale effectively countered with heartfelt intent: “For me, I can’t remember how to find love. When I saw your energy and your spirit, you really made me feel comfortable committing to that. And I’m committed to giving you everything I have physically, emotionally. I trust you and I’m here for every bit of it. I don’t care who’s watching. I am who I am. And I’m here.” Clare was pleased with everyone’s responses: “It’s been a long time since I’ve heard such kind things from men.”

The second part of the group date involved the guys providing Clare with a special gift. After running back to their rooms and searching suitcases for items, Clare was happy they put a lot of thought into the gesture. Ivan gave her a queen chess piece, Riley gave her a baseball, Ben gave her his favorite T-shirt, and Dale gave her some puppy perfume for her dogs. The third part of the date involved physical touch. Blindfolded, Clare and the guys attempted to be as intimate as possible, which led to a few uncomfortable moments, especially when the guys noticed the chemistry between Clare and Dale. And I would be remiss if I didn’t mention Clare’s sense of smell was on point. (the understated Zach J. left an indelible impression).

That evening, Clare and the guys prepared for quality time, but things quickly turned when none of them stepped up to whisk her away to chat. After a terribly odd pause, Bennett volunteered, but his moment was cut short when Clare refused to let what occurred move on without it being acknowledged. She scolded everyone for not showing they cared. Yosef intended to “speak for the group” by saying Clare was “crazy” to think they were not here for her, but of course, that just made things worse. Riley particularly didn’t like what Yosef said, reminding him he’s a grown man and can speak for himself. Dale, seeing an opening, pulled Clare aside, further solidifying his front-runner status. “You scare me because of how I already feel about you,” Clare said. “I totally have feelings for you.”

After her time with Dale, Clare spoke with Zac C., who has flown under the radar. She opened up about being emotionally abused by her ex-boyfriend and eventually leaving her experience on “The Bachelor” with greater self-esteem and personal growth. “I know I’m not the youngest girl in the room, the skinniest girl in the room, or the prettiest girl in the room,” she said. “But I know I have one of the greatest hearts in the room and I have so much to share and so much to give and I want that with a man.” Preach, Clare! She also enjoyed an impromptu slow dance with Riley, who leapt from the pack and received the date rose, which predictably surprised Dale. But in the end, Yosef’s true colors were on full display. He said Clare’s decision to scold the guys was “hot-headed and immature.” In other words, a villain was born.

The first one-on-one date of the season belonged to Jason, whose fun, easygoing attitude was a highlight last week. With the goal to dig deeper, she asked Jason before the date to write a letter to his younger self (she would do the same). The letter tested his emotions and vulnerability, key factors that scared him as the root cause of the demise of his previous relationships. As Clare and Jason set out on a date that was basically an intimate nighttime therapy session, both agreed to the practice of letting go, unleashing a powerful scream before they began.

After writing a series of destructive words that hindered them in the past (Jason: manipulation, selfish, can’t love, insecure, cold and mean; Clare: needy, selfish, too picky, I’m a bitch), they threw their tablets on the ground with a feeling of relief and release. When discussing their letters, Jason, battling personal demons, revealed he’s burdened by the unease within his parents’ 35-year marriage. “He just gained so many points in my book just by being himself,” Clare said. In addition to giving Jason a rose, Clare defiantly burned her finale dress from “The Bachelor,” perhaps bringing the memories of that rocky journey to a final close.

The second group date was playfully dubbed “Clare’s Extreme Dodgeball Bash.” The catch: it was strip dodgeball. The Red Team (Brandon, Chasen, Eazy, Jay and Joe) and Blue Team (Blake Moynes, Brendan, Demar, Garin and Kenny) battled to join Clare for a cocktail party, but the Blue Team lost, resulting in a nude walk of shame back to their rooms. At the cocktail party, Clare enjoyed a comforting foot massage from Eazy and shared a romantic kiss with Chasen, who said he was bullied in school. Jay’s time was cut short when Blake Moynes unexpectedly arrived to steal a moment with Clare, which infuriated the guys. Clare respected Blake’s decision to see her but rejected his kiss, which left him deflated.

Afterward, Clare saw Brandon, who admitted not knowing much about her, which led to her second-guessing his true intentions. When she pressed him further, he murmured under his breath, “Can we not talk about that?”, sealing his demise in one of the most awkwardly hilarious implosions in “Bachelorette” history. When she told the guys Brandon was sent home, Clare reminded them she didn’t want someone who was superficial or lacked substance. She gave Chasen the rose to Eazy’s dismay.

The next evening before the rose ceremony, Yosef told the guys he didn’t care for Clare’s decision to have a strip dodgeball match. Even though the game didn’t involve him, he nonetheless viewed it as a red flag that left a really bad taste in his mouth and he wasn’t afraid to tell her to her face. Elsewhere, Clare pulled Blake Moynes aside to say how much she appreciated him breaking the rules again to let her know how he felt. She gave him a kiss and a rose. The episode concluded with Clare and Dale rekindling their chemistry with Dale blindfolded for extra measure. “I feel like what’s happening with Dale and I is just magical,” Clare said. “These are my dreams coming true.”

Next week, bombs will drop as the guys grow concerned about how fast Clare and Dale’s relationship is developing while Yosef and Clare dramatically collide.