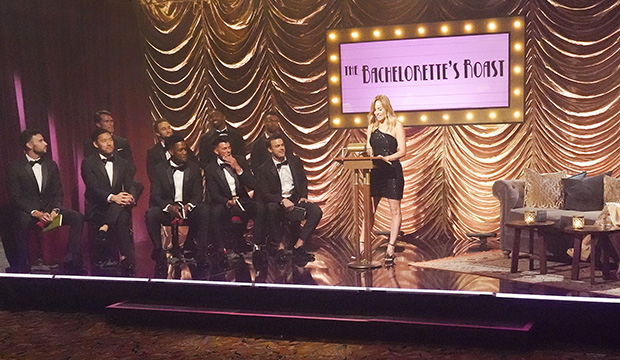 Insults flew and romance became infatuation this week on “The Bachelorette” as Clare Crawley battled a villain and sought comfort from her “husband” once again.

Continuing from the events of last week, the episode began with anxiety in the air as the guys clamored for quality time with Clare prior to the rose ceremony. Yosef, still perturbed by Clare’s decision to have a naked dodgeball competition, questioned her character and maturity. “That’s just raunchy humor,” he said about naked dodgeball. “Being a father, if I were on that date, hands down I would’ve said, ‘No, I’m not going to participate.’ We all have our line that can’t be crossed, and that’s my personal boundary.” Riley questioned whether or not Yosef would take into account the importance of giving Clare respect, but Yosef wasn’t going to back down. “I’m looking forward to telling Clare exactly how I feel and wash my hands of this atrocity.”

During his heated conversation with Clare, Yosef explained how much he initially enjoyed his group date but found her to be disrespectful by the end of it. He was “appalled” to hear about the naked dodgeball competition, finding it “humiliating and degrading.” “I expected a lot more from the oldest Bachelorette that’s ever been,” he said. “And I can’t believe that actually occurred. You’re not setting the right example for my daughter. I’m ashamed to be associated with you. I can’t believe I sacrificed so much to be here just to watch this distasteful and classless display.”

Clare reminded him that on the group date she made a point to say she wanted guys who were there for her and not merely to “bro out” with each other. “I’m looking for a husband,” she said. “I’m looking for someone to love me.”

Yosef proceeded to interrupt, which was ultimately the last straw. “Do not ever talk to me like that,” she exclaimed. “I never thought I’d ever have to tell any man I would never want them being the father of my child and I stand by that. I would never want my children having a father like you. Get out of here.”

Wrapped in Dale’s arms, she wept. “Hard things are inevitable in life,” she said. “Mean, crappy people are inevitable in life. Literally all I’ve ever wanted is a man like Dale who will come over and protect me and make sure I’m OK and not have to go through it alone. Dale is everything that I’m looking for. Everything I want that I can’t put words with, things you can’t explain. I can’t believe it’s not even the second rose ceremony yet and I’m so falling in love with Dale.” Soon after, Clare confided in Chris Harrison how “awesome” Dale is and how much she loved him. Moving forward with the rose ceremony, Blake Monar, Garin and Tyler S. were sent home.

The next day, DeAnna Pappas of “The Bachelorette” Season 4 visited with Clare to see how the season was coming along. Clare notably described Dale’s arrival as “electricity.” “He checks the boxes that I don’t realize are boxes,” she said. She also shared she kept Dale’s pants he ripped on the group date as a souvenir. Not only did she keep them, but she enjoys smelling them. That’s love!

Jason, Jay, Eazy, Chasen, Blake, Ed, Riley, and Dale were chosen to go on a group date, but Clare scrapped those plans in order to have a longer cocktail party. Of course Dale chatted with her first. When they arrived at her suite, they cuddled and smooched in her bedroom. The guys grew suspicious when they were gone for an hour. Eazy searched for them and ultimately figured they were at Clare’s suite. Dale and Clare downplayed their time together, but Eazy and the guys had a hunch something was up. A mad rush for quality Clare time ensued, including Dale going back to Clare for more kisses. In the end, Dale received the group date rose, frustrating the guys and causing them to question not only where they stood with Clare but her credibility. In fact, Zac C. brought up the rumor that perhaps Clare and Dale had interacted on social media prior to filming.

The next day, Zach J. had a one-on-one spa date with Clare (an attempt to see if his nervous energy would return to excited energy), but she simply couldn’t get Dale off her mind. Once she was ready for them to take a pause before getting ready for dinner, she leaned in to kiss Zach, but she awkwardly felt him pull away, which surprised him. She also felt as if he grabbed her when she tried to walk away from the situation, leaving her extremely uncomfortable. At dinner, Zach was met by Chris Harrison to not only tell him Clare wasn’t joining him, but that he would be eliminated.

SEE ‘The Bachelorette’ episode 2 recap: Clare has the most awkward group date of all time while a villain emerges

At the next group date, Ben, Bennett, Brendan, Demar, Ivan, Joe, Jordan C., Kenny and Zac C. participated in a roast led by Margaret Cho with the other guys in attendance. Bennett particularly went hard on Dale (and even dropped the mic), which didn’t seem to go over well with Clare, accusing him of jealousy and hostility.

That evening at the cocktail party, Clare questioned the guys about their feelings on Dale, which perturbed them, including Zac C. who likened their interaction to “Gossip Girl.” Kenny told the guys he felt he was wasting his time if Clare is only interested in Dale. “Who else has she really shown that kind of interest in in this house? Nobody comes to mind.”

When Clare rejoined the guys, she said she wouldn’t hand out the group date rose and would proceed to the rose ceremony the following day. Away from the guys, she said it wasn’t OK for them to make fun of her connection with Dale. Holding a rose, she told herself, “Clare, thank you for showing up tonight. I just want to let you know that I’m so proud of you for being bold, saying how you feel, speaking up, living your truth, and showing up for me. You, tonight, deserve this rose.”

“She doesn’t really care about anybody else or giving anybody else a fair shake,” Kenny told the guys. “If you want to go be with Dale, go be with him now, and we’ll all go home. If you already have a boyfriend, what the f— am I doing here?” Is a mutiny forming among the guys? Is Clare ready to bring her season to an end? Is Tayshia Adams ready for her debut? Looks as if all will be revealed in the next episode. Bring it on!