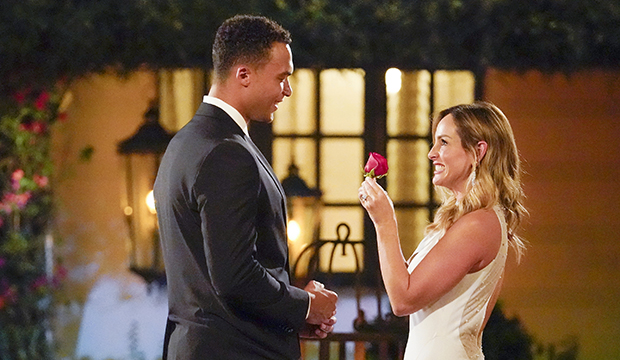 The Clare and Dale Show reached its climax on Thursday’s very special episode of “The Bachelorette.”

The episode began with the guys frustrated about Clare Crawley’s decision to forgo the group date rose. They simply weren’t buying her excuse that she didn’t have enough time with them. “She’s not even giving anybody else in this house an opportunity,” Kenny said. “It’s almost like she doesn’t care to learn about anybody else. Why am I here?”

In her presidential suite, Clare said her connection with Dale is so strong that it feels like she’s known him forever. “It’s that intangible chemistry that you just can’t make up and you can’t replace,” she said. “It’s something that is just so rare, to feel so connected to somebody when you’ve only known them for a short period of time.” She feels her journey so far is about “respecting the process but also going for what you want.” And of course, what she wants is Dale.

When Chris Harrison stopped by to see Clare, he told her how unhappy and confused the guys are. “These are good guys and they’re not dumb,” he said in one of his most serious tones. “These are smart men. They know what’s going on. The path we’re on right now — we can’t continue.” Clare admitted she was “totally head over heels” for Dale and surprisingly revealed that she browsed all of the guys’ social media pages during quarantine, including Dale’s. She particularly related to Dale’s posts about his mother and sister, which struck an emotional chord with her. Chris asked if she spoke to Dale during quarantine, to which she adamantly swore she didn’t.

“I’ve just spent years knowing what I don’t want, and it’s given me so much clarity coming into this, especially in quarantine, to focus it on what I do want,” she said. “I feel like Dale is my match. He meets me on a level emotionally of what I’m looking for. Everything I want out of a relationship. Everything I want out of life.” Is Dale the guy that reminds Clare of her dad? Clare, in tears, believed so. “He just continually shows up for me.”

Asking what she should do next, Chris said things would have to be reinvented. “In your mind, is this over?” he said. Clare said yes. “Congratulations,” he replied. “You’ve just blown up ‘The Bachelorette.’”

Back with the guys, Chris told everyone there wouldn’t be a cocktail party or rose ceremony. He also asked to speak with Dale alone, ultimately telling him Clare only wanted to spend time with him tonight. Prior to their meeting, Clare realized the gravity of the moment. “It’s a scary situation to express your feelings towards somebody for the first time,” she said. “I’m taking a risk. Love innately is taking risks. And if he’s not at the same place as me I’ll be crushed.”

In a striking red gown, Clare greeted Dale for dinner. She told him how crazy it seemed that she’s grown so close to him even without having a one-on-one date. She also said she had been praying for a man who had the same qualities as her father, someone strong and compassionate. During their revealing conversation, showcasing Dale at his most vulnerable, they shared familial similarities, both being especially grateful for their parents being married over 40 years. Dale also discussed how broken he was following his mother’s death, noting how emotionally suppressed he was for two years. But meeting Clare stirred new emotions. After they shared a passionate kiss, Clare was thrilled to know Dale said he loved her.

“I’ve been waiting forever for this feeling,” she said. “To every single person who has ever told me to settle and the man I’m looking for is not out there — I’m having dinner with him right now.” After dinner, the couple was serenaded by Chris Watson and Bri Stauss, winners of “The Bachelor Presents: Listen To Your Heart.” The evening ended with them romantically entwined on Clare’s bed.

The morning after, Clare and Dale were still embracing in the afterglow. Clare admitted how game-changing everything had become. “I do have so many other great guys here and I genuinely wanted to get to know these guys and to give them a chance but nothing compares to what I have with Dale — nothing,” she said. “I could most definitely and gladly spend the rest of my life with Dale.”

As Dale said goodbye to Clare and rejoined the guys, Blake, Chasen and Eazy reflected on the past 18 hours. “I think they would blow me away if he slept over,” Blake said. “Clare wouldn’t do that this early in the game,” Chasen replied. “I don’t think she would do an overnight with Dale and take that intimacy to another level. I just don’t see it.” Bless his heart.

Chris checked on Clare for a report on her evening with Dale. She said the time with him was priceless and appreciated the clarity and reassurance. She was particularly happy he didn’t run away. “He’s exactly what I’ve been looking for. He’s my person.” Chris acknowledged the unprecedented nature of everything but couldn’t deny Clare had fallen in love and found the man of her dreams, which are the goals of the show. The next step: proposal.

Addressing the guys, Clare told them they were an amazing group yet also reminded them how ready she was to find the love of her life and that she found that love with Dale. As expected, looks of disappointment filled the room. “I’ve always said I’m a woman that knows what I want,” she said. “And I’m going for it. I hope what I have found in Dale I seriously want the same for you.”

The reaction was swift. Jay was bummed. Blake was scared and worried she would be hurt and devastated. Kenny asked if she spoke with Dale before the show, which she adamantly denied. He also asked her to offer an apology to the group. “You should apologize for faking it when you should’ve admitted you were in love with Dale after the first night because that’s kind of what it looked like.” “I’ll apologize if I wasted your time,” she replied. “I’ll apologize if I hurt you, but I’m not going to apologize for love.” After she left, Blake let it be known that he bought books on Alzheimer’s and dementia to better understand Clare’s emotions in relation to her mother. “I fully dove in to make sure I could potentially be that fairy-tale ending for her if I got there,” he said. “Why did I invest so much and not get anything in return? I’m just shocked.”

Chris met with Dale to hear his views. Dale said he was falling in love with Clare and is willing to explore where the relationship leads. He told him Clare broke up with all the other guys and it was the end of the journey. The final step would be his proposal. Back at her suite, Clare grappled with emotional pressures and fear but entered the evening confident nonetheless, appearing radiant in a stunning white gown. Clare told Dale he embodies everything she wants in a man such as strength, kindness and compassion.

SEE ‘The Bachelorette’ episode 3 recap: Clare stops faking it (as in her interest in guys not named Dale)

“I’m so in love with the man that you are,” she said. “You made me feel like everything I’ve ever been through, all the ups and downs and other relationships, it was all worth it because I’ve got you right now. Most importantly, you’ve shown me you would never run away and never leave me. You continue to show up for me and I promise you I want to show up for you each and every single day. You make me so happy.”

“I know without a shadow of a doubt you would go to the end of the world for me and I’ve never had that and I’m so grateful for that,” Dale replied. “I want nothing more than to keep moving forward, to be there for you each and every day.” He asked if she would marry him. She accepted. Dale accepted the final rose. Let the engagement begin.

The next day, Chris addressed the guys, updating them about Clare and Dale’s engagement. Disbelief was apparent. Chris admitted he felt the guys were cheated due to what happened. But just to be sure how they felt, he asked them if they could really look past their feelings with Clare and move on. If they couldn’t move past it, no hard feelings. But if they were willing to stick around and find a new opportunity for love, their journey would continue. Bennett and Kenny were particularly looking forward to starting over but others, such as Jason and Blake, weren’t as sure.

That evening, all 16 remaining guys agreed to stay. Chris announced they would soon meet the new Bachelorette, someone who was beautiful, kind, charismatic, and ready to find love. Chris stepped outside to greet Tayshia Adams. He asked her if she felt the guys would be willing to accept her. “This process moves very quickly, and you start to invest a lot of feelings really early on,” she said. “I don’t know if that’s the case for some of them, and if so, I am more than happy to have that conversation with them if they don’t feel it’s the right time for them or I’m not right for them. I feel this is a right moment in time. I wouldn’t be standing here if it wasn’t meant to be. That’s what I prayed for and here I am.”

Next week, Clare and Dale return to tell all and a new chapter of this whirlwind season begins.