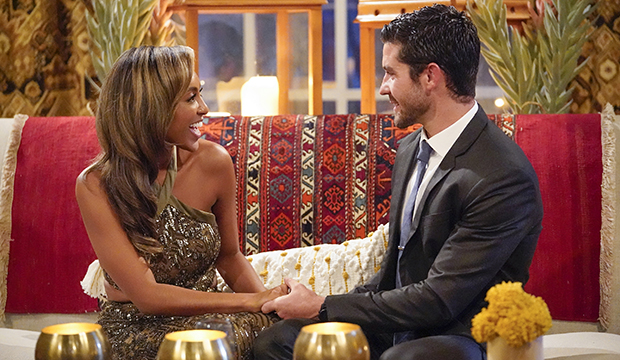 Picking up from last week’s cliffhanger, “The Bachelor” kicked off with Tayshia Adams‘ arrival, which was met with genuine enthusiasm from Chasen, Ben and Zac. Her nervousness was apparent, but her “Bachelor” experience allowed her jitters to feel relatable among the group. She also reminded them she was aware of what they had been through with Clare Crawley and respected their decision to stay. Above all, she hoped they would trust the process and take a chance on her. “I really hope you guys don’t close off,” she said. “I want to lean into this and I want you also to lean into it.”

Ivan, among many who have flown under the radar, was the first to steal Tayshia away. He was impressed by her confidence but wanted to learn more. Riley also scored points by opening up about his career as a New York City attorney. Jordan admitted to Tayshia he wasn’t sure he was going to stay, but her smile and eyes won him over. “It’s a different level of excitement that brings me back,” he said. Blake felt relieved as to how real Tayshia was with him, but he still asked her to be patient due to expectations raised from being emotionally invested in Clare. Jason admitted he still had feelings for Clare but also wanted to find love nonetheless.

While chatting with Brendan, Tayshia was surprisingly approached by Chris Harrison, who told her another limo with a new group of guys would soon appear. The new arrivals: Spencer, 30, a water treatment engineer from La Jolla, Calif.; Montel, 30, a gym owner from Boston; Peter, 32, a real estate agent from Framingham, Mass.; and Noah, 25, a registered travel nurse from Tulsa, Okla.

Assessing the whole group, Tayshia was immediately smitten with Spencer, but she also found Zac intriguing. As expected, she gave Spencer the first impression rose. The next day, Tayshia reflected on her first evening as the Bachelorette. She noted the guys were welcoming and sweet but also feared some may still have feelings for Clare.

Blake, Riley, Zac, Jordan, Noah, Peter, Kenny, Jay, Eazy and Spencer received the first group date. A friendly yet bloody competition of splash basketball ensued. Spencer, who has irritated a few guys ever since he stepped inside the resort, took an elbow to the mouth from Riley. In the end, the Blue Team (Spencer, Noah, Jay, Eazy, and Zac) won a date with Tayshia complete with barbecue and open bar. That evening, Tayshia joined all 10 guys pursuing the group date rose. She found Eazy’s energy infectious and deemed Zac comfortable and a pleasant surprise. In the end, Eazy received the rose. Along the way, Jason admitted his feelings for Clare were too deep and, after speaking his truth to Tayshia, decided to leave.

Brendan received the first one-on-one date. On a stroll through the resort on horseback, Tayshia and Brendan attempted to grow closer but was repeatedly and humorously interrupted by Chris with margaritas, ice cream and cold coconuts. Arriving at the pool, Brendan was finally able to kiss Tayshia and basically leapt to the front of the pack. “He’s patient and kind and seems very humble,” Tayshia said.

SEE ‘The Bachelorette’ episode 4 recap: Clare blows up the show and gets the man of her dreams

That evening at dinner, Brendan revealed he married his high school sweetheart while in his early twenties. To his surprise, Tayshia revealed the details of her marriage and divorce. Both shared similarities of having felt as if they failed. “Divorce is a really big deal,” she said. “I thought I was dying when I was going through it. So, it was really therapeutic to hear him saying all the words my heart has felt the past two years. I felt I wasn’t alone. We kind of bonded on a different level.” Brendan not only received the date rose but joined Tayshia for a romantic fireworks display.

The episode also featured the return of Clare and Dale, who did a mini tell-all. Speaking with Chris, Clare says her time with Dale has been “a dream come true.” She recognized her connection was truly love at first sight as well. When asked why she was so nervous on proposal day and proposal night, she said “I’ve never ever had a man show up. … I just need to know he would never leave and never let me down on that front.” Dale appeared next and agreed seeing Clare was love at first sight. “I love her with every ounce of my being,” he said.

Next week, the guys battle for Tayshia in a grudge match, and Chasen and Noah possibly emerge as villains.