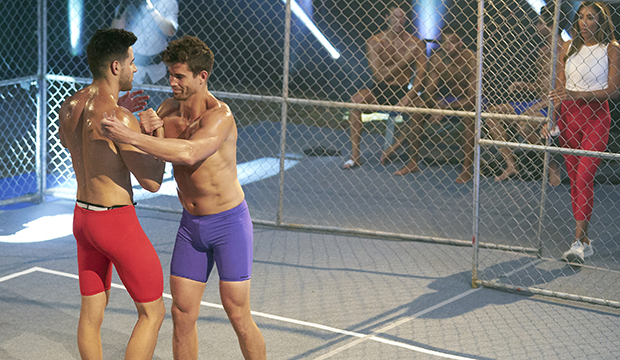 Still reeling from her romantic, revealing date with front-runner Brendan on “The Bachelorette,” Tayshia Adams opened this week’s episode acknowledging the bar has been set high for all the guys. She views Brendan as “husband material” but was eager to see how the next group date would play out nonetheless.

The group date consisted of Montel, Ivan, Demar, Ben, Chasen, Ed, Joe and Bennett. Dubbed “The Grown Man Challenge,” a search for a Grown-Ass Man, the fun and games were spearheaded by married “Bachelor in Paradise” alums Ashley Iaconetti and Jared Haibon. Tayshia, who wants to find a man and not a boy, was excited to put the guys to the test. Harvard grad Bennett felt comfortable with his super smart status but awkwardly failed both the math and spelling portions. Tug-of-war followed with Ivan and Ben succeeding and Bennett opting out due to a football knee injury. Lastly, a cooking competition found Bennett scoring much-needed points, resulting in Tayshia calling him “bougie” and admitted being the same. In the end, Bennett won the title of Grown-Ass Man, while Ed was humorously deemed the Man Child and thus responsible for carrying around a toy baby.

At the after-party, the guys were less than thrilled by Bennett’s victory, particularly Chasen who questioned him not competing in the physical challenge. During his alone time with Tayshia, Chasen opened up about his journey for love, revealing that he had never been in in love despite previous relationships. While Tayshia and Chasen chatted, Ed and Bennett revealed issues with Chasen’s personality. “Chasen’s a fraud,” Ed said. “Chasen’s a phony. The guy is more or less an actor in my mind. He just kind of repeats what he thinks he’s supposed to say. It’s just not believable. The longer Chasen spins this web of deceit over to Tayshia, he’s going to be around.”

SEE ‘The Bachelorette’ episode 5 recap: Tayshia brings everything back to normal (and gets more men)

After sharing a passionate kiss with Ben, Tayshia regarded Ivan, who at one point blindfolded her while serving a strawberry, as a dark horse due to his maturity and depth. During Ed’s time with Tayshia, he told her about his dislike of Chasen, including the fact that he used similar words to describe both her and Clare, and that he may also be on the show just to attract more Instagram followers. When Tayshia asked to speak with Chasen, he defended his views, but his actions still put Tayshia on alert. “The way I navigate through these situations is I trust my instinct and my gut intuition,” she said. Rejoining the guys, Chasen had strong words for Ed but remained level-headed. At the end of the party, Ivan, whose romantic gesture sealed the deal, received the group date rose. He is no longer flying under the radar.

At the cocktail party the following evening, Chasen clearly had Ed on his mind once again. Attempting to prove he doesn’t see Clare and Tayshia the same way, he thought of a new word to describe Tayshia: “smokeshow.” Tayshia, who said she was beginning to have feelings for Chasen, warned him that his behavior was concerning and not a good look. At the rose ceremony, Chasen escaped the chopping block. Jay, Montel and Peter were eliminated.

The next day, the group date consisted of Eazy, Brendan, Joe, Jordan, Spencer, Ben, Ed and Chasen, who competed in a wrestling match. The practice rounds featured WWE Hall of Famer Amy Dumas and UFC fighter Tatiana Suarez, and was hosted by Chris Harrison and Wells Adams. Unsurprisingly, the main event belonged to Chasen and Ed. However, Ed, hoping to remain safe while fighting for Tayshia’s heart, pulled Chris aside before the match to tell him that he didn’t feel comfortable competing due to shoulder injuries. With Ed forfeiting, scrappy Noah volunteered to fight Chasen. Noah held his own and battled with grit, but Chasen won the match. Even so, Tayshia was happy Noah showed initiative and invited him to join the other guys at the after-party to their dismay.

At the after-party, Noah acknowledged he wanted to take risks. Part of that risk was respecting Tayshia’s request that he immediately shave his mustache. He allowed her to do the honors and she loved his vastly improved hotness. His reward: the group date rose. Ben, infuriated not only about not having time with Tayshia but Noah receiving the rose, vowed not to let the situation go unresolved.

Next week, emotions are tested as Noah continues to get under everyone’s skin and Tayshia warns the guys that she’s not going to stand for anyone starting drama for no reason at all.