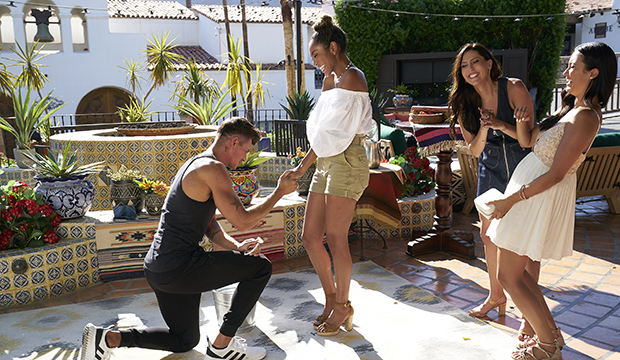 This week’s “The Bachelorette” began the morning after the newly mustache-less Noah received the group date rose, fueling disappointment and tension from the guys who felt cheated that he was invited to come along on the date in the first place. Ben, the handsome Army veteran Tayshia Adams humorously regarded as “trouble,” was hoping to make inroads having yet to receive a coveted one-on-one date, let alone significant alone time. “I’m frustrated about the way last night went,” he said. “I’m kicking myself for not doing the things I needed to do to get the time because the time is what I was after. The rose is cool, but the gift is the time with Tayshia.”

When Chris Harrison arrived to meet all of the guys, he revealed that Bennett, Ivan, Blake, Riley, Demar, Kenny and Zac would compete for a romantic, intimate one-on-one date. They would have to write an original love song and perform it for Tayshia. An assortment of instruments, ranging from an accordion and tambourine to a trumpet and guitar, awaited them if need be. The majority were musically challenged, but Zac scored points for at least attempting to rhyme, while Bennett’s decision to rap managed to fall somewhere in the vicinity of awkward and pleasantly surprising (“You don’t need no Harvard degree to be in Paris eating brie with me”). Demar, with guitar in tow, seemed to generate the most positive response thanks to his charming “Mocha Latte” number, but Ivan, whose heartfelt moment was more poetry than song, won Tayshia’s heart in the end.

Ivan arrived at Tayshia’s suite for a laidback evening of chat, room service and games, complete with a pillow fight. Tayshia enjoyed the fact she could have fun with him but really desired to go deeper, especially about his family. Ivan delving into the pain he felt seeing his brother imprisoned really struck an emotional chord, particularly in relation to George Floyd’s death and the need for criminal justice reform. Ivan encouraged Tayshia to open up to him and feel more comfortable talking about delicate yet important topics, such as race since both are biracial. She recognized how special their relationship had become and gave him a rose. “He understands me more than anyone else can,” she said. “Honestly, that’s what I’ve been looking for. I feel like Ivan and I could have a really beautiful relationship. I’m excited about him.”

The next day, the group date belonged to Zac, Kenny, Demar, Bennett, Riley and Blake. Season 14 Bachelorette Becca Kufrin and Season 23 “Bachelor” contestant Sydney Lotuaco joined Tayshia to oversee the guys competing in a physical, emotional and mental truth or dare challenge. Some of the dares included drinking disgusting smoothies and giving a phone orgasm. That evening at the after party, Bennett, who has been on somewhat of a roll lately and defying the odds at every turn, opened up about how real it felt to offer a playful proposal to Tayshia, having been down that road before. Even so, she gave the date rose to Zac based on an intriguing amount of chemistry. “I want to get to know more about him but it also feels comfortable like we’ve known each other for a while,” she said.

Not knowing where they truly stood before the next rose ceremony, Ben and Ed decided to pay Tayshia a visit. However, Ed comically mistook Chris Harrison’s suite for Tayshia’s. When Ben arrived at Tayshia’s suite, he apologized for making Tayshia feel disappointed in him and she forgave him.

At the cocktail party, Noah told Tayshia that some of the guys have questioned her integrity, which infuriated her. Soon after, she scolded them for thinking her decision-making might not be intentional and that she was giving out roses just for the sake of drama. “I’m a grown woman,” she said. “I can make decisions based off of what I want to do and if you’re going to question me, I’ll gladly walk you outside.” After Tayshia cut the cocktail party short, the guys were fed up with Noah. “I was robbed of time with Tayshia this evening,” Bennett said. “I’m here for love, not for breastfeeding Noah.”

At the rose ceremony, Chasen, Kenny, Joe and Jordan were eliminated. Next week, Noah’s villainy rises as Tayshia decides whether or not to send him or Bennett home for their “teenage boy drama.”