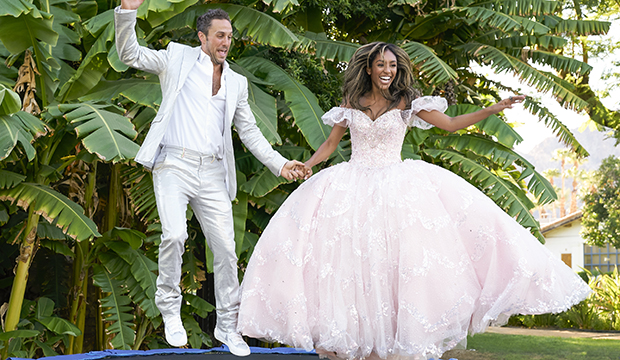 The best and most refreshingly revealing season in “Bachelorette” history continued this week with one of the best group date competitions and a tense final showdown between an Oklahoma nurse and a Harvard grad.

The episode opened with Tayshia Adams receiving a pep talk from special guest JoJo Fletcher from Season 12 of “The Bachelorette.” Anxious about how overwhelming the competition has become, especially having fallen in love with multiple men, Tayshia eagerly awaited JoJo’s advice. She reminded Tayshia not to overthink the process although both agreed they didn’t like hurting anyone’s feelings. But Tayshia revealed her biggest fear is the fact that she had been married before and didn’t want to repeat any mistakes. “I’m not just going to get engaged to someone because it feels right in the moment,” she said. “I need to know that I want that to be my forever.”

Next, Chris Harrison explained the schedule of events with the 12 remaining men. There would be three dates this week, two one-on-one dates and one group date. He also informed them that JoJo would be filling in as host for a few days while he was away taking his son to college.

Zac received the first one-on-one, which began with him and Tayshia dressing up to take fake wedding photos. The shoot, deemed surreal by both, was overseen by creative director, photographer and designer Franco Lacosta. Tayshia embraced the playfulness of the date, but the thought of actually wearing a wedding dress again stirred her nerves and anxiety. “I’m so incredibly nervous,” she said. “Wedding photos speak about an important time so it’s a big deal.” Hesitant at first to wear a veil for maximum effect, Tayshia ultimately took the shoot in stride and felt confident with Zac by her side. “I tried to embrace taking that moment and trying to envision Zac being the person I’m at the altar with at the end of this,” she said. “I’m not going to lie — it didn’t scare me. It didn’t scare me at all.”

SEE ‘The Bachelorette’ episode 7 recap: Tayshia bonds with Ivan over race and fires back at the guys

Over dinner, Tayshia mentioned Zac’s attributes: older, mature, established, has life under his belt, and is close to his family. But she wanted to know more about him. He revealed he was diagnosed with a brain tumor at 23 and as a result of the surgery became dependent on drugs and ultimately alcohol. He also spent time in rehab and was previously married. The fact that he opened up so completely and showed vulnerability pleased Tayshia, who gave him a rose. “I believe in miracles,” he said. “I shouldn’t be sitting here. If I know I’m a miracle, who’s to tell me I can’t come on a TV show in the middle of a national pandemic and find love with someone as amazing as Tayshia? No one. I won’t let them.”

The group date consisted of Spencer, Ivan, Ed, Blake, Brendan, Riley, Demar, Bennett, Ben and Noah. The challenge was to see who among them would succeed in art and expression. Activities included sketching nude models, sculpting clay and creating a self-portrait. When the self-portraits were revealed, the standouts were numerous and accented by wonderful, deeply personal testimonials ranging from Ivan’s acknowledgement of his elderly father and Brendan’s imaginative picture frame to Riley’s story of reconnection with his mother and Blake’s recollections of his turbulent upbringing. However, Ben, in a shocking move, opted for a totally different approach at the last minute by stripping naked as a sign of his vulnerability and openness.

“This experience is about taking your walls down,” he said. “I talk a big game, but it’s hard to express my emotions. Today has been eye-opening for me. So, figuratively and literally, I’m going to let my guard down. This is me showing up for you. As myself, I’m going to give this physical body to you and also everything inside. Because what you see is only a small part of who I am and I’m so excited to share that with you.” In the end, Tayshia, overwhelmed by everyone’s raw, honest vulnerability, decided not to declare a winner. Who could blame her? It was an embarrassment of riches, speaking highly of the quality of candidates and their emotions.

At the after-party, Ben, having revealed he had an eating disorder for 15 years, received the date rose. But before Tayshia said goodbye, she warned Bennett and Noah that she would get to the bottom of the rift between them. “I’m not on ‘The Babysitter.’ I’m on ‘The Bachelorette,’” Bennett said. “One of us can focus on a relationship with Tayshia and the other can focus on creating drama. No one has upset Tayshia other than Noah.”

The second one-on-one belonged to Eazy, who shared a haunted experience with Tayshia centered on the legacy of oil baron William Morgan. After the thrills and chills, the couple sat down for dinner. Eazy admitted he was falling in love, but Tayshia was unable to give him the rose because she simply wasn’t in the same place emotionally.

The next day, JoJo reminded everyone that Tayshia was still bothered by the tension between Bennett and Noah. The only way to settle scores would be a two-on-one in which one stays and the other hits the road. Before meeting with Tayshia, Bennett and Noah had one last opportunity to evaluate the situation. Bennett gave Noah a parting gift, a box filled with remembrances of their time on the show together, including a bandana, mustached socks and a book about emotional intelligence. When Tayshia arrived, Bennett particularly denied he questioned her integrity regarding Noah. The episode ended on a cliffhanger as Tayshia wondered what was inside Bennet’s box.

Next week we’ll find out who was sent home and a lie detector challenge reveals Zac’s cheating past. Buckle up!