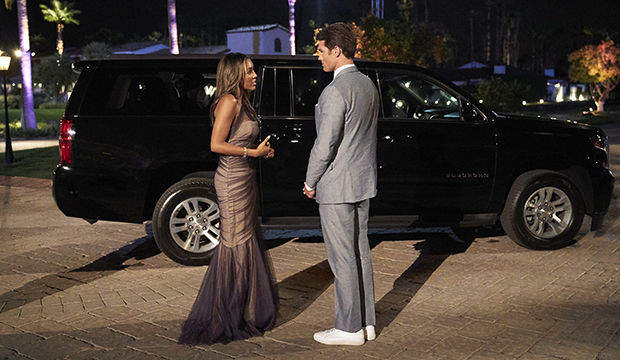 Picking up from last week’s two-on-one cliffhanger, the beginning of Tuesday’s “The Bachelorette” found Tayshia Adams in the middle of Bennett and Noah’s bickering, which she dubbed “teenage boy drama.” Bennett brought up the fact that every time he speaks with Noah it’s like speaking to a 14-year-old. On the other hand, Noah didn’t appreciate Bennett telling him he had a “0 percent chance” of being with Tayshia in the end. “The fact that I have to sit here and listen to you guys talk about this is ridiculous,” Tayshia said.

When Tayshia asked about Bennett’s box, his gift of remembrances to Noah, she asked if Bennett wanted to talk alone, especially since she felt he had questioned her integrity. She didn’t feel he had the right to tell anyone she wouldn’t end up with someone. The guys were on the show for her — not him. Instead of digging a deeper hole, Bennett apologized but felt the drama being stirred was coming solely from Noah. His attempts to school Tayshia on self-awareness, self-management, social awareness and relationship management fell flat, but Tayshia took his words in stride nonetheless.

While alone with Noah, Tayshia told him she was glad to be able to uncover who he was with each conversation but had grown confused about him due to the drama, in which he seems to be the common denominator. Noah pushed back, blaming Bennett for having a condescending attitude, something he felt Tayshia should be more aware of in case she ends up with him and has to deal with that crucial aspect of his behavior. “I think you deserve more than that,” he said. “I don’t think people should be talked to like they’re less.”

When the moment of truth arrived, Tayshia, after thoughtful explanations of the pros and cons of each — particularly Bennett’s worrisome condescension and Noah’s uncertainty of being ready for marriage — she asked Bennett to leave. Visibly surprised, Bennett apologized again, but the damage had been done. Even so, Tayshia admitted she hoped she made the right call. “Not the goodbye I expected at all,” she said. “Sending Bennett home didn’t feel right. He couldn’t understand. He was trying to figure it out and it just felt so weird. It just did not feel right, especially when he’s such a good person. I just hope I’m making the right decision.” Rejoining Noah, Tayshia reminded him that Bennett’s departure wasn’t his victory and stopped short of giving him the rose, choosing instead to make him wait along with the others at the rose ceremony.

At the cocktail party, Noah brought the guys up to speed on Tayshia’s big decisions. When Tayshia arrived, she emphasized the fact she was glad to put the drama aside and was simply excited to see everyone. “As difficult as that two-on-one was, it was so important for me to address it,” she said. “I’m happy that it’s done and it’s in the past because I really just want to focus on the relationships I have left.” At the rose ceremony, she notably spared Noah and eliminated Demar, Ed and, in somewhat of a surprise, early favorite Spencer.

The next day, guest host JoJo Fletcher informed the seven remaining guys that hometown week is approaching. Zac particularly became emotional at the thought of Tayshia meeting his parents, whom he described as his heroes. With tears flowing, the sheer reality of it all hit him hard. JoJo also dropped off a date card, a one-on-one with Ben, which began as a playful treasure hunt around the resort. At dinner, Tayshia aimed to peel back the layers of Ben’s insistence of being perfect and guarded. Having grown up with expectations of perfection, he admitted longing for more emotionally, giving credence to his reluctance to be open and vulnerable. He also shared how important his sister is in his life, especially after she helped him during a low point when he contemplated suicide. Happy that Ben took positive steps toward progressing their relationship in what she felt was a breakthrough moment, Tayshia gave him a rose. Their evening ended with a private concert by country singer/songwriter Adam Hambrick.

The group date consisted of Zac, Brendan, Ivan, Noah, and Riley, who were each faced with taking a polygraph test. Tayshia, who noted telling the truth was important to her having been divorced, competed first and drew surprises when the polygraph caught her in a lie regarding whether or not she regretted sending anyone home. (Brendan suggested Bennett). Highlights of other tests: Brendan suggesting he wasn’t ready to meet Tayshia’s family; Riley’s real name is a mystery; Noah misses his mustache; and Zac was once a cheater, which could be a potential dealbreaker in Tayshia’s eyes.

SEE ‘The Bachelorette’ episode 7 recap: Tayshia bonds with Ivan over race and fires back at the guys

At the after-party, Tayshia was on the search for answers. “Cheating does not sit well with me and that’s nothing I will tolerate,” she told Zac. “Loyalty is such a big deal to me and I literally cannot invest in someone again and have that happen. I will not date a cheater.” Zac admitted he cheated on his first girlfriend but he also humorously revealed it happened in the sixth grade. Zac then proceeded to tell Tayshia he’s falling in love with her and she told him she felt the same. Riley particularly revealed he changed his name due to deep-rooted family issues. “For me, trust is everything,” she said. “I can’t get families involved if I don’t trust the men.” At the end of the night, she opted not to give a rose because she simply needed more time to determine where things stood with everyone.

When Tayshia returned to her suite, she was startlingly met at the door by Bennett. He again apologized for questioning her integrity and went further by saying he loved her and hoped perhaps he could return to the competition. She admitted she was speechless and confused about the situation and would give him an answer the next day.

Next week, the drama intensifies as back-to-back episodes Monday and Tuesday are likely to produce major bombshells and tears. Will Bennett stay? Will Noah go? And get ready for “The Men to Tell All” too. Buckle up!