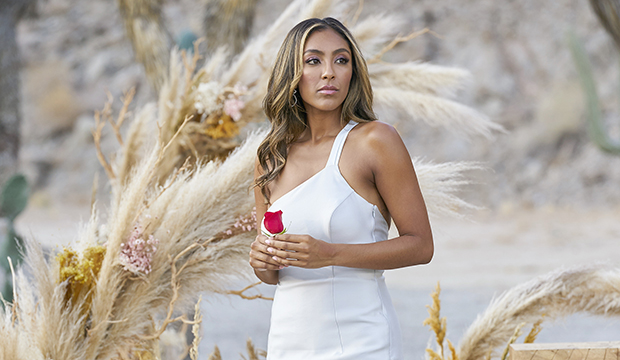 Fantasy suites provided the emotional, romantic foundation for Part 1 of “The Bachelorette” season finale, which initially found Tayshia Adams excited yet stressed about what would transpire as her relationships with Brendan, Ivan and Zac grew more intimate.

“Fantasy suites are so important for seeing how you connect with someone — just being you two whether it be communication but also intimacy,” she said. “As much as I think I’m doing the right things and taking the right steps and confident in my decisions, it’s just a lot to think about. Thankfully, I couldn’t have three better guys. These guys are good guys. They have good hearts. They’re honest, loyal, sweet, respectable, and kind, all the things you would want in a future husband. And that time alone is so crucial. Engagement is right around the corner and I just want to go into it extremely confident.”

In order to calm her nerves and provide extra clarity, JoJo Fletcher returned to give Tayshia some much-needed advice. After asking Tayshia if she felt she could fall in love with more than one guy, she basically told her to follow her heart. “You can fight feelings all day, but it’s going to happen how it’s going to happen,” she said. “And with overnights, it gets harder. It totally took all my relationships to the next level.” JoJo specifically reminded her that fantasy suite conversations can effectively lead to important future discussions about jobs, relocation, family, and kids. “When you’re in those moments of fantasy suites and what that means, you will feel something that will be a sign for you. But it is so rewarding when you get to the end and you are so clear about who you’re supposed to be with. And it’s such a good feeling and I know you’re going to feel that.”

SEE ‘The Bachelorette’ episode 11 recap: One guy ‘f—ing blew it’ when hometown dates came to Tayshia

Ivan received the first overnight date, during which they were asked to participate in the world’s longest, coldest kiss. Chris Harrison reminded them the current world record stood at 5 minutes and 16 seconds. After a few moments of uncomfortableness in their respective ice baths, Tayshia noticed she and Ivan began to breathe in sync, which provided a great sense of calm and warmth to get through the challenge. The final count: 6 minutes and 35 seconds. A new world record!

That evening, celebration was in the air but also an authentic acknowledgement that both felt they could count on the other to accomplish anything life throws at them. Tayshia noted how Ivan was a “rock,” someone she could have fun with while also being vulnerable. Ivan admitted he was “undoubtedly” falling in love with Tayshia and apologized for not telling her sooner and glossing over that fact. She rewarded his breakthrough by extending an invite to the fantasy suite, which consisted of a trailer. “Ivan is the perfect guy,” she said. “He’s genuine, sincere, honest, kind, driven, ambitious. He’s everything.”

Zac was up next. After a fun body-painting exercise during the day, he and Tayshia took the evening to dive deeper. Tayshia questioned why he told his mother he didn’t want kids but said to her he didn’t mind if they had five kids. “[Saying] I didn’t want to have kids and that I just wanted to be single was the easy thing to say because love is hard,” he said. “I do want to be a dad and I do want to have kids. I know I’ll be a good dad and a good husband.” He also told Tayshia he loved her. “What feels the best is the sincerity behind him saying ‘I love you,’” she said. “The way he says it is just so intentional, natural and organic. It’s been amazing.” Interestingly, Tayshia’s overnight with Zac took place inside an actual suite, a far cry from the cramped quarters she shared with Ivan.

Brendan — the first guy Tayshia says she fell in love with, not to mention her first one-on-one — seemed to be visibly overwhelmed and concerned by meeting jeweler Neil Lane, especially as Neil showed Tayshia an assortment of gorgeous diamond rings. “Looking at wedding rings, engagement rings and all these pieces of jewelry that symbolize a future commitment and a future decision that really should mean forever is such a huge step and a scary step for me,” he said. “I’ve been here before, I’ve looked at rings before, but when I propose to someone for the second time that person is going to be my wife for the rest of my life.”

That evening, Tayshia recognized how unexpected the moment with Neil must have been for Brendan, but she wanted to know how he truly felt about their relationship nonetheless. He admitted there had been challenges, and more surprisingly, he needed more time for self-discovery. “I want a wife, kids and family more than anything on the face of this Earth,” he said. “But then coming to the realization there’s a big part of me that’s still broken. There’s a big part of me that still needs time to heal. There’s a big part of me that needs time to grow because I still think there are pieces of myself that I need to pick up. All I want is to give you my whole heart. But as I sit here today, my heart isn’t whole. It really breaks my heart because you deserve a man that is complete. You deserve a man who is healed from his past and unfortunately right now I’m not that man.”

SEE ‘The Bachelorette’ episode 10 recap: Tayshia chooses her final four and (some of) the men tell all

Taking his honesty in stride, Tayshia realized if Brendan wasn’t ready to commit to her, then there was no use trying to convince him otherwise. “I’ve already fought for someone to try and love me once I’m not going to do it again,” she said. The next day, she was visited by Rachel Lindsay, who offered advice, especially about being confident in her decisions.

As Ivan and Zac prepared for the rose ceremony, Chris received a surprise visit from Ben, who felt the need to resolve the breakup. “When things get emotional, confusing, tough, or difficult for me I often shut down,” he said. “But I’ve thought about it a lot and maybe she did feel the same way and she was just concerned that I didn’t feel that way. I think that might be a real possibility.”

Arriving at her suite that evening and catching her off guard, Ben told Tayshia he was in love with her. “I blew it by not telling you in the moment,” he said. “I’ve never felt this feeling, so I was just terrified. But I am in love with you. The life we could have together keeps me awake at night.”

Will Tayshia take Ben back? Or is it too little too late? What about Ivan and Zac? Emotions will run high tonight and anything can happen. Buckle up!