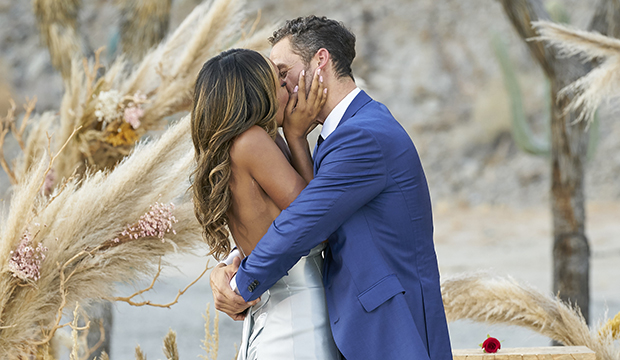 The best installment in “Bachelorette” history concluded with flurry of emotions, drama and a happily engaged couple, which was refreshing given how we got here this season.

The episode began with a shocked Tayshia Adams, preparing for the rose ceremony, attempting to make sense of Ben’s startling return after he was sent home in Episode 11 without telling her he loved her. Ben confessing his love definitely a put a kink into her thought process, especially since she knew he had been too emotionally guarded. “I really care about Ben, but I sent him home for a reason,” she said off-camera to producers.

When she came back to chat with Ben, she wanted answers. “Why didn’t you tell me earlier?” she wondered. Ben, admitting to being scared of the intensity of the moment, blamed his reluctance on being overconfident. “I was so confident that I would get a rose and I’d progress to the next week and have the perfect opportunity to tell you how I felt.” Tayshia acknowledged she missed him but questioned if he would run away again if situations got hard if their relationship progressed. After inviting him to the rose ceremony, he asked her permission for a hug and she agreed. But before he said goodbye, a cordial embrace blossomed into a passionate kiss and an immediate regret. “Ben showing up tonight affects everything,” she said. “And I just don’t want to make a bad decision. And I just kissed him. Why would I kiss him? Why did I do that?”

At the rose ceremony, Ivan and Zac were happy to be the final two — or so they thought; Ben’s surprise appearance drew shocked glances from both. Ben quickly informed them Tayshia invited him to participate in the ceremony and had no idea what would transpire. After explaining how pivotal fantasy suites week was and acknowledging Brendan’s departure was an indication that things just didn’t work out between them, Tayshia, who said she prayed for clarity in navigation her decision, was ready to hand out roses. But first, she asked to speak with Ivan. It seemed as if an off-camera conversation they had about religion, particularly how important it was to Tayshia, was a stumbling block. So she had no choice but to send him home, leaving Ben and Zac as the official final two.

Ben was chosen to meet Tayshia’s family first, which included her father Desmond and mother Rosario. After hearing Ben was originally sent home and just came back, Desmond was skeptical. “For Ben to show up after he was sent home says a little bit about the guy with his character,” he said. “Maybe he didn’t put his best foot forward.” Desmond was pleased with Ben’s background, particularly his West Point pedigree, but he was fearful about Tayshia having to work so hard to get Ben to be on the same page. “To bring somebody else into the picture, they need to be able to come with a lot at this point,” he said.

After speaking with Ben and hearing his perspective on why he failed to open up to Tayshia, Desmond felt better about him and his intentions. “He really acknowledged where he messed up and where could have done better,” he said. “That says a lot for some people. Some people try to gloss over it. I probably went from being doubtful of the guy to where I would give him a chance.” “I was really falling in love with Ben and I kind of put my heart on hold when I sent him home,” Tayshia added. “Today, I started to fall in love with Ben all over again. For Ben to come back here and tell me he loves me — those are the words I wanted to hear. Those are the words I was looking for.”

Zac’s meeting with Tayshia’s family was as fun and easygoing as Ben’s visit, but a key exchange between him and Desmond beautifully illustrated why his maturity serves him well in a competition against Ben. After hearing Desmond speak about not wanting Zac and Tayshia to enter into a relationship that is ultimately a test to see what works, Zac stressed how important it will be to support Tayshia and live up to the expectations of being a husband due to Desmond’s fatherly influence. “You’ve set the [expectations] really high, but I need you to know it doesn’t scare me,” he said. “It actually excites me. But I tell you that because I might have the opportunity to propose to your daughter in the very near future and I take that very seriously. I know what that means. I know what that represents. I’m not going to do that unless I am so sure, which I am right now sitting here in this moment, that it’s the right thing to do. Because I am committed to what that means on the back end.” “I like Zac,” Desmond said. “He’s a good man. Just to see another man love my daughter the way he expressed himself made me be at ease.”

The next day, Desmond stopped by to check on Tayshia. He reiterated his hesitancy about the situation at hand, especially since Tayshia had been previously married. “I don’t want you to get hurt,” he said. “Seeing these guys, we don’t want things to go backwards for you. It might not be what you want to hear, but I don’t want you to make the biggest mistake of your life.” Tayshia respected her father’s advice, recalling how supportive he was when her marriage broke up. She realized she had to truly decide if she wanted to get married again.

Zac’s final date with Tayshia opened with a cloud of fear hanging over them. “I can feel the heaviness,” he said. “I think there’s a feeling of trepidation from her that is concerning. She’s allowed to have moments of doubt, but I want her to know I’m not going anywhere.” After learning a charming wedding dance routine, which found Tayshia visibly stressed and nervous in rehearsal, the chemistry between them seemed to strengthen their relationship.

That evening, Tayshia told Zac her stress was related to future concerns, how things could go wrong and evolve in time when married. “I’m just so used to people running away instead of staying,” she said. Zac reassured her he would be there for her even when situations become crazy or insane. “I’ve never laughed, smiled and had as much fun with someone as I’ve had with you,” he said. “I will do whatever it takes to hold on to that. … My sobriety allows me not to run away and actually face life as it comes my way.”

SEE ‘The Bachelorette’ episode 11 recap: One guy ‘f—ing blew it’ when hometown dates came to Tayshia

The next morning, Tayshia revealed a crucial epiphany: her heart didn’t want Ben. When the time came to break the news, she reminded Ben of how much she appreciated his vulnerability, setting the bar for the other guys. But in the end, her heart belonged to someone else. “I don’t want you to ever second-guess anything,” she said. “Giving you that rose the other night was because I truly wanted to give us another chance because I saw something. I just feel like we missed out on a little bit of time that was very monumental.” An absolutely stunned Ben told Tayshia he was happy for her nonetheless, but the moment still stung. “I put all of myself into this,” he said. “I thought I was going to be her husband. I’m still in love with her. I don’t know what the f— to do now. I lost a really good thing.”

As Tayshia prepared to greet Zac for the final rose ceremony, she reminded Chris Harrison how excited and truly in love she was. When Zac arrived by her side, he brought their first conversation to mind, specifically how they felt everything in life happens for a reason. “When I came here to the desert, I didn’t know what that reason was but I do today. I came here because I was supposed to meet you, he said. “I came here because I was supposed to fall in love with you. From our first kiss to riding the ferris wheel to meeting each other’s families, nothing has ever felt so right my entire life. You’ve helped me experience a love that I didn’t know existed. You’ve made me smile more than anyone has ever made me smile. I love you Tayshia.”

After telling Zac how much of an impression he made from the start, Tayshia reiterated how uncertain she was of finding true love. “There was one point in my life where I thought I would never get married because of all of the pain and the heartbreak that I had been through. I hit absolute rock bottom. And I know that I told you that I love you. But it’s more than that,” she said. “It’s this wild, wild love that I have tried to come up with so many reasons to not believe and you have truly made me believe there doesn’t need to be flaws. And that I deserve a love with a man that won’t run away. And I’m truly looking at my heart. And yes, it is real. And I feel it too. … I love you, Zac Clark.”

After Zac’s romantic proposal, the couple walked off in a cute makeshift cab, a sign of their forthcoming new life together in the Big Apple.

There was no “After the Final Rose” for the first time since the after-show started, due to COVID-19 and production delays, but Tayshia and Zac are still engaged. It’s just as well there was no “ATFR” after how much post-production drama there’s been in recent years between the final couples. And now we’ve got “The Bachelor” is coming in less than two weeks.