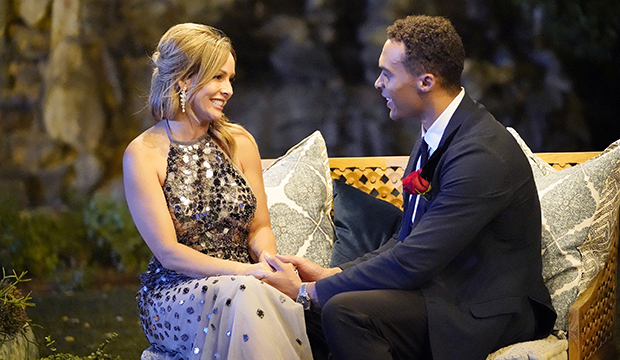 Let the drama begin! The Season 16 premiere of “The Bachelorette” ushered in Clare Crawley’s journey of love with 31 handsome suitors vying for her heart and her attention in spite of the unprecedented backdrop of a global pandemic.

In his introduction, host Chris Harrison was quick to point out the extraordinary times facing Clare and the franchise. It took “patience, work and testing,” he said. He then took us back to pre-pandemic February when Clare, at home with her dogs in Sacramento, found out she would become the new Bachelorette. Giddy with excitement and embracing her truth as a 39-year-old woman searching for her soul mate, she was excited for the possibilities in store. Having been runner-up in 2014 during Juan Pablo Galavis’ season of “The Bachelor” and appearing with disappointing results on the first and second seasons of “Bachelor in Paradise,” she was ready to step into the spotlight again on her own terms. “This is my time,” she said. “I want a man who will be open and emotional and not put up walls. This time I’m going to follow my gut. Nothing is going to stop me from trying to find my husband. I’m so ready for love. Bring it on!”

Well, not so fast Clare. Fast-forward to April, Clare is seen sheltering at home. The pandemic has taken its toll. Days have become confusing and endless. In fact, she shares the relatable difficulty of visiting her mother suffering with dementia and Alzheimer’s while living in a care facility. In June, Chris calls to inform her the season will officially begin filming in mere days at the La Quinta Resort & Club in Palm Springs, California. More good news: Her final COVID test came back negative. She’s good to go! Bring on the men!

The contestants are finally introduced, another eclectic group of personalities and professions from coast to coast, as well as a few Canadians. When they arrived at the resort, genuine anticipation was soon met with agony and frustration due to the multiple COVID tests they had to undergo. Still, there was rejoicing when everyone was ultimately cleared. Some were even ready to give a hug.

Back to Clare. At the arrival ceremony, she looked radiant in a stunning gray and black gown. Before she met her suitors, Chris pulled her aside for one last interview to assess her feelings. It was obvious she had been waiting for this moment for a long time. She was absolutely ready to connect, to simply hug somebody especially “a smokin’ hot man!” She added: “I want a man that is here for me — just as excited about finding their future partner as I am. I’m looking for somebody with depth. I will challenge these men. I can do hard conversations. That’s my wheelhouse. So, they better bring it.” Soon, her thoughts turned more contemplative and emotional as she remembered her late father, whom she says was “an example of what a man should be.” His legacy motivated her to simply keep going, to “show up” no matter how her journey is judged. “Just by showing up it shows I still want it and I still deserve it regardless if I’m 39.”

The men arrive. Standouts include:

– Jason, 31, a former NFL lineman from Arlington, Virginia, who offered a playful homage to Clare’s pregnancy arrival six years ago

– Mike, 38, a digital media advisor from Calgary, Alberta, Canada, who brought Clare a pair of sandals

– Tyler C., 27, a lawyer from Morgantown, W.V., who arrived in a station wagon a la Clark Griswold in “National Lampoon’s Vacation”

– Bennett, 36, a wealth management consultant from New York City who arrived in the style of James Bond complete with a dapper scarf and Rolls-Royce

– Eazy, 29, a sports marketing agent from Newport Beach, California, who barreled through a “Your Future Husband” sign

– Jay, 29, a fitness director from Fort Lauderdale, Florida, who arrived in a straightjacket

– Chasen, 31, an IT account executive from San Diego, California, clad in a medieval knight outfit

– Ed, 36, a healthcare salesman from Miami who arrived in a plastic bubble

– Demar, 26, a spin cycling instructor from Scottsdale, Arizona, who arrived with parachute in tow

– Yosef, 30, a medical device salesman from Daphne, Alabama, who brought Clare a plate of moonpies

– Brandon, 28, a real estate agent from Cleveland who was the only guy who kissed Clare on the cheek (which she enjoyed)

Then there’s 31-year-old Dale, a former NFL wide receiver from Brandon, S.D. The world seemed to stop when Clare met Dale. He truly took her breath away. Sparks flew so much she admitted “I definitely feel like I just met my husband.” When Chris approached her to make sure he heard correctly, she said “I felt everything that I haven’t felt ever. Every other guy I felt confident with but with Dale everything else went dark around me. … I know what I want. I’m 39.”

Inside the cocktail party, the guys were on a mission to get to know Clare but not everyone had valuable alone time. This is usually the case during every season premiere but it seemed more noticeable and off-kilter here. Even so, connections were indeed made. Clare had good vibes with Eazy, especially sharing thoughts on how she hoped to make her mother happy by finding someone special. “I’m tired of braving this world alone and having to be strong all the damn time.” Soon after, she opened up to Dale, who told her it was difficult to be in touch with his sister during quarantine who had underlying health issues. The energy between them was palpable and a real honest connection was taking shape.

As the evening progressed, Tyler C. revealed he knew Yosef by way of a friend who told him she had received a flirty Instagram message from him prior to filming. Surprised by Tyler C. (whom he dubbed “Mini McConaughey”), Yosef approached Clare, who in turn asked to see Tyler C. After she brought them together, Yosef attempted to squash the situation saying there was nothing to hide. Clare said the squabble wasn’t going to interfere with getting to know the rest of the guys and quickly moved on. It could have been an uglier situation but it didn’t spiral out of control. When Clare joined the guys, she had a heartfelt moment with 29-year-old Blake Moynes, a wildlife manager from Hamilton, Ontario, Canada. During quarantine, Blake reached out to Clare, which was against the rules, but she thanked him anyway for his thoughtfulness. She admired him for taking a risk and being there for her during a rough patch. However, ultimately and unsurprisingly, Dale received the first impression rose.

At the rose ceremony, tensions were high. Would the Instagram fiasco cause Tyler C. and Yosef to be cut? What about the majority of guys who lacked adequate alone time? In the end, the following men received roses: Blake Moynes, Eazy, Ben, Riley, Zach J., Tyler S., Joe, Jason, Demar, Chasen, Jordan C., Blake Monar, Kenny, Brendan, Garin, Ed, Bennett, Zac C., Jay, Brandon, Ivan and Yosef. Tyler C.’s good intentions backfired, but I still wonder why Clare didn’t give him a second look. After all, Yosef seemed to be the one hiding something. Well, I’m just glad we’ll finally get to see Jay out of his straightjacket next week.

Over the course of the season, expect Clare to go all in for Dale but something huge erupts within the resort along the way. Gee, wonder what it could possibly be. All hell breaks loose when Clare is called out for being the oldest Bachelorette, and at one point, Chris tells Clare she just “blew up ‘The Bachelorette.’” Oh my! Buckle up!