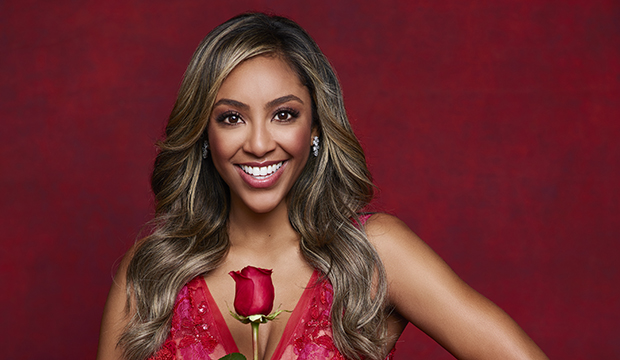 As “The Bachelorette’s” new tagline goes, “the rumors end now.” Three months after the news initially broke, Tayshia Adams replaced Clare Crawley as the Bachelorette in Thursday’s special episode after the latter departed the show with her new fiancé Dale Moss. It was the first time in franchise history that the lead has changed, but producers knew they wanted Adams to step in.

Adams was in consideration to star in Season 16 before producers tapped Crawley in early March. After Crawley, who only had eyes for Moss the second he stepped out of the limo, refused to give out a rose on a group date in the third episode, TPTB knew things might have to change.

“At that point, the producers started discussing like, ‘What would happen if she wants to leave with Dale?’ And that’s when the producers thought that maybe we should reach out to Tayshia,” Rob Mills, ABC’s head of alternative programming, told our sister site “Variety.” “We had met with her earlier [in consideration for “The Bachelorette”], and told her that this time, it’s going to be Clare, so since this was so unexpected, she came in and basically said, ‘You never know when things are going to shake up in your life.’ And we are so lucky that we ended up getting two all-time Bachelorettes.”

SEE ‘The Bachelorette’ episode 4 recap: Clare blows up the show and gets the man of her dreams

After Crawley and Moss walked off into the sunset, Adams made her debut in the final minutes of Thursday’s episode. Mills said producers weren’t concerned about the 30-year-old inheriting Crawley’s leftover guys, for lack of a better term.

“I don’t think they’re as different as you might think on the surface. Tayshia had been through a divorce, so I think there is a lot of maturity that comes with that, and she is super serious about settling down, just like Clare was, so it actually did not seem like a huge stretch for these guys,” he said. “Also, you have to remember that we cast a lot of guys that weren’t necessarily announced for Clare because she was announced as the Bachelorette so late, so some of these guys would have been there for someone else that was chosen as the lead, anyway. It all ended up working out incredibly well, even though it provided some hurdles at first.”

According to Mills, Adams and the men were open and excited about the unprecedented development. It also helped that Crawley was up-front with the men, who were starting to resent her and Moss, about what was happening.

“Clare went and told the guys herself because that was only fair. She had to tell them that she was leaving because it wouldn’t be fair to them if she’s only there for one guy. So, after that, they were so excited,” Mills shared. “They were in these close quarters, and even though it’s a beautiful resort, they’re in the same place for weeks on end and it was so hot outside, so then to have this amazing woman in Tayshia come in, everyone was just overjoyed.”

Unlike Crawley, Adams will not find The One in only four episodes, but her journey will be just as “emotional,” Mills teased. “Tayshia really allowed herself to fall in love with multiple guys. It’s always such a roller coaster. At the end, there are a lot of heartbreaking, devastating moments. There’s not really a villain. It’s more like, ‘I want her to end up with him. Wait no, I want her to be with this guy!'”

“The Bachelorette,” now starring Adams, returns to its regular timeslot on Tuesday at 8/7c.