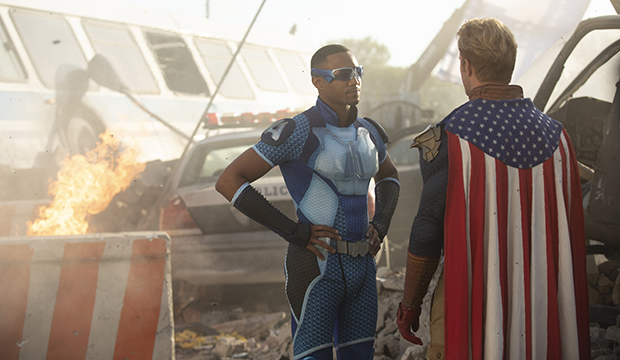 Amazon Prime’s blockbuster action satire “The Boys” could very well crash the Golden Globes this season. While the Hollywood Foreign Press Association runs a little hot and cold when it comes to the superhero genre, “The Boys” might break through if enough voters recognize it as one of the TV hits of the fall.

Based on the comic book of the same name, “The Boys” depicts a world in which real-life superheroes are revered as celebrity gods. Developed by writer/director Eric Kripke, the action drama explores what happens when these heroes go rogue and abuse their powers. It’s become a buzz-worthy cautionary tale about celebrity worship, materialism, fame and greed. Despite praise from critics for the show’s first season (it scored a fresh rating of 84 percent on Rotten Tomatoes), the show flew under the radar last year. However, after its sophomore season premiered in September, it became the streaming giant’s most popular series and the first non-Netflix series to debut on Nielsen’s weekly list of top streaming titles (it entered the chart at No. 3). It also attracted rave reviews and an impressive fresh rating of 97 percent at Rotten Tomatoes. Not to mention, it’s one of President Barack Obama‘s favorite shows of the year.

“The Boys” is currently hovering just outside the top 10 in the Best Drama Series race, according to our combined odds. It is the top-ranked Amazon series in the crowded field, so it stands a very good chance of a surprise nomination if voters want to show the streaming giant some love here. Remember that the Globes love streaming shows. Over the last two years in the drama series category, two out of five nominated shows each year were from a streaming platform (Netflix’s “The Crown” and AppleTV+’s “The Morning Show” earlier this year, and Netflix’s “Bodyguard” and Amazon’s “Homecoming” last year). Three cycles ago, Hulu’s “The Handmaid’s Tale” won, while Netflix’s “The Crown” and “Stranger Things” were also nominated.

On the comedy side, Amazon won the comedy series category two years in a row with “Transparent” (2015) and “Mozart in the Jungle” (2016), and has since pocketed wins for “The Marvelous Mrs Maisel” (2018) and “Fleabag” earlier this year, while Netflix won for “The Kominsky Method” (2019) in between. Other recent nominated comedies include Netflix’s “Master of None,” “Orange Is the New Black” and “The Politician,” and Hulu’s “Casual.”

Three of the show’s actors are also sitting pretty in our Best Drama Actor odds: Antony Starr is currently in 11th place with 89/1 odds, while Karl Urban and Jack Quaid aren’t far behind, in 19th and 23rd place, respectively. We might even see actresses Aya Cash, Erin Moriarty or Karen Fukuhara make a surprise showing if the voters double down on their love for the show.

SEE ‘The Boys” Aya Cash: ‘The bad guys get to do the real fun stuff’ [EXCLUSIVE VIDEO INTERVIEW]

Working against the show is that live-action superhero movies seem to do better with the HFPA than their TV superhero counterparts. “Deadpool” (2016), a film that shares a similar tone and style to “The Boys,” scored two nominations for Best Comedy/Musical Film and Best Comedy/Musical Actor for star Ryan Reynolds. It was one of the first (if not the first) bonafide “superhero” movie to score a nomination in either of the two main best film categories. Marvel’s “Black Panther” (2018) followed suit two years later when it scored in the Best Drama Film category along with nominations for its score and song, “All the Stars.”

Last year, “Joker” (2019) reaped an impressive four nominations, including for Best Drama Film and Todd Phillips for Best Director, while Joaquin Phoenix won Best Drama Actor and Hildur Guðnadóttir won Best Score. And there have been a number of other performers recognized for their work in superhero films, like Jack Nicholson in “Batman” (1989) and posthumous winner Heath Ledger in “The Dark Knight” (2008).

On the TV side, while “Watchmen” broke the superhero barrier at the Emmys with its whopping 11 wins in September, the acclaimed HBO limited series was ignored by the HFPA. In recent years, superhero shows like “Gotham,” “Arrow,” “The Umbrella Academy,” “Legion,” “Daredevil,” “Jessica Jones” and “Luke Cage” have also gone unnoticed by the HFPA. Every once in a while, over the last two decades, a performance does break through in the acting categories, like Sarah Michelle Gellar, nominated in 2001 for “Buffy The Vampire Slayer,” Jessica Alba, nominated in 2001 for “Dark Angel,” and Masi Oka, nominated in 2007 for “Heroes.”

That is not to say the foreign press hasn’t generally shown lots of love to sci-fi, fantasy and horror series over recent years (see: multiple nominees “True Blood,” “Dexter,” “Westworld,” “The Walking Dead,” “Outlander” and “Game of Thrones”), but superhero shows have to date not made a significant impact in the series races since NBC’s “Heroes” made the cut as a Best Drama Series nominee in 2007.