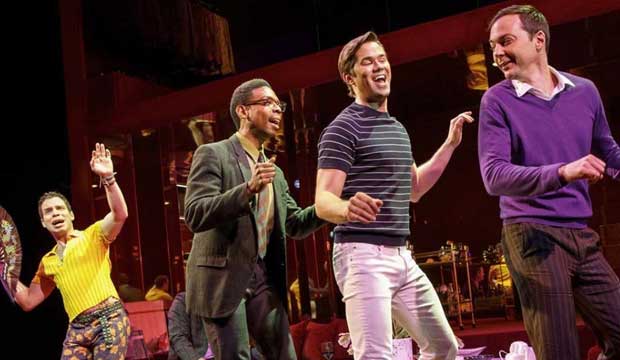 After a successful run on Broadway, producer Ryan Murphy is hoping the film adaptation of his Tony winning hit “The Boys in the Band” can score at the Oscars. The film, which debuted to critical acclaim on September 30, could be a major contender in Netflix’s stack of heavy hitting movies.

The film is adapted from the late Mart Crowley’s seminal gay play of the same name. The drama was a game changer when it debuted Off-Broadway in 1968. The story revolves around a group of gay men who gather together for a friend’s birthday celebration in New York City. As the group drinks the night away, the conversation turns to a “game” where each guest must call someone they love.

As of this writing, the movie has an 86% fresh score on Rotten Tomatoes. Should that critical consensus hold, “The Boys in the Band” could be a formidable player in Netflix’s Oscar season arsenal. Murphy will surely be crossing his fingers for a Best Picture bid. After a Tony win for “Boys,” six Emmys wins, and two Grammy nominations, this would be his first time competing for an Academy Award.

Murphy produced the 2018 revival of the play on Broadway for its 50th anniversary, with Joe Mantello directing. It won the Tony for Best Revival of a Play. The cast included Jim Parsons, Zachary Quinto, Matt Bomer, Andrew Rannells, Robin de Jesus, Charlie Carver, Brian Hutchinson, Michael Benjamin Washington, and Tuc Watkins. The casting was notable for having an entirely out ensemble. Mantello and the Broadway cast reunited for the film adaptation.

Other than winning the revival race, the production’s only other Tony nomination was for Robin de Jesus as Emory. The actor could well score again for this screen adaptation, with critics like Pete Hammond (Deadline) noting his “fine work” playing a campy, effeminate comic relief character “without ever sailing over the top.”

Critics are also singling out other actors with praise as well, including the film’s lead, Jim Parsons, as Michael. As Ryan Lattanzio (IndieWire) puts it: “The performances are all superb, but this is Parsons’ show.” The critic elaborates that Parsons “deconstructs his Hollywood persona for a character who is part bitchy queen, but mostly wounded animal.” The actor scored his latest Emmy nomination for “Hollywood,” another role where he bucked his “Big Bang Theory” image for more serious fare. Oscar voters may similarly reward the actor for his latest serious transformation.

And Owen Gleiberman (Variety) lauds Quinto’s delivery of Harold’s iconic opening monologue. “Quinto plays Harold by creating his own stoned space of bitchery, caressing every ruthless line as if it were velvet,” writes Gleiberman, “He turns lines like ‘That’s the pot calling the kettle beige’ or ‘Keep telling yourself that as your hair drops out in handfuls’ into luscious layer cakes of irony.” Could Quinto pull off a nomination for the film that eluded him on Broadway?

If anything holds “The Boys in the Band” back from awards success, it could be the period specific setting of the narrative. This is a story about being gay in a pre-Stonewall world. The characters are overflowing with self loathing and low self esteem, which may seem unfamiliar or dated to present day LGBTQ voters. But critics appear to appreciate the lens in which director Mantello filters this story through.

David Rooney (The Hollywood Reporter) says that the narrative “has value even as a highly polished museum piece. It’s good medicine for contemporary queer audiences to witness the poisonous internal effect of living in an environment of hate and intolerance, now resurgent in an America where screeching far-right conservatism is emboldened and on the rise.” Lattanzio’s IndieWire review concurs, noting that “while Crowley’s play doesn’t have to speak to every gay male problem anymore, Michael speaks for all gay men in this final meltdown, who have at one point or another, had a brush with (or permanent residency in) self-hatred.”

The reframing of this important drama could be enough to push Crowley, who adapted his own play with Ned Martel into the Adapted Screenplay race. As we saw with August Wilson’s posthumous nomination for “Fences,” academy voters are happy to reward legendary playwrights when their greatest works finally reach our film screens.