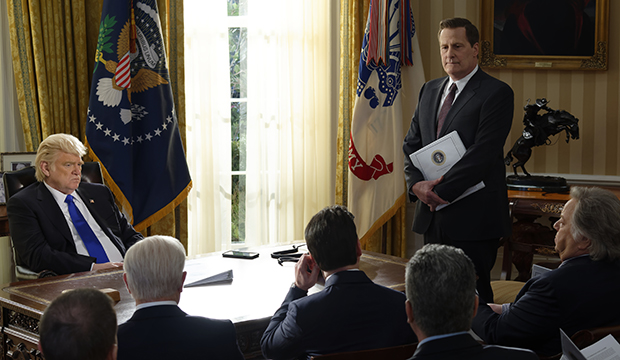 Jeff Daniels and Brendan Gleeson are no strangers to the Golden Globes, drumming up an impressive seven nominations between them. Now both could be on the verge of more recognition from the Hollywood Foreign Press Association for their transformative performancess on the Showtime miniseries “The Comey Rule.” The political drama, based on former FBI director James Comey‘s book, “A Higher Loyalty: Truth, Lies and Leadership,” chronicles Comey’s contentious relationship with President Donald Trump during his first months in the White House.

Gleeson took on the formidable task of playing Trump, a role he managed to pull off in dramatic fashion after countless parodies of the president have been ingrained in the public’s mindset (most notably Alec Baldwin‘s Emmy-winning turn on “Saturday Night Live”). The Irish actor nailed Trump’s mannerisms and speech patterns, all while maintaining a serious tone under that mound of creamy orange hair. Gleeson ranks third in our current Best TV Supporting Actor odds,

Daniels is more reserved yet steady in his portrayal of Comey. The conflicted FBI director deals with various emotions, but the pinnacle comes during that awkward, infamous private dinner with Trump. Daniels steps into the role and delivers with subtlety, embodying Comey’s lack of emotion and stoic demeanor. Daniels currently ranks eighth in our odds to earn a Golden Globe nomination for Best TV Movie/Limited Series Actor.

Gleeson has been nominated for three Golden Globes. His first nomination was for Best Film Comedy/Musical Actor for “In Bruges” (2008). The following year he was nominated in the Best TV Movie/Limited Series Actor category for his performance in “Into the Storm.” He was nominated once more for Best Film Comedy/Musical Actor for “The Guard” (2011). He lost each of those bids to Colin Farrell (“In Bruges”), Kevin Bacon (“Taking Chance”) and Jean Dujardin (“The Artist”), respectively.

Daniels has also been swept in his four prior nominations at the Globes. He lost back-to-back bids at the 1986-87 ceremonies in the Best Film Comedy/Musical Actor category for “The Purple Rose of Cairo” (1985) and “Something Wild” (1986); the Globes ultimately went to Jack Nicholson (“Prizzi’s Honor”) and Paul Hogan (“Crocodile Dundee”). Nearly 20 years later, Daniels was nominated in the same category for “The Squid and the Whale” (2005), losing to Joaquin Phoenix in “Walk the Line.” Daniels’ latest nom was for Best TV Drama Actor for his role in “The Newsroom” at the 2013 ceremony, where he lost to Damian Lewis in “Homeland.”

“The Comey Rule” is also a contender for Best TV Movie/Limited Series, where it is currently within the top 10 in our odds. A Showtime movie or miniseries has been nominated in each of the last two years, with “The Loudest Voice” losing to HBO’s “Chernobyl” last year and “Escape at Dannemora” falling to FX’s “The Assassination of Gianni Versace: American Crime Story” the year prior. Will “The Comey Rule” be Showtime’s next contender at the Globes? 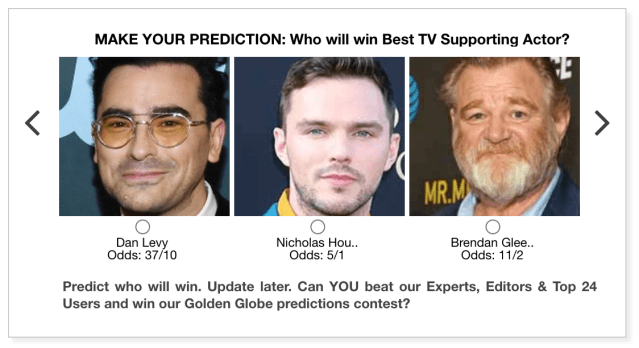