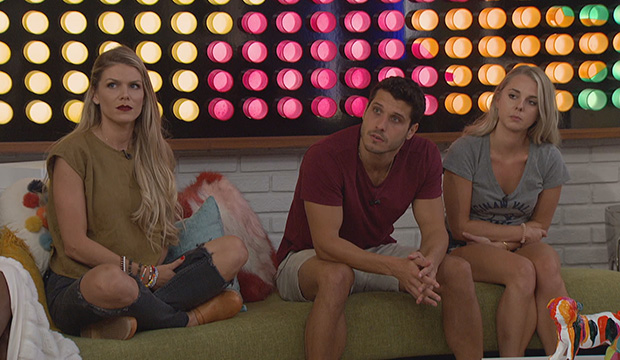 With Cody Calafiore winning his second Head of Household competition this week on “Big Brother 22” and continuing the streak of his alliance strictly nominating players outside their group, we must ask the question: how does The Committee rank against the great alliances in BB history? Cody has been aligned with Christmas Abbott, Nicole Franzel, Memphis Garrett, Tyler Crispen and Dani Briones in a so-far-unbreakable alliance of six since Memphis corralled the group during his own HOH reign in week 2. As of this week, they have won 7/8 HOH and 5/8 Power of Veto comps.

Of the six, only Tyler has sat on the nomination block, but that was in one of the alliance’s toughest weeks. Dani had to nominate two replacements after David Alexander used his Disruptor power to remove himself from the block and then Da’Vonne Rogers defied her by saving Kevin Campbell with the POV. The week ended with one of Dani’s side-allies and Nicole’s “best friend in the house,” Ian Terry, going home. The two women had the option of saving Ian in a split vote, but that would have required voting our Committee member Tyler instead. They stuck with the alliance and framed David for the near-split vote, severing David, Kevin and Da’Vonne’s in-game relationship.

David, Da’Vonne and Kevin have long been the pawns and targets of The Committee for weeks. Kevin currently sits on the block for the fifth time and is Cody’s target-apparent while David was named three times and Da’Vonne twice as nominees. Da’Vonne was evicted last week with only Dani and Nicole voting to keep her (and then lying about it to each other), and while David may have found some breathing room for now he will likely see the nomination chairs again during Thursday’s historic triple eviction.

Adding to The Committee’s seven HOH wins and five POV wins, the group also won three other comps: Christmas won the week 2 Safety Suite comp and she and Dani both won a power in the week 5 BB Basement comp. That is a combined  15 competition wins for the alliance and there are still more than four more weeks of comps to go.

With so many wins and proving that their bond is strong enough that no one has turned on each other yet — how do they stack up against the most powerful alliances the preceded them? Below is a list of those former alliances and a brief summary of their own strength. After the list is a poll where you can vote: What is the strongest alliance in Big Brother history?

The Brigade – season 12
(Hayden Moss, Enzo Palumbo, Lane Elenburg, Matt Hoffman)
If it wasn’t for Britney’s week 7 reign as HOH that sent a seemingly duplicitous Matt home, The Brigade might have finished as the final four instead of the final three. In fact, their strength was in the formation of side-alliances, especially with Britney who finished fourth, that helped them control every eviction throughout the season and amass a total of seven HOH reigns.

SEE‘Big Brother 22’ spoilers: Welp, the houseguests were warned about the triple eviction because we cannot have nice things

The Quack Pack – season 14
(Ian Terry, Dan Gheesling, Britney Haynes, Danielle Murphee, Shane Meaney)
With a combined 18 competition wins, The Quack Pack dominated play during pivotal weeks in the middle of the season. It wasn’t until a chaotic week 7 that their first member was evicted when Britney was named as the replacement nominee for Dan following his epic “funeral.” But that didn’t stop the other four from finishing at the top of the season.

The Detonators – season 16
(Derrick Levasseur, Cody Calafiore, Christine Brecht, Zach Rance, Frankie Grande)
This group proved to be the solid core of the larger season alliance, Bomb Squad, that outlasted most of the rest of the house and was instrumental in Derrick’s seemingly breezy journey to finale night. While the group was one of the most volatile alliances we’ve ever seen, they held remarkably tight with four of them in the final six. Derrick and Cody remain one of the strongest duos ever as The Hitmen, ranking up there with Dr. Will Kirby and Mike Boogie‘s legendary Chilltown bromance and the Dan and Memphis duo The Renegades.

Level Six – season 20
(Kaycee Clark, Tyler Crispen, Angela Rummans, Brett Robinson, Rachel Swindler, Winston Hines)
Unlike most of the alliances on this list, Level Six formed in the very first week of the season and remained in tact through to the end with Kaycee and Tyler sitting as the final two. Perhaps their biggest test was in that same week when they were still a minority alliance, but Tyler was able to get Kaitlyn Herman to flip on her FOUTTE alliance and vote with them to save their future side-ally, Sam Bledsoe. While Rachel and Winston did leave the game early, that the remaining four were able to make the final six alongside Sam and JC Mounduix, another side-ally, is a testament to their loyalty and adaptability given some impactful comp losses.