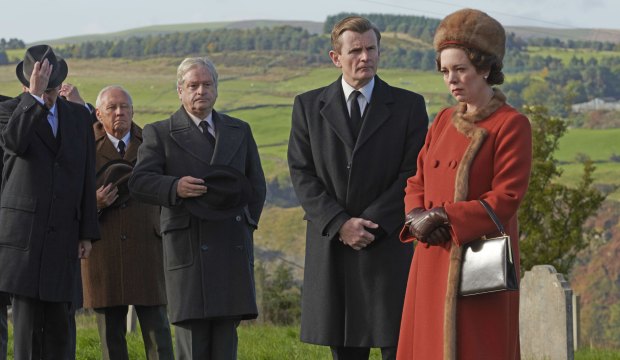 “The Crown” won eight Emmys out of 26 nominations over the course of its first two seasons, and it’s a two-time contender for Best Drama Series, but in a way season three wipes the slate clean. Inspired by the life and reign of the UK’s Queen Elizabeth II, the Netflix drama replaced its core cast as their characters aged into a new stage of their lives. Will this new era resonate with voters as much as the last one did? Scroll down to see the show’s 27 entries on this year’s ballots ranging from Best Drama to Best Special Visual Effects.

Claire Foy played Elizabeth in seasons one and two, winning Best Drama Actress in 2018. Stepping in to fill her shoes this year is Olivia Colman, and this isn’t her first time as an awards contender for playing a British queen. She won an Oscar for Best Actress as Queen Anne in the offbeat comedy “The Favourite,” and she won a Golden Globe for “The Crown” earlier this year. She’s one of 10 actors on this year’s ballot for the show, including Oscar nominee Helena Bonham Carter as Princess Margaret, BAFTA nominee Josh O’Connor as Prince Charles and Emmy nominee Charles Dance as Lord Mountbatten.

The series is an expensive, ambitious undertaking, which always makes it a force to be reckoned with in craft categories. And the show is betting big on the episode “Aberfan” in those Creative Arts races. “Aberfan” recreated the horrific collapse of a colliery spoil tip in the title Welsh village in 1966, which killed 144 people, more than 100 of whom were children. That emotionally and technically demanding episode has been entered for consideration for its writing, directing, cinematography, music composition, picture editing, production design, sound editing, sound mixing and visual effects.

That’s nine categories for that one episode alone, and it should be noted that the all-time record for the most honored single episode of all time is six. The “Boardwalk Empire” pilot and the “Game of Thrones” episode “Battle of the Bastards” currently share that distinction, and “Aberfan” has the potential to eclipse that total. Of course, before it can win that many awards, it has to be nominated. How many of the below submissions do you think will result in noms and wins?