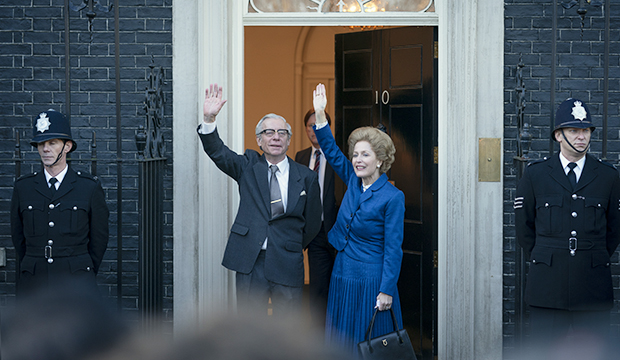 For a bunch of reasons and because of these these strange times we live in, only one reigning Screen Actors Guild Award TV champ can defend its (no pun intended) crown this season: “The Crown.” The royal drama is the odds-on favorite to take home a second straight statuette for drama ensemble, and history is definitely in its favor.

“The Crown,” whose fourth season dropped Sunday, would be the ninth series to win the award more than once and the seventh to win all of them in a row. Not counting “The Crown,” only six shows — “NYPD Blue,” “CSI,” “Lost,” “Grey’s Anatomy,” “Breaking Bad” and “Stranger Things” — have won drama ensemble once in the awards’ 26-year history, so they love a good rubber-stamping here.

The two shows that didn’t have uninterrupted victories are “The Sopranos,” which has the longest gap between its twin wins at eight years apart in 2000 and ’08 — for its first season and final season — and “Downton Abbey,” which won in 2013, lost to “Breaking Bad” the following year and then won again the next two years.

The great news for “The Crown” is that all of its rivals from last year are out of the running — “Game of Thrones” is over, as is “Big Little Lies” (for now), while “The Handmaid’s Tale” and former champ “Stranger Things” haven’t completed their new seasons yet due to COVID-19. SAG-AFTRA voters are creatures of habit, and this makes it very easy to check off an ol’ favorite. Plus, the anticipated fourth season features new cast members Gillian Anderson — a former two-time individual SAG Award champ for “The X-Files” — as Margaret Thatcher and Emma Corrin as Princess Diana. Anderson is predicted to earn a drama actress nomination alongside Olivia Colman and Helena Bonham Carter, who were nominated last year.

If a new show doesn’t make the cut, “The Crown” could find itself facing some familiar names and past nominees. “Ozark,” which won a trophy for Jason Bateman in 2019, is in second in our odds — and let’s not forget that the SAG Awards has very much been here for “Ozark” from the start. “This Is Us,” which was dropped last year, is favored to return, sitting in third place. (Of note: “This Is Us” has never lost this category because it was snubbed its first year, which was when “Stranger Things” won, and it has gone 2 for 2 since.) “Better Call Saul” is in fourth and would net just its second bid in the category. “Killing Eve” rounds out the top five, and while it’s never been up for ensemble before, its leading ladies Sandra Oh and Jodie Comer have been nominated, with the former winning. 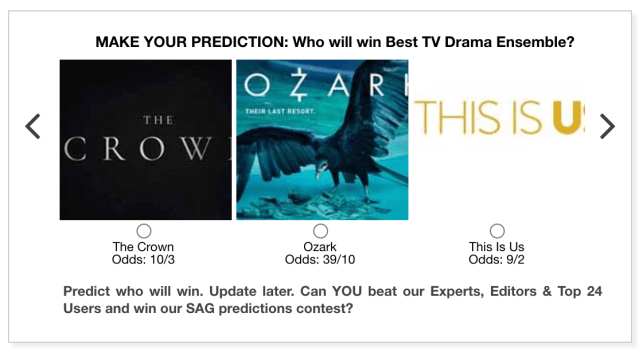