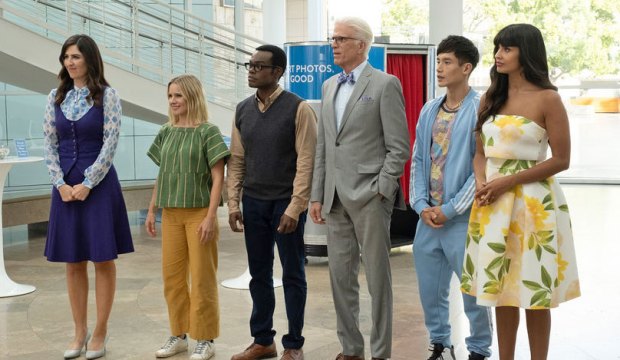 Over its four seasons, “The Good Place” steadily became one of the most celebrated, meme-able comedies on television, and notably, one of the last remaining broadcast network comedies to earn acclaim from critics, TV audiences and awards bodies alike. The high-concept sitcom set almost entirely in the afterlife earned praise from early on for its whip-smart writing that blends irreverent comedy with science-fiction, fantasy and philosophy. It also boasted an accomplished cast led by Ted Danson and Kristen Bell, with D’Arcy Carden, William Jackson Harper, Jameela Jamil and Manny Jacinto making names for themselves in the supporting cast. With the final season having just ended earlier this year, will Emmy voters see fit to coronate “The Good Place” for its farewell like they did with “Fleabag,” last year’s cool show of the moment?

“The Good Place” is now in a good position to add to its nominations total significantly, especially with Emmy favorites like “Fleabag,” “Veep,” “Barry” and “Russian Doll” out of the way, either because they’ve ended for good or just won’t have any episodes aired during this eligibility period. That leaves many open slots, so “The Good Place” should at least be safe for another nomination in Best Comedy Series, as well as for Danson and Rudolph, with the possibility of another cast member or two scoring their first noms.

But could “The Good Place” actually run away with a win? If we use “Fleabag’s” big windfall last year as a comparison, there are parallels for the NBC series. It captures a similar spirit as “Fleabag” and is traditionally funny, especially in comparison to the dark dramedies that are beginning to populate the comedy categories at the Emmys. Voters tend to prefer knee-slappers to darker shows; even the dramedies that have won the top prize like “Ally McBeal” and “The Marvelous Mrs. Maisel” have boasted broad belly laughs. “The Good Place” also has that cool factor and speaks to grander concepts in our society. And both shows have a goofy comedy style that gives way to unexpected sweet moments, which was certainly true of the final moments of “The Good Place” finale.

But did the final season of “The Good Place” hit the zeitgeist as strongly as “Fleabag” did last spring? The wave of buzz for “Fleabag” was almost unprecedented, a word-of-mouth phenomenon rarely seen for a show in its second season. A primary reason for “Fleabag’s” success was the appeal of multi-hyphenate Phoebe Waller-Bridge, the show’s star-writer-creator. Auteur-driven shows with a singular star have won the past two years in Best Comedy Series. Before “Fleabag,” Amy Sherman-Palladino‘s aforementioned “Mrs. Maisel” had a similar sweep in 2018, and while that series has opened up to become more of an ensemble piece in subsequent years, it was very much the Rachel Brosnahan show in its first season.

SEEEmmys 2020: Complete list of every show sadly NOT returning to compete, including ‘Game of Thrones,’ ‘Fleabag,’ ‘Barry’

“The Good Place” is more in line with Best Comedy Series winners of the past like “The Office,” “Modern Family” and “Veep,” all of which featured rich ensembles bouncing off each other, so maybe that’s still a good sign for the show.

The tricky part for “The Good Place” will be getting around “The Marvelous Mrs. Maisel,” now competing for its third season, and “Schitt’s Creek,” which has a lot of buzz as it too concludes its final season. While both are currently higher in our Gold Derby odds for Best Comedy Series as of this writing, it would be foolish to count out “The Good Place” if Emmy voters are looking to reward something new and look cool in the process.