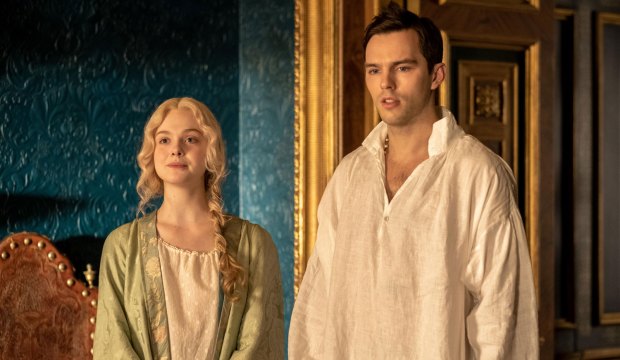 Hulu‘s “The Great” premiered its entire 10-episode season on May 15, 2020, recounting the early years of Russia’s Catherine the Great (played by Elle Fanning) when she married the brutish Peter III (Nicholas Hoult) and plotted to bring revolutionary change to the country. It’s an unconventional take on world history described by the show itself as an “occasionally true story.” Will the Emmys appreciate its comedic skew? Scroll down for our exclusive video interviews with top Emmy contenders from the show.

The series was created by Tony McNamara, who knows a thing or two about the absurdity of monarchs. He was one of the Oscar-nominated co-writers of “The Favourite,” which told a similarly offbeat story of Queen Anne of Great Britain (Olivia Colman) as two women in her life (Emma Stone and Rachel Weisz) vied for her affection in order to gain power. That film earned 10 Oscar nominations including Best Picture, and it won Best Actress for Colman. So the motion picture academy has already favored this brand of regal comedy. Perhaps the TV academy will follow suit.

It wouldn’t be the first time the Emmys have awarded royalty. The limited series “Elizabeth R” (1971) and “Elizabeth I” (2005) both ruled over the Emmys for their depictions of Queen Elizabeth I. And Claire Foy won Best Drama Actress in 2018 for playing Queen Elizabeth II in “The Crown.” “The Great” could additionally benefit from the quality of its production values, which could make the series a contender for its costumes, production design, makeup, hairstyling, music and more. Follow the links below to see what some of the show’s creative team has to say.

SEECatherine could be twice as Great at the Emmys: Nominations for both Elle Fanning and Helen Mirren?