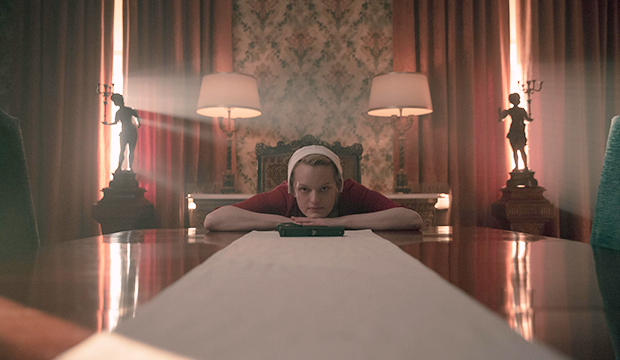 So far, four directors from Hulu’s “The Handmaid’s Tale” have been blessed with Emmy nominations: Kate Dennis (“The Bridge,” 2017), Reed Morano (“Offred,” 2017) — who won — Daina Reid (“Holly,” 2019) and Kari Skogland (“After,” 2018). But Mike Barker, an executive producer who has directed 12 episodes of the series and been submitted for all three of the show’s go-arounds at the Emmys, is still waiting his turn. Will the British director finally get his due this year with “Handmaid’s” third installment?

Five of Barker’s 12 directorial efforts were in this season, of which he will have to pick one to submit for consideration at the Emmys. While his entry is unknown at this point until official nominating ballots are released in a few months, the season closer “Mayday” will probably be — and ought to be — his choice. Why? It serves as a culmination to not only to the third season but the series as a whole thus far, as, after a long and intense buildup, June (Elisabeth Moss) finally sows the seeds of resistance against Gilead by smuggling more than 100 children into Canada with help of Commander Lawrence (Bradley Whitford) and the Martha network.

The hour launches with a harrowing flashback scene to the moments after June is captured, in which we see, among other enormities, women being beaten, some violently rounded up to be examined by doctors and others, like June, being herded into a truck. In conjunction with Stuart Biddlecombe’s cinematography and Adam Taylor’s score, Barker crafts a scene that looks and feels like a horror movie, evoking a verisimilitude of that of footage from a concentration camp. What we witness is nothing else than the birth of Gilead, an atrocity that becomes palpable through an atmosphere of angst, fright and horror that Barker establishes. This derives mostly from the fact that he shoots it from June’s perspective, putting the viewer directly in her and the other women’s shoes, uncomfortably but necessarily so.

The opening sets the tone for the rest of the hour, which is characterized by its nonstop intensity. After all Marthas and children arrive at the Lawrence residence, they make their way through the dark woods to the airport, which is the episode’s most thrilling, anxiety-inducing sequence. Barker utilizes wide shots to uninterruptedly warn of the lingering peril, but balances these out with closeups on handmaids, Marthas and children, immersing us in their situation. There is an energy and flow to this sequence that Barker composes under the umbrella of Bruce Miller’s script and Wendy Hallam Martin’s editorial work, both of which help establish a consistent pace. As dangerous as June’s mission is, the episode is also about the significance of her attempt as well as the hope of her potential success.

There’s a sigh of relief once June watches as the plane takes off, but the episode’s climax is reached when it lands in Canada, where Emily (Alexis Bledel), Luke (O.T. Fagbenle) and Moira (Samira Wiley) are among those who welcome the children and Marthas to freedom. It’s perhaps the most satisfying scene of not only the entire season but series; we’ve seen individual characters like Emily and Moira escape, but never so many, let alone young children who will now not be subject to Gilead’s oppression.

Barker’s work with actors stands out throughout, particularly with Moss. When June tells Commander Lawrence that he is no longer in control, the camera slowly but steadily moves in on Moss, brilliantly illustrating June’s “rise to power.” Even regulars who have just a few minutes of screen time in the episode — most notably, Bledel, Amanda Brugel (who plays Rita), Fagbenle and Wiley — have their moments to shine since Barker captures their raw emotions when their characters welcome the American refugees. Barker also pulls out a beautiful performance from child actor Kate Moyer, whose character Kiki quickly becomes the hour’s emotional centerpiece.

“Handmaid’s” had a solid run at the guild awards earlier this year, holding on to several citations that its first two seasons had scooped up and even reclaimed the American Society of Cinematographers Award for Colin Watkinson. It was dropped by the Directors and Producers Guild Awards, but it was edged out at both by, among others, “Game of Thrones” and “Watchmen,” the former of which competed for its final season at last year’s Emmys and is thus out of the running this year, while the latter contended as a drama series at the guilds but will be a limited series at the Emmys. At DGA, “Thrones” and “Watchmen” occupied two slots each, so Barker’s absence might not be indicative of his Emmy chances. The fifth nominee, “Succession,” is the only one “Handmaid’s” would have to actually face at the upcoming ceremony.

The show has never missed out on a directing nom at the Emmys, even last year when the final three orphaned outings of its second season could only contend in categories that recognized single-episode achievements. But because its eligible third season aired last summer, it can now submit in all races again and currently sits in fifth place in our Best Drama Series odds. The season might not be top of mind come voting, but that didn’t hurt it last year when it was the second most nominated drama series with 11 bids (trailing “Thrones’” 32) despite competing for merely three episodes that had aired an entire year earlier.

So far, Barker has been left out in favor of the show’s female directors, but perhaps his biggest challenge is being invited into the club, as the directors’ branch tends to gravitate toward household names. For instance, “Thrones’” Miguel Sapochnik was left out for his debut season (the fifth) despite directing that season’s most acclaimed outing (“Hardhome”), while past Emmy winner David Nutter and nominee Jeremy Podeswa were shortlisted. The following year, however, Sapochnik was not only nominated for “Battle of the Bastards,” but also ascended the throne for the one-hour spectacle. Sometimes, directors can overcome being a lesser-known quantity if their submission is showy enough, which Barker’s 65-minute “Mayday” most certainly is. Plus, with his past directing credits including “Fargo” (2017), “Broadchurch” (2015) and “Outlander” (2014-16), it’s not like Barker is a complete newbie. He might not have gotten his due on his second try like Sapochnik did, but perhaps the fourth time is the charm.

His other four outings in the third season were the first episode “Night,” the second “Mary and Martha,” the seventh “Under His Eye” and eighth “Unfit.” If he submits anything other than “Mayday,” it would probably be “Night,” given that season openers are often go-to entries. Although it’s smaller in scale than the finale, it’s equally cinematic with such scenes as Serena (Yvonne Strahovski) burning down her and Fred’s (Joseph Fiennes) house. Regardless of which episode Barker submits, he could capitalize on collective goodwill for, as of now, having directed one third of the entire series.