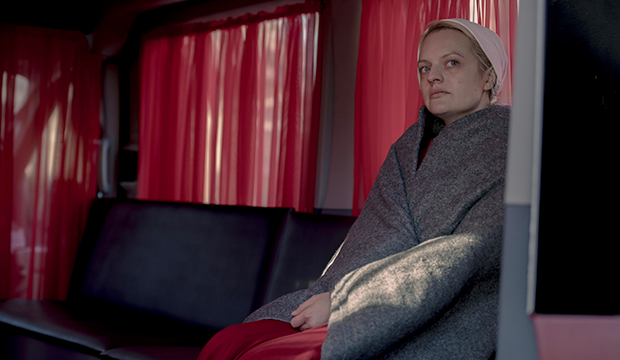 For Hulu’s “The Handmaid’s Tale,” series creator Bruce Miller has collected three consecutive Best Drama Writing Emmy nominations: two individual ones for the pilot “Offred” in 2017 — for which he won — and the Season 2 opener “June” in 2018, and one shared with co-writer Kira Snyder for Season 2’s 11th hour “Holly” in 2019, when the show competed for the final three orphaned episodes of that season. He can extend his streak with the show’s third installment, but will the Emmys embrace him a fourth time?

Miller launched and concluded the season with “Night” and “Mayday” respectively, which are the only two episodes he penned this time around. We won’t know which one he will enter until the nominating ballots are released in a few months, but for now let’s break down his two options:

“Night”
This would fall more in line with Miller’s past submissions, seeing that two of his three have been season premieres, save for last year’s, when he was limited in his choice. With openers, writers have the difficult task of building the bridge between the most recent and current seasons while simultaneously kicking off new storylines and immersing viewers back in after being off air for months or even years.

And “Night” is no exception, since Miller juggles multiple storylines at once, all of which are tied to the aftermath of June’s (Elisabeth Moss) decision to send Emily (Alexis Bledel) and baby Nichole to Canada while staying put in Gilead: June’s brief but unauthorized reunion with her daughter Hannah (Jordana Blake) at the MacKenize household; Emily and Nichole’s successful escape to Canada; the Waterfords reckoning with Serena’s (Yvonne Strahovski) decision to send Nichole away; the burning of their residence at the hands of a grief-stricken Serena; and June’s new posting at the Lawrence household.

It’s a whole lot of developments to balance, but Miller manages to string them together, crafting a tight, well-paced 49-minute episode that sets the action in motion. Per usual, there are great dialogue bits and juicy zingers — most markedly, “Burn, motherf—er, burn!” — which Miller’s peers could eat up, given that language, or better yet, the restriction on language for women, is such an essential part of the show. The episode ends on a pitch-perfect, hopeful note with June’s reassignment to Commander Lawrence (Bradley Whitford) and his wife, both of whom helped orchestrate Emily and Nichole’s escape. On “Handmaid’s,” we’re used to constant gloom and doom — and fittingly so — but Miller foreshadows a payoff to all the misery, which is an important step to uphold its gravity.

“Mayday”
Contrary to “Night,” “Mayday” is centered on just two storylines: June’s attempt to sneak several dozens of children out of Gilead, and the Waterfords’ stay in Canada, where Fred (Joseph Fiennes) finds himself in a detention facility and Serena spending time with Nichole. It’s easy to write off this 65-minute episode as directorial and editorial achievements with its cinematic qualities and grand scale rather than a feat of writing, but the groundwork is laid in Miller’s script, which has to bring the season to a fitting close.

Opening with a scene that flashes back to the moments after June is captured in the pilot, with her in a holding center, seems like a deliberate choice of Miller’s to juxtapose the end of freedom to its re-emergence that follows, as June reigns victorious in her aforementioned mission. A plane with more than 100 Gileadean children landing on Canadian soil seems like an upshot to which not only the season but series as a whole was building. Gilead might still hold firm, but it’s just a matter of time until it’s no longer in stable equilibrium.

The strength of Miller’s finale script crystallizes in how each character’s season arc is wrapped up: At the center is June, who has taken control of the narrative, but, as the episode points out, had to take controversial measures — including holding a Martha at gunpoint — to get there; Serena is detained after Fred informs Mark Tuello (Sam Jaeger) of her crimes, finally placing both in holding; and even smaller characters like Rita (Amanda Brugel), who gets to see the light of day upon arrival in Canada, get their due. Meanwhile, Miller is able introduce Kiki (Kate Moyer) — one of the children who boards the plane — whose one-episode arc is the finale’s emotional core. “This is the place where I can wear what I want?” she innocently asks Moira (Samira Wiley), which is a line of dialogue that encapsulates the season’s theme: breaking free from subjection.

Earlier this year, Miller and his team of writers racked up their third straight Writers Guild of America Award nomination for Best Dramatic Series, but the show missed out in Best Episodic Drama, which recognizes single episodes, after scoring a bid the year before for writer Eric Tuchman for Season 2’s “First Blood.” That said, it was snubbed in that category for the first season as well, which won the Emmy for Miller, who has never depended on this particular recognition for the Emmys.

Last year, “Handmaid’s” was the second most nominated drama series at the Emmys, a true feat considering it contended for three episodes that had aired an entire year earlier. As aforementioned, Miller’s shared nom with Snyder added to the show’s 11 citations, bringing its Emmy nomination total to 44. Fifth in our odds for Best Drama Series, the show looks likely to make another dent in the nominations this year, in which case a fourth writing nom for Miller would seem like a lead-pipe cinch.