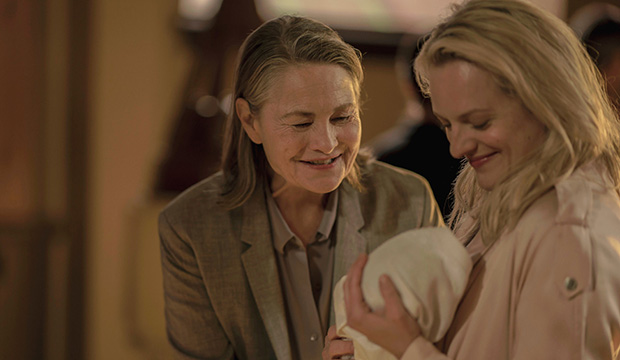 The only other series to come close to matching “The Handmaid’s Tale” and “Law & Order: SVU” in Best Drama Guest Actress is “The Practice.” ABC’s legal drama prevailed for Beah Richards (2000), Alfre Woodard (2003) and Sharon Stone (2004), though again, those three were not all in a row. Do you think “Handmaid’s” will triumph in this category at the upcoming 2020 Emmys? Make your predictions right now.

Jones’ victory in 2019 was notable for the fact that “The Handmaid’s Tale” didn’t actually air a full season within the 2018-19 eligibility period. Instead, Hulu entered three “orphaned episodes” of Season 2 for Emmy contention, which included Jones’ winning performance in “Holly.” That meant Jones received two separate nominations for guest-starring on the second season, losing to Wiley in 2018 but taking the gold the following year.

While we won’t know who’s all in contention for Season 3 of “The Handmaid’s Tale” until the Emmy nomination ballots are unveiled on July 2, Hulu did provide to Gold Derby a list of category submissions (see below). Of course, more names might be added by the studio on the final Emmy ballot. Also note that performers not included on this list may well be submitted by their personal reps.

Alexis Bledel as Emily Malek, a former handmaid who escapes Gilead. Appeared in 5/13 episodes in Season 3: “Night,” “Mary and Martha,” “God Bless the Child,” “Under His Eye” and “Mayday.”

Clea Duvall as Sylvia, Emily’s wife who reconnects after Emily escapes. Appeared in 3/13 episodes in Season 3: “Mary and Martha,” “God Bless the Child” and “Under His Eye.”

Julie Dretzin as Eleanor Lawrence, the unstable wife of Joseph (Bradley Whitford). Appeared in 6/13 episodes in Season 3: “Mary and Martha,” “Unknown Caller,” “Under His Eye,” “Bear Witness,” “Liars” and “Sacrifice.”

Cherry Jones as Holly Maddox, the mother of Offred (Elisabeth Moss) who doesn’t want her granddaughter to be baptized. Appeared in 1/13 episodes in Season 3: “God Bless the Child.”