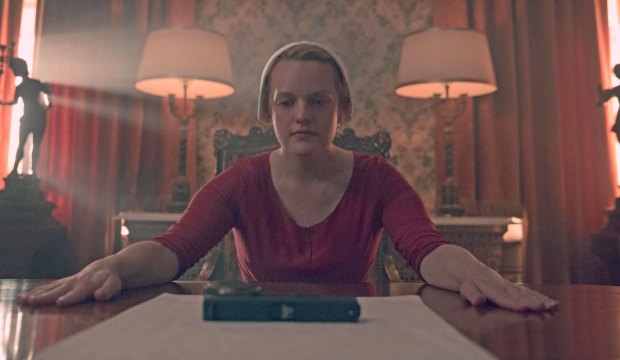 The Hulu dystopian drama “The Handmaid’s Tale” has won 14 Emmys in the last three years including Best Drama Series in 2017. Will it add to its total in 2020? Emmy voting began on July 2, which meant that ballots are available onnline. But you don’t have to be a voting member of the television academy to see them. They’re also available to the public. Scroll down to see 35 “Handmaid’s Tale” entries that academy members will be considering until voting closes on July 13.

The “Handmaid’s” submissions are dominated by actors. Almost half of the show’s total entries (17) are in performance categories, led by Elisabeth Moss in the Best Drama Actress race, which she previously won in 2017. Best Drama Supporting Actress has the most performers from the show to choose from with seven entries including past Emmy winners Ann Dowd and Samira Wiley and past nominee Yvonne Strahovski. Last year’s Best Drama Guest Actress winner Cherry Jones is submitted again in that category, while the reigning Best Drama Guest Actor champ Bradley Whitford has moved up to the supporting race.

Series submit specific episodes in several Emmy categories and the two “Handmaid’s” installments with the most entries are “Household,” the sixth episode of season three in which June (Moss) and the Waterfords (Strahovski and Joseph Fiennes) visit Washington DC, and the season finale “Mayday.” Those episodes could rack up as many as six nominations apiece. So how many do you think the show will receive overall? And how many will it win? Check out the list of submissions by category below.

SEEEmmy spotlight: Back in guest, ‘The Handmaid’s Tale”s Alexis Bledel deserves a bid for her heartbreaking work on Season 3