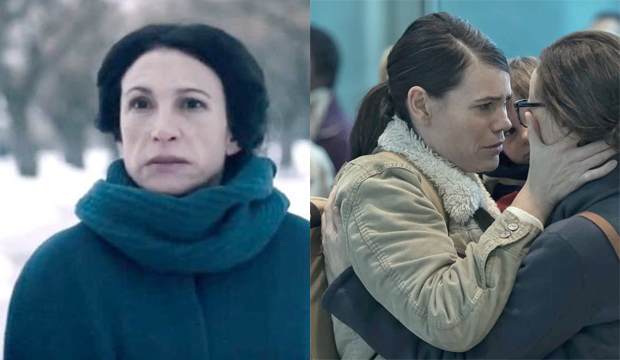 “Praise be” to great guest stars! Amazingly, “The Handmaid’s Tale” has gone three-for-three at the Emmys in Best Drama Guest Actress, winning for Alexis Bledel (2017), Samira Wiley (2018) and Cherry Jones (2019). A fourth triumph would tie Hulu’s post-apocalyptic series with “Law & Order: Special Victims Unit,” which won a record four years in a row for Leslie Caron (2007), Cynthia Nixon (2008), Ellen Burstyn (2009) and Ann-Margret (2010), not counting its first category trophy for Amanda Plummer (2005). Can “Handmaid’s” keep up its wild winning streak this year with standout guest stars Julie Dretzin or Clea Duvall?

Dretzin plays Eleanor Lawrence, the unstable wife of Joseph (Bradley Whitford). She appeared in 6/13 episodes in Season 3 (“Mary and Martha,” “Unknown Caller,” “Under His Eye,” “Bear Witness,” “Liars” and “Sacrifice”), which means she just made the “less than 50%” cutoff required for guest star eligibility. The recognizable character actress has yet to be nominated for a major industry award, despite regularly working in Hollywood for three decades.

Duvall portrays Sylvia, Emily’s (Bledel) wife who reconnects after Emily escapes. She popped up in 3/13 episodes in Season 3 (“Mary and Martha,” “God Bless the Child” and “Under His Eye”), well within the eligibility threshold. The versatile film and TV star has two SAG Awards on her mantel for starring in the ensembles of “Argo” (2012) and “Veep” (2018), as well as various accolades from critics’ groups.

Besides Dretzin and Duvall, two others are hoping to compete again in Best Drama Guest Actress after their prior victories: Bledel as a former handmaid who escapes Gilead and Jones as the mother of Offred (Elisabeth Moss). If either of these ladies repeats at the Emmys, they would be in rare company indeed as only Margo Martindale (“The Americans”) has prevailed twice in this category for the same role.

While we won’t know which actors are in contention for Season 3 of “The Handmaid’s Tale” until the Emmy nomination ballots are unveiled in July, Hulu did provide to Gold Derby a list of category submissions (see below). Of course, more names might be added by the studio on the final Emmy ballot. Also note that performers not included on this list may well be submitted by their personal reps.