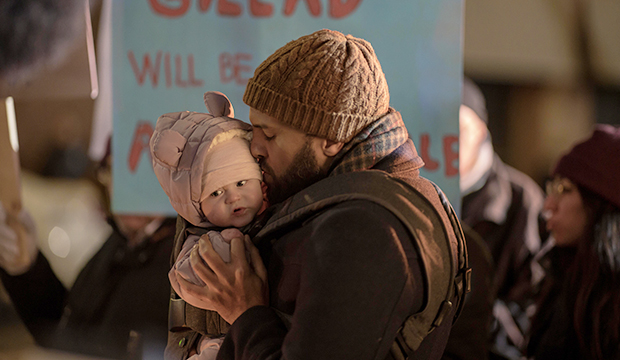 After competing as a supporting actor for the first two seasons of Hulu’s “The Handmaid’s Tale” at the Emmys, O-T Fagbenle has now ventured into the drama guest actor category for the third installment, where he vies for his maiden career nomination. On the show, he plays June’s (Elisabeth Moss) husband Luke Bankole, who was separated from his wife and daughter Hannah (Jordana Blake) before they were captured, but managed to cross the northern border into Canada early on. Will Fagbenle finally be sent good weather by Emmy voters?

Having appeared in six of the third season’s 13 episodes — “Night” (3.01), “Mary and Martha” (3.02), “God Bless the Child” (3.04), “Unknown Caller” (3.05), “Sacrifice” (3.12) and “Mayday” (3.13) — the actor just barely managed eligibility in the guest actor category, but could now greatly benefit from his character having substantial screen time as well as a fully fleshed-out arc. The season starts out with Luke and Moira (Samira Wiley) taking in Emily (Alexis Bledel) and baby Nichole when they arrive in Toronto, but Luke quickly pushes Emily to reach out to her wife who also resides in the city. Fagbenle conveys his character’s grief through anger that he (mis)directs at Emily, in whom Luke sees his wife. The self-blame with which he burdens himself for having failed in saving his two loved ones surfaces in Fagbenle’s raw, sincere delivery of “June went back to save her [Hannah] because I couldn’t,” which he tells Nichole later in the episode.

Tailor-made for the actor’s Emmy submission if nominated, the fifth episode sees Luke caught off guard when he receives a phone call from an unknown caller, who ends up being June. Fagbenle’s performance is gut-wrenching as Luke hears his wife’s voice for the first time in years in a phone call that is, however, arranged. June asks Luke to meet the Waterfords at the airport with Nichole, to which he retorts: “Not him.” The line, which refers to Fred (Joseph Fiennes) directly, is imbued with a sense of spite, pursuant to how he feels about the Commander. During his meeting with Serena (Yvonne Strahovski) — the woman who repeatedly held down his wife as her husband raped her — the hatred simmering below his surface is palpable. Combined with a handful of mistrustful smirks sprinkled in by Fagbenle throughout the scene, it’s clear that Luke doesn’t fall for Serena’s manipulative attempt to garner empathy.

In his last scene, he listens to a cassette with a recording from June, who says that Nichole was born out of true love and asks of Luke to build a life of his own in Canada like she did in Gilead — not for her, but for their daughter. For most of the scene, as Luke, Fagbenle is at the verge of crying, but only fully breaks into tears at June’s mention of Hannah. Thus, all underlying feelings of which we’ve seen glimpses throughout the hour — anger, sorrow and pain — finally come to light, establishing a poignant ending to Luke’s arc in this episode.

He doesn’t return until the penultimate outing, in which he comes face to face with Fred, who’s placed in a detention facility after (unintentionally) crossing into Canada and being arrested for a number of crimes. Opposite the man who’s repeatedly violated his wife, Luke is no longer simmering but boiling, with fury, spite and utter disgust, all three feelings of which are easily readable but distinguishable on Fagbenle’s face. All season long, Luke has been a rumbling volcano, but it’s when Fred cheekily tells him that he’s “changed” June that he erupts. Finally, the actor appears just briefly in the final few minutes of the finale, but watching the hope glimmering in his eyes as Luke prays to see his daughter among the hundreds of Gileadean children who arrive on Canadian soil (an escape plan orchestrated by June herself) morph into despondency as soon as he realizes she isn’t, is arguably the most memorable single facial expression of the season.

The Emmy stars may have finally aligned for the British actor this year. A Best Drama Series winner in 2017, “Handmaid’s” has produced a total of 14 acting noms (for nine different cast members) and six wins (for six different cast members), six and four of which, respectively, have been in the guest categories alone. Thanks to Bradley Whitford, the show finally broke into Best Drama Guest Actor for the first time last year and even prevailed for the veteran actor, who competes in supporting for the third season.

SEE ‘The Handmaid’s Tale’ boss Bruce Miller: ‘It would make me very happy to have my show move into irrelevancy’ [EXCLUSIVE VIDEO INTERVIEW]

Speaking of supporting, of late, we’ve seen both drama guest acting categories favor performers who first contended as supporting players for their respective shows and then dropped down to guest later in their runs. Both 2018 drama guest acting champs, Ron Cephas Jones (“This Is Us”) and Fagbenle’s co-star Wiley, triumphed in the guest categories for their shows’ sophomore installments after being nominated in supporting for the freshman ones. Even Whitford, who, granted, prevailed for his debut episode, had already been on voters’ screens as a supporting actor on “Handmaid’s” when they checked him off, since the show aired its third season during the summer last year. That said, Fagbenle’s co-star Max Minghella, who plays Nick on the show and was also entered as a supporting actor for the first two seasons, is gunning for his first-ever career Emmy citation in similar fashion. However, after a game-changing revelation in the sixth episode, his character disappears in the second half of the season, while Fagbenle’s material is spread out.

Joining Fagbenle and Minghella in this race is past Emmy nominee Christopher Meloni, who plays Commander Winslow on the show. As of this writing, none of the three actors are in the top six in our odds, which features Jones, Andrew Scott (“Black Mirror”), Charles Dance (“The Crown”), Jason Bateman (“The Outsider”), Gerald McRaney (“This Is Us”) and James Cromwell (“Succession”). Fagbenle sits in ninth place, while Meloni and Minghella are neck and neck in 12th and 13th, respectively.