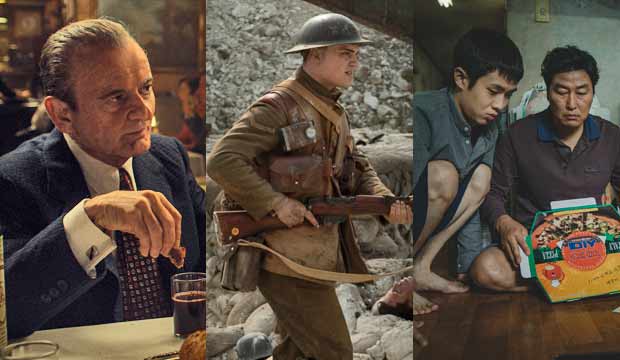 We’re predicting all 23 Critics’ Choice Movie Awards categories, but we’re not expecting a big haul for any one film, and Best Picture is almost too close to call. Scroll down to see our predictions listed by film, which are based on the combined forecasts of thousands of Gold Derby users.

“The Irishman” is the most nominated film with 14 bids, and it’s predicted to lead all winners, but only with three prizes: Best Picture, Best Adapted Screenplay (Steven Zaillian) and Best Visual Effects. And it leads our Best Picture predictions by the narrowest of margins. It’s backed by most of the Expert journalists we’ve polled from top media outlets, but the Editors who cover awards year-round at Gold Derby are mostly backing “Parasite.” Both films get odds of 13/2, though “Irishman” gets the edge as of this writing (that may change by the time you read this).

Surprise Golden Globe winner “1917” is also predicted to win three awards: Best Cinematography, Best Score and Best Action Film, the last of which is a special genre category not handed out by other major awards groups.

After that there are four films predicted to claim two awards apiece: “Parasite” will take Best Director (Bong Joon Ho) and Best Foreign Language Film, and as mentioned above it’s thisclose to winning Best Picture too.

“Once Upon a Time in Hollywood” is the front-runner for Best Supporting Actor (Brad Pitt) and Best Production Design. “Marriage Story” is tipped to win the other supporting prize for Laura Dern as well as Best Original Screenplay for Noah Baumbach. And “Jojo Rabbit” will claim two awards that don’t correspond to any Oscar categories: Best Comedy Film and Best Young Actor or Actress (Roman Griffin Davis).

SEE2020 Producers Guild Awards nominations: Oscar frontrunners including ‘1917,’ ‘The Irishman,’ ‘Joker,’ ‘Once Upon a Time’

Do you agree with our consensus that the journalists of the Critics’ Choice Association will spread their awards far and wide, or is there a juggernaut in the making that we’re underestimating? Check out of predictions by film below, and join the awards season discussion with your fellow cinephiles here in our forums.

Be sure to make your Critics’ Choice predictions so that Hollywood studio executives and top name stars can see how their films are faring in our odds. Don’t be afraid to jump in now since you can keep changing your predictions until just before winners are announced on January 12. And join in the fierce debate over the Critics’ Choice Awards taking place right now with Hollywood insiders in our film forums. Read more Gold Derby entertainment news.