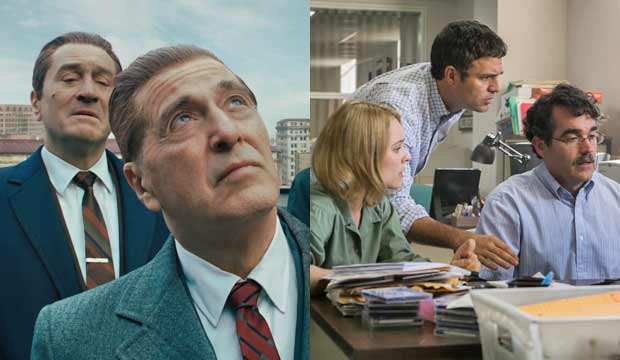 It was admittedly a bad night for “The Irishman” at the Golden Globes: it went in with five nominations, but came away empty-handed in the night’s biggest shutout. So it’s down and out in the Oscar race too, right? Maybe not. The Globes don’t necessarily reflect the tastes of the awards voters in the academy, and it wasn’t too long ago that a film was blanked at the Globes only to win the top Oscar: “Spotlight” (2015).

“Spotlight” had three Globe nominations: Best Film Drama, Best Film Director (Tom McCarthy) and Best Screenplay (McCarthy and Josh Singer). It lost the first two categories to “The Revenant” and the last one to “Steve Jobs” (Aaron Sorkin). But that was a divided Oscar season. “Spotlight” ended up winning the top SAG Award for its ensemble cast, “The Big Short” took the Producers Guild prize, and “Revenant” ruled the Directors Guild Awards and the BAFTAs. But the top Oscar is decided by a preferential ballot, and “Big Short” and “Revenant” were both divisive films, so “Spotlight” came back at the last minute as the academy’s consensus choice.

That means “Irishman” doesn’t have to sweep all awards from here on out, it could benefit just from having another divided year. And we might get just that. No one decisive front-runner has emerged this season, with “Parasite,” “Once Upon a Time in Hollywood” and “1917” also looking like major Oscar contenders — and all three of those were big winners at the Globes.

And these days it might also help, somewhat ironically, that “Irishman” has shown signs of vulnerability. After all, “La La Land” looked like a sure thing in 2016 with its record-tying Golden Globe wins Oscar nominations, but backlash over its dominance might have prompted some voters to rank it lower on their ballots, opening the door for “Moonlight’s” stunning upset. Similarly, “Spotlight” was the plucky underdog with strong rooting factor against the nominations leader “The Revenant.” And “Roma” was looking like a safer and safer bet last year before it was felled by “Green Book.”

Since the Golden Globes, “Once Upon a Time” has moved into the lead in our official Oscar odds for Best Picture, so now it has the target on its back, and maybe an underestimated “The Irishman” can whack it and they won’t even see it coming.