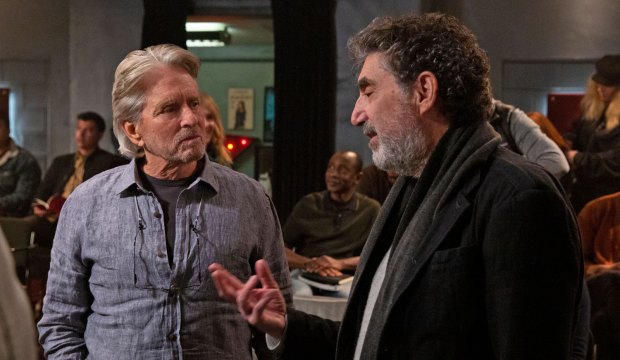 When you look at writer-producer Chuck Lorre‘s resume, you might assume he already has Emmys spilling off his mantel, but he surprisingly hasn’t won one yet. Could that change this year thanks to the second season of “The Kominsky Method,” his comedy about an acting coach (Michael Douglas) and his friendship with his agent (Alan Arkin). It dropped on Netflix last fall.

Lorre is the creator of classic network sitcoms like “Grace Under Fire,” “Cybill” and “Dharma and Greg,” but he didn’t earn his first Emmy nomination until 2004, when he was up for Best Main Title Theme Music for co-writing the theme for “Two and a Half Men.” Then he earned three Best Comedy Series nominations for that show (2006-2008) and another four Best Comedy noms for “The Big Bang Theory” (2011-2014).

Alas, he started rising at the Emmys at a time when multi-camera network sitcoms were starting to fall out of favor in the industry. The last such show to win Best Comedy Series was “Everybody Loves Raymond” in 2005 for its final swan song.

But that didn’t stop Lorre from winning multiple Emmys for his actors. Christine Baranski won Best Comedy Supporting Actress in 1995 for “Cybill.” Jon Cryer won twice for “Two and a Half Men” (as a supporting actor in 2009 and as a lead in 2012), and Kathy Bates won for her guest performance on the show in 2012, which was actually the first Emmy of her career.

Melissa McCarthy won Best Comedy Actress for “Mike and Molly” in 2011; Lorre didn’t create that show, but he was a writer and executive producer. And “Mom” won Best Comedy Supporting Actress twice (2014-2015) for Allison Janney‘s turn as a recovering addict whose daughter has also struggled with substance abuse. But Lorre’s biggest success so far was “Big Bang,” which won its star Jim Parsons a record-tying four Best Comedy Actor titles (2010-2011, 2013-2014). And he earned another legendary performer their first ever Emmy: Bob Newhart took home Best Comedy Guest Actor in 2013.

But there have been no wins so far for Lorre’s producing or writing. “The Kominsky Method” could be his strongest chance yet since it’s a single-camera comedy like the last 14 Best Comedy Series winners were, and it’s a streaming series like the last two victors, “The Marvelous Mrs. Maisel” (2018) and “Fleabag” (2019). It has the deep pockets of Netflix on its side and a storyline about showbiz veterans that will resonate with the TV insiders who vote for the Emmys.

SEENetflix schedule: Here’s what is coming and leaving in May 2020

“Kominsky” already had a breakthrough at last year’s Emmys, earning nominations for Douglas and Arkin. The show itself wasn’t nominated for Best Comedy Series, but this year the race is wide open since two of last year’s nominees (“Veep” and reigning champ “Fleabag“) ended their runs and two others (“Barry” and “Russian Doll”) won’t have any new episodes during this eligibility period.