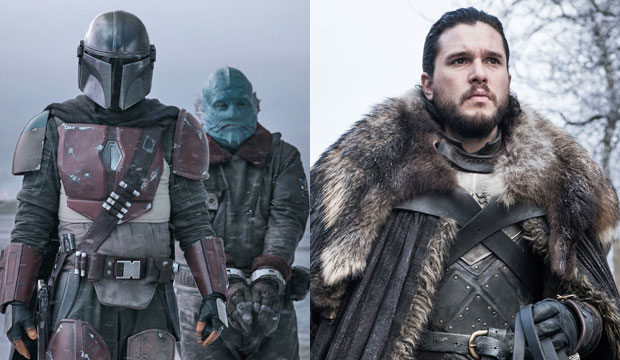 “The Mandalorian” premiered last fall as the flagship series of the Disney Plus streaming platform. The action-adventure drama about a mysterious bounty hunter (Pedro Pascal) protecting an alien child (if you’ve been anywhere on the internet in the last six months you’ve probably seen thousands of Baby Yoda memes by now) doesn’t necessarily seem like awards bait, but after “Game of Thrones” left the Emmy stage with a record haul, could we be underestimating the potential of “The Mandalorian” to fill the void?

The final season of “Thrones” was its most divisive with many fans decrying the finale and even petitioning for a redo, but it nevertheless cleaned up with a record-breaking 32 nominations (more than any other drama series in a single season) and a record-tying 12 wins (the most for a continuing series in a single year, tying its own record). That included a record-tying fourth victory for Best Drama Series (the most for any show in that category). Over the course of its eight seasons, “Thrones” won 59 times overall, which was (you guessed it) the all-time record for a narrative series.

All that despite being a fantasy series about dragons, magic and prophecies, which Emmy voters used to turn up their noses at. No genre show ever won Best Drama Series until “Lost” in 2005, so “Thrones” rewrote the rules about what prestige television can be, busting down the doors that had kept sci-fi and fantasy out of top categories. Much of its success was fueled by its extravagant production values, which made it a juggernaut at the Creative Arts Awards: in its last season 10 of its wins were for crafts below the line, with only 2 wins during the main telecast (Best Drama and Best Drama Supporting Actor for Peter Dinklage).

SEEEmmy spotlight: Taika Waititi (‘The Mandalorian’ director) could use momentum from his Oscar win to score an Emmy nomination

Now comes “The Mandalorian,” a sci-fi series set in the “Star Wars” universe. It also has lavish production values, and one could easily imagine it earning nominations in the double digits in Creative Arts races alone for achievements like visual effects, sound, editing, stunts, costume design, production design, makeup, cinematography and more. And if enough behind-the-scenes artists and craftspeople line up behind the show, it could be a bigger contender for Best Drama than we’re giving it credit for.

The absence of “Game of Thrones” means there are 32 vacancies for nominations, and “The Mandalorian” could fill many of them, especially since its first season was better received than “Game’s” last season. Coincidentally, the show has another “Thrones” connection since its star Pascal previously appeared on the HBO fantasy epic as Oberyn Martell, who had an unfortunate run-in with a Mountain.

But it’s not like “The Mandalorian” doesn’t have competition for those open “Thrones” slots. Several shows are eligible again this year after sitting out the 2018-2019 season, including “Stranger Things,” “The Crown” and “Westworld,” which are just as technically impressive as “The Mandalorian” and have the benefit of an established track record with television academy voters.

Still, having the promotional muscle of Disney behind you can’t hurt, and the “Star Wars” universe has been embraced across the industry, from the consistent Oscar nominations for its live-action feature films to the Daytime Emmys it has won for its “Clone Wars” animated series. And don’t forget those memes — silly as they may seem, Baby Yoda has given the show a lasting cultural relevance that could keep it in voters’ minds as they’re marking their ballots this summer. Nominate it they will?