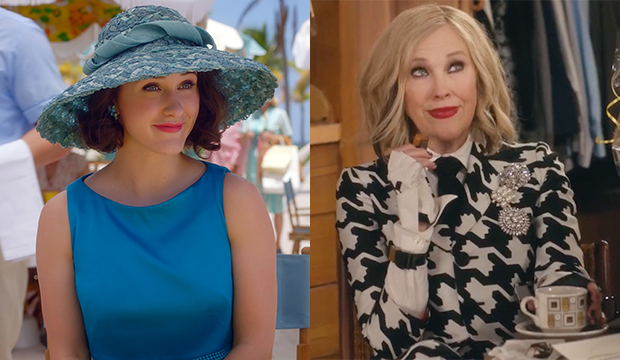 For the past five months, the Comedy Series race at this year’s Emmy Awards has been a dead-heat between former champion “The Marvelous Mrs. Maisel” and ascendant underdog “Schitt’s Creek,” and the nominations announcement on July 28 did little to tip the scale decisively in either’s direction. While “Maisel” once again leads the comedy field with the most nominations, landing an enviable 20 bids, “Schitt’s Creek” is right on its heels with 15, which is an impressive three-fold increase from its haul last year.

With such a competitive race in the offing, even small clues in the nominations may highlight which frontrunner has an advantage, however small, and in this particular contest the Comedy Writing category might be the most significant place to look. For the second year in a row, “Maisel” missed out on a writing nomination, whereas “Schitt’s Creek” landed two bids––one for its series finale penned by creator and star Daniel Levy and the other for standout mid-season episode “The Presidential Suite” by David West Read. Just how critical might this “Maisel” snub be in the neck-and-neck contest for Comedy Series?

If the past five years are any indication, a writing nomination is an integral step toward a Comedy Series victory. In three of those five years, wins in those two categories went hand in hand: “Fleabag” and Phoebe Waller-Bridge in 2019, “Maisel” and Amy Sherman-Palladino in 2018, and “Veep” and Armando Iannucci, Tony Roche, and Simon Blackwell in 2015. “Veep” won Series in 2016 and 2017, too, and in each of those years it had two writing nominations, which likely divided its support.

Though a small sample, 2015 is strategically an important place to start, as it marks the year that voting on the winner changed from a select panel to the whole membership of the peer group. But even accounting for that shift in voting procedure, the prior 15 years reveal more or less the same trend. Dating back to 2000, series champions “Sex and the City,” “Everybody Loves Raymond,” “Arrested Development,” “The Office,” and “30 Rock” have had at least a single writing nomination each time they took home the top honor.

“Modern Family” stands out from this otherwise consistent pattern, as it won three of its five Comedy Series races in years when it did not receive writing nominations. Crucially, though, in each of those instances––2012, 2013, and 2014––”Modern Family” took home the directing trophy, which seems to have more than made up for its Writing branch snubs.

Ironically, then, Comedy Directing might actually be a better bellwether of a Comedy Series victory. Indeed, in the last 20 years, only three series have won without at least a directing nomination: “Friends” in 2002, “Everybody Loves Raymond” in 2003, and “The Office” in 2006. Notably, the “Friends” victory in 2002 is the only instance in the last two decades that a comedy won the top prize without either a writing or directing nomination. A sweep of all three categories happens more frequently than that, but it’s still somewhat rare, happening to just “Arrested Development” (2004), “Modern Family” (2011), “Maisel” (2018), and “Fleabag” (2019) in the last 20 years. “Schitt’s Creek” could extend that recent sweep streak for the third consecutive year this season.

“Schitt’s Creek” and “Maisel” are more evenly matched in directing, though. While “Maisel” has two directing bids to “Schitt’s” one, both got in all of the episodes they submitted on the Emmy ballot. The strategic single entry from “Schitt’s” might give it a leg up in the contest for a win, too, if a clear “Maisel” favorite doesn’t emerge between Sherman-Palladino’s episode (“It’s Comedy or Cabbage”) and her husband Daniel Palladino‘s (“Marvelous Radio”).

In a Series race this close, an edge like “Schitt’s” writing nomination might make all the difference. And even if “Schitt’s Creek” paddles its way through choppy waters to a Series victory in part because of the Writing branch, don’t anticipate a clean sweep. While “Fleabag” bested “Maisel” last year in the top category with that key writing bid in hand, “Maisel” outpaced it in sheer number of victories, including its Supporting acting wins. This rivalry up and down the Emmy ballot is sure to remain a nail-biter throughout the season.