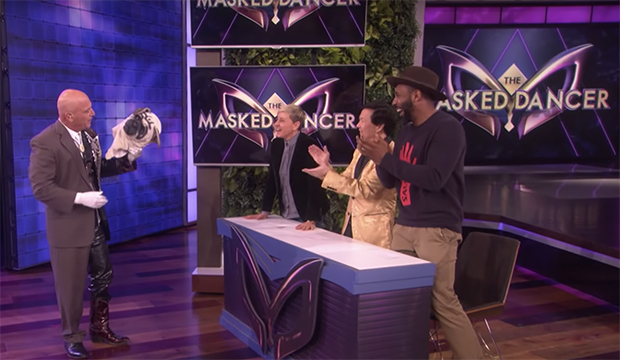 “The Masked Singer” is so last decade. Get ready for “The Masked Dancer.” Yes, that is a real thing. Fox has ordered a dance spin-off of “The Masked Singer,” the network announced at the Television Critics Association winter press tour on Tuesday.

Executive-produced by Ellen DeGeneres and based on a segment on her talk show that itself was inspired by “The Masked Singer,” “The Masked Dancer” will work exactly like the mothership does: Celebrities will be decked out in elaborate costumes and will hoof it on the dance floor, and everyone will have to guess their identity. DeGeneres played the game on her eponymous talk show with such stars as Howie Mandel, Sean Hayes, Derek Hough and “The Masked Singer” panelist Ken Jeong.

“We’re still blown away by ‘The Masked Singer’s’ massive impact on pop culture, but when Ellen debuted her own inventive segment, ‘The Masked Dancer,’ on her show, we were truly amazed,” Rob Wade, Fox’s president of alternative entertainment and specials, said in a statement. “We are thrilled to partner with Ellen on this new format and take ‘The Masked Dancer’ to a whole new creative level.”

SEE ‘The Masked Singer’ trailer: ‘Season 3 is about to be lit,’ teases Nick Cannon [WATCH]

Added DeGeneres: “This is gonna be just as fun and suspenseful as ‘The Masked Singer,’ but with a lot more Krumping. And I cannot wait!”

Panelists, a host and a premiere date for “The Masked Dancer” have yet to be announced.

A “Masked Singer” franchise felt inevitable after the show took Wednesday nights by storm last year, receiving a two-season renewal for the 2019-20 season; the third installment will kick off in the coveted post-Super Bowl slot on Feb. 2, with Jamie Foxx as a guest panelist. And networks are nothing if not opportunistic to capitalize on reality hits (see: all the junior spin-offs of various shows). Let’s hope “The Masked Dancer” fares better than “Skating with the Stars” did.