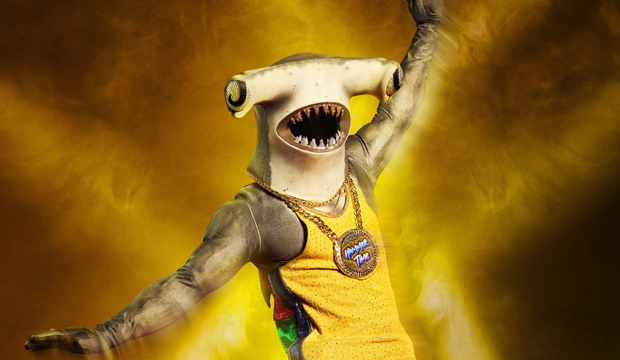 Been losing sleep over trying to figure out the names of the stars performing in elaborate costumes on “The Masked Dancer” premiere? We’ve done some sleuthing since episode one debuted on December 27 and was repeated three days later. We are pretty sure we have uncovered the identities of the four contestants who made it through to the next round, including the real identity of the Hammerhead. He got the series off to a rousing start with his sizzling routine set to “Everybody” by Backstreet Boys .

Forget the guesses by the panel (Paula Abdul, Brian Austin Green, Ken Jeong, Ashley Tisdale) that the Hammerhead is Carrot Top, Zac Efron or Joe Jonas. We’ve analyzed his individual clues and the ones given as a group for all 10 celebrities taking part on season 1 of “The Masked Dancer.” We are convinced we know who is hidden inside this cumbersome costume. Keep reading for “The Masked Dancer” spoilers, including our best guess as to the real name of the Hammerhead.

We heard the Hammerhead say, “As a shark, I’ve always been killing it. I’m a workaholic. But things have never come easy to me. I made them happen. I became famous almost too quickly. That early fame, it felt great at the time, but then it started to feel like my best moments were behind me. I had departed from who I was and then shifted into who I thought everyone wanted me to be. I just realized I wasn’t happy. So now I’m visiting everything I missed out on. By swimming away from what comes easy and swimming toward everything that used to scare me. I pumped the brakes on where my life was headed. Now, moving backwards is how I move my life forward. Staying hungry for learning, for love and for life.”

The single word spoken by Hammerhead in his undisguised voice was “dramatic.”

Putting all of this together along with the visual clues has us convinced that the Hammerhead is “Jersey Shore” stud Vinny Guadagnino.

Any fan of the long-running MTV franchise knows that Vinny is buff, just like Hammerhead. And they are the same height. The costume certainly suggests the seaside and taken together references Vinny’s SyFy film “Jersey Shore Shark Attack.”

Other visual clues tie in to Vinny’s other TV appearances: we see the word “talk” in a cup of alphabet soup: Vinny had his own talk show on MTV in 2013. Two years earlier, he guested on the show “The Life and Times of RJ Berger,” which would explain the shot of the hamburger.

SEE ‘The Masked Dancer’ spoilers: The Cricket is …

Vinnie’s best bud on “Jersey Shore,” DJ Pauly D, dropped a track last year with the title “Silver and Gold,” the same colors as Hammerhead’s grill. Vinny was also busy in 2019 as a featured dancer in the Chippendales show in Las Vegas.

But the biggest giveaway came via a clue that was posted on the show’s official Instagram: “”I bought someone I love a car for Christmas and it Jingle Bell ROCKed!” That is just what Vinny did for his mother last year.

We won’t get confirmation that Vinny Guadagnino is the Hammerhead till he is unmasked. That will only happen if he loses a match-up or wins the competition. Do you think we are right about the real name of the Hammerhead? Sound off in the comments section with your best guesses.