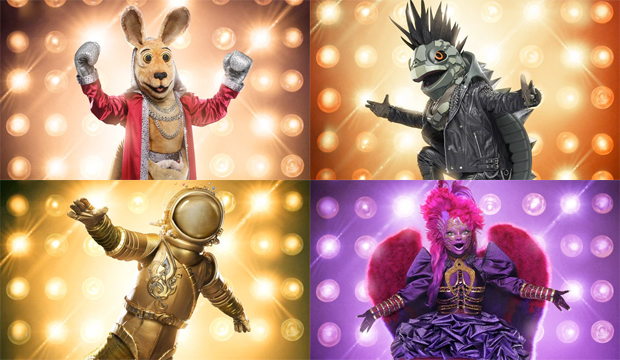 Last week on “The Masked Singer” the nine remaining celebrity contestants competed together on the same stage, but this week they were once again divided into groups. Up first on April 8 were Kangaroo, Turtle, Astronaut and Night Angel. The other four — Banana, Frog, Kitty and Rhino — will compete on April 22. At the end of Wednesday’s all-new hour, did panelists Robin Thicke, Nicole Scherzinger, Jenny McCarthy, Ken Jeong or guest judge Yvette Nicole Brown correctly guess this week’s secret identity? What about YOU at home?

Below, read our minute-by-minute “The Masked Singer” recap of Season 3, Episode 11, titled “The Mother Of All Final Face Offs, Part 1,” to find out what happened Wednesday, April 8 at 8:00 p.m. ET/PT. Then be sure to sound off in the comments section about your favorite costumed celebs on Fox’s reality TV show, the judges’ dumbest guesses, and who you think is hiding underneath all of the remaining masks.

8:00 p.m. — “Previously on ‘The Masked Singer’!” In last week’s 10th episode, the Super 9 took the stage in a special two-hour extravaganza. The bottom three contestants, based on audience voting, were Banana, Rhino and White Tiger. The judges then determined who would be going home, and they chose White Tiger. The costumed character removed his mask to reveal NFL superstar Rob Gronkowski. “My dance moves were always one of a kind and I always felt like I was never on rhythm,” he told Nick Cannon in his exit interview. Who will be unmasked tonight?

8:10 p.m. — Tonight’s first face-off will feature the Night Angel vs. Kangaroo. Kangaroo says she’s a bit intimidated by Night Angel and definitely feels like the underdog. Night Angel is up first singing “Man! I Feel Like a Woman” by Shania Twain. This isn’t the best she’s sounded vocally but she still struts around the stage like she owns it. This is a fun song, but the performance is falling a little flat for me. As a clue, security reveals an item from Night Angel’s bag: the image features a “Boss” tag, a snow globe, a bee and a crown. The panel guesses Night Angel could be Taraji P. Henson, Keke Palmer or Vanessa Williams.

8:20 p.m. — Kangaroo is singing “No Air” by Jordin Sparks tonight and she suddenly sounds more R&B than I ever noticed before. The first verse is pretty low and doesn’t show off much vocal range, but she kicks it up a notch in the chorus. Overall, I wasn’t really digging this song either! Night Angel left the door wide open but Kangaroo didn’t take advantage. I’m not sure who will win this one! As a clue, security reveals a record player, red lipstick, Big Ben, a ship in a bottle, a tag that says “First” — and the biggest curve ball of them all — Kangaroo says she has never sung in front of an audience until this show! The panel guesses Kangaroo could be La La Anthony, Keira Knightley, Blac Chyna or Ayesha Curry.

8:25 p.m. — The votes are in and the winner of the first face-off is Night Angel! She has advanced another week but Kangaroo still has a chance to move on if she can win the Smack Down later tonight.

8:30 p.m. — The second face-off tonight is Astronaut vs. Turtle. They’re almost mirror images of each other and the panel has made similar guesses about the identities of both of them. Both have kept the ladies swooning and now one of them will have to stand out in this heartthrob throw down. Turtle is channeling his real life heartbreak tonight. Astronaut is a shy guy in real life, but plans to win the audience over with his heart. Astronaut is up first singing “If I Can’t Have You” by Shawn Mendes. He doesn’t sound very good on the verses and can’t sing naturally in his lower register. He sounds much better when he’s belting or showing off his falsetto. I’d say this was a solid performance from Astronaut but he left the door open for Turtle. For his clue, security reveals the following items in his bag: an airplane, the White House, an accordion and the tag says “Warning: Do Not Open.” The panel guesses Ben Platt, Seth Green or Austin Mahone is the Astronaut.

8:40 p.m. — Turtle is up next singing “Let it Go” by James Bay. His voice sounds great tonight and this heartfelt ballad shows off those vocal chops. He lets it rip during the chorus getting a “Yaasss!” from Nicole and the audience is going wild for this one. He’s gonna smoke the Astronaut even though the panel is pretending it’s close. For Turtle’s clue, security reveals the following items in his bag: a tag that says “Never Keep Open This Bag,” a judge’s gavel, a baseball mitt, cologne and a queen passport. The panel guesses Turtle could be Adam Lambert, Joey McIntyre or Niall Horan.

8:45 p.m. — The audience vote is in and the winner of tonight’s second face-off is Turtle. Well deserved. If the Astronaut wants to remain in the competition he will have to take down Kangaroo in tonight’s Smack Down.

8:50 p.m. — It’s time for Kangaroo and Turtle to battle in a Smack Down. The winner will keep their mask on while the loser will be eliminated and forced to unmask in front of America. Let’s throw down! Kangaroo is singing “Hot Stuff” by Donna Summer to show off her sassy side but her vocals are a little dull. Astronaut is next performing “Bye Bye Bye” by *NSYNC. He’s got a bit more spark to his voice and I think he deserves to win. Let’s see if the audience agrees! Kangaroo tells Astronaut to “moonwalk out of here” and Astronaut responds that she may have shown off some “hot stuff, but we’re looking for something out of this world.” Smack talk! Who will be eliminated?

8:59 p.m. — The final votes are in and the winner of tonight’s Smack Down is the Astronaut! Kangaroo will be forced to unmask in front of America, but not before the panel gives their final guesses: Cat Deeley (Ken), La La Anthony (Robin), Blac Chyna (Nicole), Jordyn Woods (Jenny) and Ayesha Curry (Yvette). Finally, Kangaroo unmasks to reveal she is in fact Jordyn Woods! Jenny nailed it! Did you guess Kangaroo’s identity? That’s a wrap for tonight!