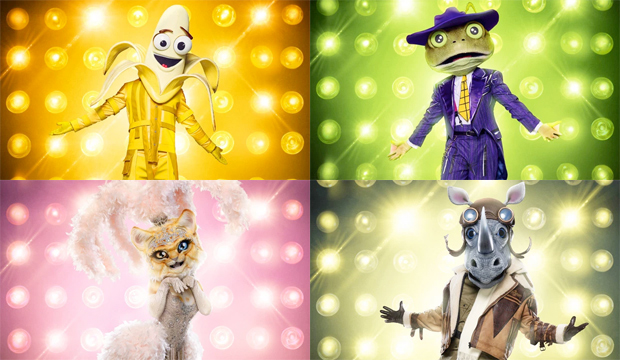 Heading into this week’s all-new episode of “The Masked Singer,” Banana was in danger of being peeled from the competition as he had the best odds of being eliminated. This country rocker took the stage alongside Frog, Kitty and Rhino for a pair of face-offs and an epic smackdown, but how did it all play out Wednesday night? And did panelists Robin Thicke, Nicole Scherzinger, Jenny McCarthy, Ken Jeong or guest judge Sharon Osbourne correctly guess this week’s secret identity?

Below, read our minute-by-minute “The Masked Singer” recap of Season 3, Episode 12, titled “The Mother Of All Final Face Offs, Part 2,” to find out what happened Wednesday, April 22 at 8:00 p.m. ET/PT. Then be sure to sound off in the comments section about your favorite costumed celebs on Fox’s reality TV show, the judges’ dumbest guesses, and who you think is hiding underneath all of the remaining masks.

8:00 p.m. — “Previously on ‘The Masked Singer’!” In last week’s sing-along episode, previous performances from the Top 7 were shown to viewers who were stuck at home due to the coronavirus pandemic. It was a fun night off from the competition as Turtle, Banana, Frog, Kitty, Astronaut, Night Angel and Rhino sang, danced and offered up new clues. Now that the sing-along is behind us, it’s back to the grind and one person will be eliminated tonight. Who will it be?!

8:05 p.m. — The first face-off tonight pits the Frog against the Kitty and Kitty plans on killing Frog with kindness. Frog and Kitty are the only face-off pair that have been together since day one, so they’re pretty tight. Kitty thinks Frog has incredible dance moves and stage presence, while Frog is intimidated by Kitty’s voice. Who will come out on top?

8:10 p.m. — Frog is up first performing “Fireball” by Pitbull. He’s definitely bringing energy to the stage and showing off those signature moves, but I can barely understand a word he’s saying. The audience seems to be having a ball, but this wasn’t my favorite performance from the amphibian. As an extra clue to Frog’s identity, we get a peak inside what security found in his bag. His tag says “Thank God It’s Frogday,” there is a Japanese flag, a pair of tennis shoes, a keyboard and an ice tray. That’s an odd collection of items! This leads the panel to guess Frog is Katt Williams, Alfonso Ribeiro or O’Shea Jackson, Jr.

8:15 p.m. — Kitty is up next singing “True Colors” by Cyndi Lauper. This is a more sensitive, vulnerable side of Kitty and she sounds great. I still don’t get the feeling she’s a professional singer, but Kitty definitely got pipes. The men in black bring out her bag and reveal some clues. The tag says “If found CALL ME??? Be a Hero!” and inside there is a dragon, a Pope hat what looks like dinosaur bones or something? Kitty also mentions “Grease,” leading the panel to guess Vanessa Hudgens, Emma Roberts and Kate Bosworth.

8:20 p.m. — It’s time for the audience to vote for who won this face-off. The winner is Frog! Kitty will have to compete in the smackdown to win her spot in next week’s Battle of the Sixes.

8:25 p.m. — Tonight’s second face-off is Banana vs. Rhino. Both of them were in the bottom three during the Super 9 so both have something to prove. The Rhino says when he puts too much pressure on himself he tends to perform worse. Meanwhile, Banana is so nervous he might need to write the lyrics on his hands! Who will win this face-off?

8:30 p.m. — Banana is up first singing “Knockin’ on Heaven’s Door” by Bob Dylan. He’s sitting at the piano and we’ll have to assume he’s not actually playing with his big gloves on. He sounds great tonight and has some nice interactions with the audience. This might be his best performance to date! Sharon seems convinced it’s Bret Michaels. For a clue, we see what he’s got in his bag that has been tagged “Backstage Crew.” I can also see a cat, bug spray, a Nashville sheriff badge and a tongue. This encourages the panel to guess Banana is Bret Michaels, Keith Urban or Kid Rock.

8:40 p.m. — Rhino is up next performing “10,000 Hours” by Dan + Shay and Justin Bieber. Rhino has always had a country flare about him and he sounds like a professional. Unfortunately, this performance might be a little low key for a face-off and I think he’s in trouble. There was no energy! For a few extra clues we check out some things in his bag, which is tagged “Rhino Secrets.” We see a Christmas stocking, a seal, a nice country house and a flag of Tennessee. This leads the panel to guess Sam Hunt, David Hasselhoff and Jonathan Scott.

8:45 p.m. — The singer with the most audience votes is Rhino! That means Banana will join Kitty in the smackdown and Rhino has advanced to the Battle of the Sixes.

8:55 p.m. — It’s time for an epic smackdown between Kitty and Banana! Kitty is up first and she’s she goes a sultry route singing “Unstoppable” by Sia. She sounds good and is putting up a formidable fight. Banana is up next and he’s spicing things up with “Brick House” by The Commodores. He’s hoping to charm the audience by having a bit of fun on stage and this is appears to be a close contest.

8:59 p.m. — The audience has voted and the winner of this smackdown is Kitty! That means Banana will have to unmask in front of America. But first, the panel will submit their final guesses: Bret Michaels (Jenny, Sharon, Nicole, Robin) and Brad Paisley (Ken). Are they correct? Banana pulls off the mask to reveal himself as Bret Michaels! The panel was correct, except Ken of course. That’s a wrap for tonight? Who will go home next week in the Battle of the Sixes?