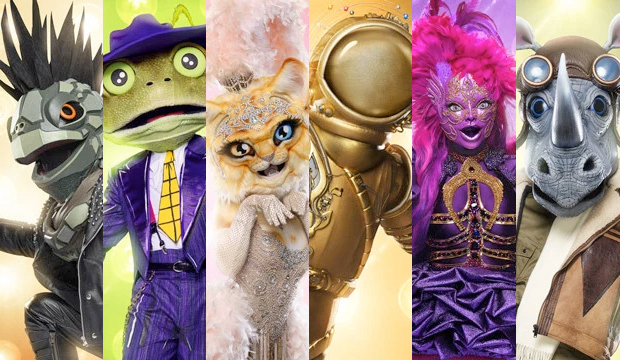 Heading into this week’s all-new episode of “The Masked Singer,” Rhino was in danger of becoming extinct as he had the best odds of being eliminated. This horned mammal took the stage alongside the rest of the Top 6 costumed celebs on Wednesday night: Turtle, Frog, Kitty, Astronaut and Night Angel. Who was unmasked this week by host Nick Cannon? And did panelists Robin Thicke, Nicole Scherzinger, Jenny McCarthy, Ken Jeong or guest judge Gordon Ramsay correctly guess their secret identity?

Below, read our minute-by-minute “The Masked Singer” recap of Season 3, Episode 13, titled “The Battle of The Sixes: The Final 6,” to find out what happened Wednesday, April 29 at 8:00 p.m. ET/PT. Then be sure to sound off in the comments section about your favorite costumed celebs on Fox’s reality TV show, reflect on every reveal in every season, and tell us who you think is hiding underneath all of the remaining masks.

8:00 p.m. — “Previously on ‘The Masked Singer’!” In last week’s 12th episode, four celebrities faced off in two separate match-ups: Frog vs. Kitty and Banana vs. Rhino. Frog and Rhino won their face-offs, which sent Kitty and Banana to the smackdown. Banana underwhelmed the panelists and so he was forced to peel off his suit to reveal rock star Bret Michaels. “I’ve never had such a great time,” he said in his post-show interview. Who will be eliminated tonight?

8:10 p.m. — Kitty is up first tonight and after nearly being eliminated last week, she’s more motivated than ever. She’s been on many stages and played many roles in her nine lives, but none have ever felt like this. We see a heavy wardrobe (does Kitty have a fashion line?), a silver apple, a monkey and a jukebox playing a record called “Mind Your Manners” by the Seal Sisters. Tonight, Kitty wants to show a new side of herself singing “Diamonds Are a Girl’s Best Friend” by Marilyn Monroe. She is a decent singer, but I still don’t think Kitty is a professional songstress. She definitely upped her entertainment value this week though! For an added clue, we get to see some “masked munchies” and Kitty’s is a layered chocolate cake. The panel guesses Kitty could be Charlotte Church, Lea Michele or Eva Longoria.

8:15 p.m. — Next up is the Rhino and although he loves this show, he admits it’s complete crazy town. He says he’s a solitary creature and needs to reflect on who means the most to him — his wife and his baby rhinos. He’s doing some yoga in the hills near a bar stool as he says he hopes to show his kids it’s never too late to rewrite your story. Tonight he’s singing “Die a Happy Man” by Thomas Rhett. Rhino definitely sounds like a seasoned country singer and the panel is impressed by his deep, husky voice on this ballad. For his special clue, Rhino shows off his favorite dish, spaghetti and meatballs. This brings the panel to guess he is Jeff Bridges, Charles Kelley or Barry Zito.

8:25 p.m. — Frog is the third singer tonight and he admits he’s surprised he made it past the second round of this competition. Joining a show with “singer” in the title was intimidating and we see him playing around with a basketball with some chocolates nearby. We also see a red jersey with the number “23” so maybe he’s from Chicago if that’s a Michael Jordan reference. We also see a wall of clues that includes the number 13, a twinkie and “Police News.” Tonight he’s singing “Whatever It Takes” by Imagine Dragons, which is a real tongue twister. Frog may be a rapper in a singing competition, but he always brings the house down when he performs and loves showing off the dance moves. For his added clue, Frog shows off a masked munchie of catfish. The panel guesses Frog could be Lil Jon, Bow Wow or Omarion.

8:35 p.m. — Night Angel is up next and she’s dead set on flying through this round. She feels blessed to have gotten the call to be on the show and says she has received many calls throughout her life, some which even upended it. She mentions “Free Your Mind” and an angel hotline. Being on this show has awoken parts of herself she’s been keeping on the down low. Then we see some fish hooks before she hits the stage singing “Black Velvet” by Alannah Myles. Night Angel definitely sounds like a seasoned singer who isn’t a novice to the stage. I like this rock edge she’s showing tonight. Jenny calls it the best performance she’s seen on “The Masked Singer” ever! For her added clue, Night Angel shows a dish of fried bugs. It’s a delicacy! Nick even tastes one as the audience completely overreacts and makes obnoxiously shocked faces. The panel thinks Night Angel could be Rozonda “Chilli” Thomas, Kandi Burruss or Dawn Robinson.

8:45 p.m. — Landing in the bottom two a few weeks ago was a rude awakening for Astronaut. While he counts his lucky stars he’s still afloat in this competition, we see a Joker card surrounded by four aces. Back on his home planet he was very comfortable for a very long time, but then started to feel like he was frozen. He stopped growing, so he decided to seek out new worlds — and his clue package focused in on a watch. Tonight he’s singing “Story of My Life” by One Direction. He’s a pretty solid singer and definitely sounds like he’s done it for a living. For his special clue, Astronaut’s special dish is a king cake, a Mardi Gras staple. The panel guesses he is Jonathan Groff, Skylar Astin or Jonathan Taylor Thomas.

9:50 p.m. — The last singer tonight is the Turtle. When he started this competition he had no idea how it would change him. For his whole career he’s been riddled with insecurities about not being good enough. He struts by a giant chess board with two large clocks. We also see a big stuffed heart. Hmm. Tonight he’s singing “Stay” by Alessia Cara as he emerges from some sort of futuristic looking egg. Turtle throws in some extra dance moves, which makes everyone think he’s in a boy band. For his special clue, the Turtle shows off a dish of chips and apple salsa. The panel guesses Turtle is Gavin DeGraw, Adam Lambert or Zayn Malik.

9:59 p.m. — It is time to find out which singer lost the Battle of the Sixes. The other five will advance to next week’s quarterfinals. The singer forced to unmask is the Astronaut! But before we find out  his true identity, let’s get the final guesses from the panel — Ben Platt (Jenny), Jonathan Taylor Thomas (Robin and Gordon), Hunter Hayes (Nicole) and Skylar Astin (Ken). Are any of them right? The Astronaut slowly unmasks to reveal he is, in fact, Hunter Hayes! Nicole for the win! That’s a wrap for tonight. Did you guess who was under the Astronaut mask?