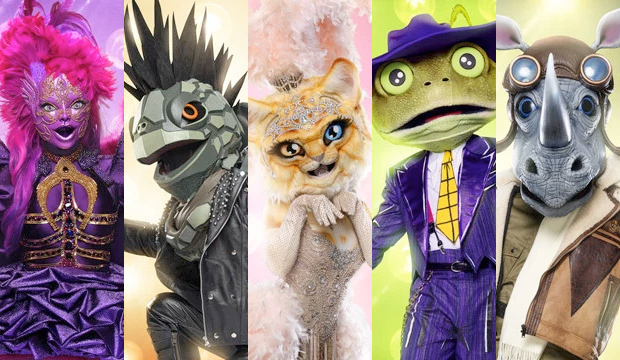 Heading into this week’s “The Masked Singer” quarter-finals, there were only five costumed celebrities still in the running to win the Golden Mask: Night Angel, Turtle, Kitty, Frog and Rhino. Were Gold Derby’s odds correct that Rhino was most in danger of being unmasked by host Nick Cannon? And did regular panelists Robin Thicke, Nicole Scherzinger, Jenny McCarthy, Ken Jeong or guest judge Jeff Dye correctly guess their secret identity?

Below, read our minute-by-minute “The Masked Singer” recap of Season 3, Episode 14, titled “A Quarter Mask Crisis: The Quarter Finals,” to find out what happened Wednesday, May 6 at 8:00 p.m. ET/PT. Then be sure to sound off in the comments section about your favorite costumed celebs on Fox’s reality TV show, reflect on every reveal in every season, and tell us who you think is hiding underneath all of the remaining masks.

8:00 p.m. — “Previously on ‘The Masked Singer’!” In last week’s 13th episode, the remaining half-dozen celebs gave it their all in the “Battle of the Sixes.” Astronaut underwhelmed the panelists and so he was forced to remove his spacesuit, revealing country singer Hunter Hayes. “It was a great chance for me to sort of hit a reset button,” he said in his post-show interview. Who will be eliminated tonight?

8:10 p.m. — Frog is up first in tonight’s quarterfinals and we see some clues to indicate he has a child. He says he struggled to find his footing before he had his tadpole and we see some loaves of possibly french bread and a hawk as he dances around on a hay bail in a barn. Tonight he’s singing “Bust a Move” by Young MC. Per usual Frog has some great flow and moves great on stage. He’s a great performer with a fun bunch of amphibians dancing behind him. As an added clue, we see a stolen package from his doorstep and it appears to be small private jet. This leads me to believe it’s Bow Wow because he once had a bit of a scandal when he tweeted out a picture of himself on a fake private jet. The panel thinks Frog is Anthony Mackie, Bow Wow, Derek Hough (come on Ken!) or Sir Mix-a-Lot.

8:20 p.m. — Kitty is up next and we see some clues that say she began traveling all over the world when she was very young. People didn’t seem to want her to grow up and now her career is up in the air. She mentions “Over the Rainbow,” but now she’s performing “Back to Black” by Amy Winehouse. She’s giving her sultry best while sprawled across a piano on the stage. Jenny mentions how comfortable she looks on stage and it’s starting to become clear she’s done this for a while. Her extra clue package is a bow and arrow. The panel guesses Kitty is Lea Michele, Ashley/Mary-Kate Olsen or Vanessa Hudgens.

8:30 p.m. — The Rhinos is up next and we learn that before his wife came along he had a lot of struggles. It hints at him having three children and we see some ballet slippers which may be a clue to his wife’s  profession. Tonight he’s singing “You’ve Lost That Lovin’ Feelin'” by The Righteous Brothers. He still has that country twang but he’s got a good voice and he’s giving some sensual moves tonight. Definitely a different kind of performance for him and we’ll see if it pays off. His extra clue package is a Navy hat that he says holds a very special meaning. The panel thinks Rhino is Jason Aldean, Trace Adkins or David James Elliott.

8:40 p.m. — It’s time for Night Angel to perform and she says her music career started when she was just four years old singing along to Donna Summer. We see some song titles including one from Destiny’s Child, which may be something she’s written. We also see Colombia shown on a map. She says she hasn’t always been known for singing. Tonight she’s performing “Last Dance” by Donna Summer and really showing off those pipes more than ever. Jenny thinks Night Angel is taking home the golden mask. Her extra clue package is snow boots and goggles. This leads the panel to guess Tionne “T-Boz” Watkins, Tameka “Tiny” Harris or Alicia Keys.

8:50 p.m. — Turtle is up last tonight and he mentions underneath his shell he’s a regular, insecure guy. There are a lot of comic book references, a wedding cake and a mention of 1999. We also see some poker chips and he mentions “high hopes.” Tonight he’s singing “Fix You” by Coldplay. This is definitely a more sensitive side of the Turtle and he sounds beautiful serenading the crowd while Nicole summons her tears. This seems to be the performance of the night. Turtle’s extra clue package is a creepy zombie! The panel guesses Turtle is Norman Reedus, Howie Dorough or Jesse McCartney.

8:59 p.m. — The people have spoken and the singer going home is Kitty! But before the pretty Kitty unmasks, the panel submits their final guesses: Vanessa Hudgens (Nicole), Mary-Kate or Ashley Olsen (Jeff), Ashley Tisdale (Robin), Anna Kendrick (Ken) and Lea Michele (Jenny). Are any of them correct? No! It’s actually platinum-selling opera singer Jackie Evancho! The skunked the judges, but unfortunately won’t be making the semi-finals. That’s a wrap for tonight.