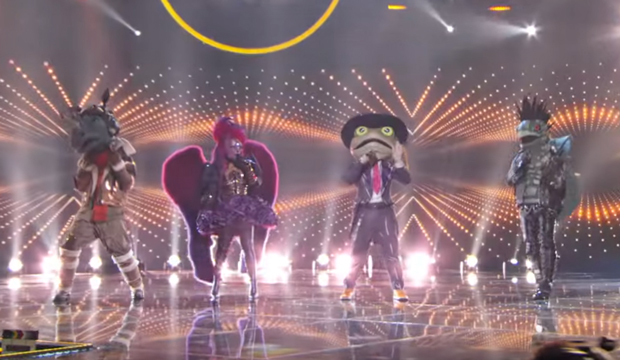 Heading into “The Masked Singer” semi-finals, there were only four costumed celebrities still in the running to take home Season 3’s Golden Mask: Rhino, Night Angel, Frog and Turtle. Were Gold Derby’s odds correct that Rhino was most in danger of being unmasked by host Nick Cannon at the end of the hour? And did regular panelists Robin Thicke, Nicole Scherzinger, Jenny McCarthy, Ken Jeong or guest judge Jay Pharoah correctly guess their secret identity?

Below, read our minute-by-minute “The Masked Singer” recap of Season 3, Episode 15, titled “A Day In the Mask: The Semi Finals,” to find out what happened Wednesday, May 13 at 8:00 p.m. ET/PT. Then be sure to sound off in the comments section about your favorite costumed celebs on Fox’s reality TV show, reflect on every reveal in every season, and tell us who you think is hiding underneath all of the remaining masks.

8:00 p.m. — “Previously on ‘The Masked Singer’!” In last week’s 14th episode, the remaining five celebs gave it their all in the quarter-finals, but it was the end of the road for Kitty. The sultry feline was forced to remove her whiskers, revealing opera singer Jackie Evancho. “I wanted to show a different side of myself,” she said in her post-show interview. Who will be eliminated tonight?

8:05 p.m. — The semifinalists kicked off the show singing “The Best” by Tina Turner while some random clues were tossed around. For Night Angel we saw a football, Rhino had globes, Frog’s hat and a photo alum from Turtle. I’m not sure how helpful that was.

8:15 p.m. — Night Angel is the first to perform solo and she admits she’s worked hard to get to this moment. Years ago someone close to her passed away and it ripped her world apart. Ever since that day she’s felt like she’s had a guardian angel and she’s ready to take big risks. We see an image of a soccer ball and a football once again. She dedicates “How to Love” by Lil’ Wayne to his “Masked Singer” alter ego, Robot. She’s showing off her lower register in this number before belting out the chorus to this slow jam. As a final clue, she shows off a moon pin on her costume. The panel thinks Night Angel is Dawn Robinson, Ciara or Kandi Burruss.

8:25 p.m. — It’s time to turn our attention to the Turtle who says he believes himself like he never has before. He’s especially thrilled by Robin’s compliments and admits to being a super fan of the panelist. Clues point to him being in a boy band and tonight Turtle is singing “Jealous” by Nick Jonas. This is a sexy side of the Turtle, filled with falsettos that lead to screams from the panel. For a final clue, Turtle shows off a ring with a massive fake diamond on it. The panel thinks Turtle could be Kevin Richardson, Nick Carter or Justin Guarini.

8:40 p.m. — Rhino is blown away that he’s come this far with such heavy hitters. His career has had many failures and at one point he would wear a mask out of shame. Now he proudly wears his Rhino mask to show off a side of himself he’s always wanted to share. We see the number 9 as well as a trombone, an airplane and a reference to children. Tonight Rhino is singing “Humble and Kind” by Tim McGraw and Nicole starts crying instantly. It’s a beautiful rendition and Rhino has a great country tone. For a final clue, Rhino shows off a baby rhino pin. The panel thinks the Rhino is Barry Zito, Jason Aldean or Blake Shelton.

8:50 p.m. — The Frog is closing out tonight’s episode and stripping away his public persona has shown him sides of himself he didn’t know existed. We see more basketball clips while the Frog says he feels electrified and wants the trophy more than anything he’s wanted in his life. We also see some hair rollers as Frog says he’s coming for that golden mask! Tonight he’s performing “Hip Hop Hooray” by Naughty By Nature. The rapping amphibian is so much fun to watch on stage and always engages the audience while strutting across the stage. For a final clue, Frog shows off a pin that says “Mom.” The panel thinks Frog could be Chance the Rapper, Bow Wow or Lil’ Fizz.

8:59 p.m. — It’s time for the studio audience to vote and send one of these singers packing. Who will be forced to unmask in front of America and leave the competition just one week shy of the finale? Sadly, it’s the Rhino’s time to go. But before we learn his true identity, the panel makes their final guesses — Trace Adkins (Robin), Barry Zito (Ken, Jenny), Jason Aldean (Nicole) and Blake Shelton (Jay). Finally, the Rhino reveals himself and it’s former all-star pitcher, Barry Zito! Stop the presses, Ken was right! That’s a wrap for tonight and Frog, Night Angel and Turtle will compete for the golden mask in next week’s finale.