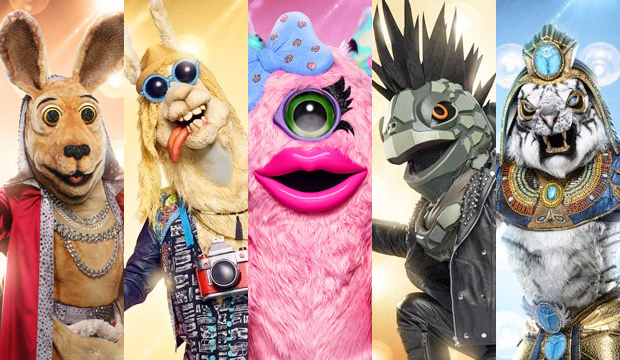 In the second episode of Fox’s “The Masked Singer” Season 3, the reality TV show welcomed Jason Biggs to join the panel alongside Robin Thicke, Jenny McCarthy, Ken Jeong and Nicole Scherzinger. Their collective goal, as always, was to try to identify the mystery celebrities hiding inside the elaborate costumes. After the elimination of the Robot on Super Bowl Sunday, only five celebs remained in Group A: Kangaroo, Llama, Miss Monster, Turtle and White Tiger. Did you correctly guess which member from this group was sent home second, and who was hiding underneath their mask?

Below, check out our minute-by-minute “The Masked Singer” recap of Season 3, Episode 2, titled “The Playoffs: Group A,” to find out what happened Wednesday, February 5 at 8:00 p.m. ET/PT. Then be sure to sound off in the comments section about your favorite costumed celebs on Fox’s reality TV show and who you think is hiding underneath the masks. Keep refreshing/reloading this live blog for the most recent updates.

8:00 p.m. — “Previously on ‘The Masked Singer’!” In Sunday’s season premiere, Group A took the stage and performed as six individuals (so long, smackdowns). After the judges and in-studio audience cast their votes, host Nick Cannon revealed the first eliminee of the year: Lil Wayne as Robot. This was one of the most shocking reveals of all time, as Lil Wayne is a five-time Grammy winner who many would consider too cool to sign up for such a silly show. But he confirmed he did it all for his kids. Awww! So who’s going to be the second celeb eliminated?

8:10 p.m. — First up tonight is that long-necked Llama who is hoping to keep the laughs rolling in. We see Llama playing around with an accordion in his clue package as he says his strategy is to approach the competition the same way as he approached his career. For a while he was spinning his wheels until he began to “think on his feet.” Tonight he’s singing “It’s Not Unusual” by Tom Jones. Llama has the voice of a mature gentleman and can definitely carry a tune. He enjoys prancing around the stage and entertaining the crowd – he’s definitely comfortable in front of an audience. Overall, Llama delivers a solid performance! Llama hints that he was voted most likely to be near the firing canons at the “Masked Singer” Academy. The panel tosses out guesses that the Llama could be Johnny Knoxville, Joel McHale, Zac Galifianakis or Woody Harrelson.

8:20 p.m. — Next up in the spotlight is Miss Monster, who is thrilled people loved her first performance. She’s happy to focus on being an artist and we see her drawing a portrait of Monster, but there’s a butterfly on her drawing pad. We see a Queen chess piece as she says she’s capable of everything but full of love. Tonight she’s singing “Fancy” by Bobbie Gentry. This funky, raspy and soulful voice is none other than Chaka Khan but I’m not sure if the panel knows it yet. She’s toning down the voice, likely in hopes of concealing it, but she needs to be careful it doesn’t get her voted off. Finally she lets off a few fireworks at the end and I’m pretty sure everyone knows she’s a true diva at this point. Miss Monster says she’s most likely to be in the “presence of royalty” and I’m thinking this is an homage to her good friend Prince. The panel still seems off base with guesses such as Mary Wilson, Priscilla Presley and Celine Dion.

8:30 p.m. — Third up is the wild White Tiger who had no idea how much work performing would be. He’s putting in the time to hone his new craft and we see an image of him skiing on the slopes before learning he’s no stranger to celebrating and he loves a good block party. It may sound crazy, but he says dancing heals his body after taking a beating. Tonight White Tiger is singing “Good Vibrations” by Marky Mark and the Funky Bunch. White Tiger is continuing the rap thing, but he’s not very good at it. Despite his lack of musical talent, White Tiger seems to be having more fun than anyone on stage and that energy might save him. My guess is this is none other than football star Rob Gronkowski. White Tiger says he was voted most likely to go to the mat for a friend, and he has. The panel believes his true identity is Charles Haley, Rob Gronkowski or Hulk Hogan.

8:40 p.m. — Kangaroo is up next tonight and she says recently she feels like she’s been watching her life from the sidelines. Although it’s scary herself back in the spotlight, she knows she needs courage to get back in the game. We see her tossing around a basketball with a group of men wearing jerseys…and neckties. She’s determined to be a role model for her child and has no plans on being eliminated anytime soon. Tonight she’s singing “You Know I’m No Good” by Amy Winehouse. Despite all the sports references in her clue package, Kangaroo has to be a professional singer. She’s just too damn talented. Vocally she’s just spot on, but Kangaroo doesn’t move around the stage much so she may lose points on entertainment value. She says she was voted most likely to appear on a list with Seal and Mike Tyson – and she might have been. The panel guesses Kangaroo is Candace Parker, Tatyana Ali or Gabrielle Union.

8:50 p.m. — Last to perform tonight is the spiky Turtle and he thinks this is a great opportunity to break out of his shell. We see him in a cafeteria picking up a lunch tray as he says people have always expected him to act a certain way. The camera zooms in on a soda can as he says he wants to rebel and sing a love song if he wants to. Tonight he’s singing “Say You Won’t Let Go” by James Arthur. He has a nice pop voice and sounds like someone who has definitely been on the radio before. He even shows off some falsetto notes to prove he’s got range and I’d say Turtle might have the performance of the night. After revealing he was voted most likely to hunt for booty, the panel guesses Turtle could be AJ McLean, Billy Joel Armstrong, Darius Rucker or Zac Efron.

8:59 p.m. — The votes have been tallied and the singer with the least amount of votes will be unmasked. The remaining four will compete next week in the Group A championship. The entertainer being eliminated tonight is Llama. The panelists each gave one final guess as to the identity of this four-legged performer: Woody Harrelson (Nicole), Adam Carolla (Robin), Joel McHale (Ken), Kelsey Grammar (Jenny) and Johnny Knoxville (Jason). At last, Llama reveals himself to be Drew Carey! Once again the panel is skunked and that’s a wrap for tonight.