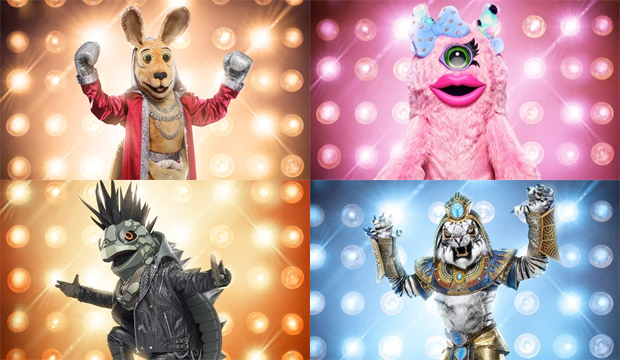 In the third episode of Fox’s “The Masked Singer” Season 3, the reality TV show welcomed Leah Remini to the panel alongside normal judges Robin Thicke, Jenny McCarthy, Ken Jeong and Nicole Scherzinger. Were the panelists able to uncover the secret identity of this week’s eliminated singer, or did their terrible track record continue? Only four celebs remained in Group A at the start of the episode: Kangaroo, Miss Monster, Turtle and White Tiger. Did YOU correctly guess which member from this group was sent home third, and who was hiding underneath their mask?

Below, check out our minute-by-minute “The Masked Singer” recap of Season 3, Episode 3, titled “Masking for a Friend: Group A,” to find out what happened Wednesday, February 12 at 8:00 p.m. ET/PT. Then be sure to sound off in the comments section about your favorite costumed celebs on Fox’s reality TV show and who you think is hiding underneath all of the masks.

8:00 p.m. — “Previously on ‘The Masked Singer’!” In Wednesday’s second episode, Group A lost another member, Drew Carey as Llama, after previously saying goodbye to Lil Wayne as Robot in the premiere. “I like having a goof and a lot of laughs,” Carey told Nick Cannon in his end-of-show interview. Will Kangaroo, Miss Monster, Turtle or White Tiger follow Llama and Robot out the door? We’ll find out tonight!

8:05 p.m. — First on the docket tonight is a group performance of the Kiss classic “Rock and Roll All Nite.” Miss Monster kicks off the performance followed by Kangaroo, Turtle and White Tiger. Turtle seems the most comfortable with the vocals which isn’t surprising considering he considers himself more of a rocker, but Miss Monster held her own.

8:15 p.m. — Turtle is up first for his solo performance and we’re getting some inside clues from his “teacher.” She says he was the most driven student she’s ever had and we briefly see a map of South Korea. We also see what looks like fraternity symbols on the chalkboard as the teacher recalls him as a sweet, humble person. For his song, Turtle is singing “There’s Nothing Holdin’ Me Back” by Shawn Mendes. This high energy anthem is in the perfect key for Turtle to show off his vocal range and he even throws in a few dance moves! Turtle came completely out of his shell for this performance, which is probably his best to date. In his post-performance interview, Turtle mentions that he’ll never forget the morning he and Nicole shared together. Apparently they know each other! Panel guesses include Nick Lachey, Jaden Smith and Hunter Hayes.

8:25 p.m. — Up now is Miss Monster and we’re hearing some clues straight from her hairstylist. He calls her his spiritual mom and recalls how he was intimidated to meet her at first. We see imagery of a clothesline with white socks, a slice of pizza and a teddy bear hanging from it. We also see camouflage and it sounds like Miss Monster is known for her hair. Everything in this clue package only confirms my suspicion all along that this is Chaka Khan. For tonight’s performance Miss Monster is singing “You Don’t Own Me” by Lesley Gore. I hate the arrangement of this version, but I love those low, jazzy notes she’s hitting. She seems to be purposely avoiding the bombastic notes she’s capable of. As for performing, she’s not moving around much so we’ll see if the audience responds. Following her performance, Miss Monster reveals she once had a rendezvous in “Sin City” with Robin. The panel believes Miss Monsters could be Mary Wilson, Queen Latifah or Gloria Gaynor.

8:40 p.m. — Kangaroo is up next and we’re going to learn more about her from younger brother. He’s only one year younger than her and says she was a bit of a drama queen in her teenage years, but she’s one of the most resilient people he knows. We see a model airplane as her brother says Kangaroo was the glue that held his family together when tragedy struck. We also see doll made of yarn that looks like an angel. Tonight Kangaroo is singing “Diamonds” by Rihanna. Her voice is clear and she’s got a beautiful tone that I just can’t put my finger on. She didn’t really take the chorus anywhere so the performance was a bit one-note but the audience seems to like it. We learn that Kangaroo once sat at the same table with Leah and she was inspired by Leah’s story. The panelists guess Kangaroo is Rosie Huntington-Whiteley, Lindsay Lohan or Jordin Sparks.

8:50 p.m. — Last up tonight is the White Tiger. He knew he wasn’t going to be the best singer, but he’s always known how to work a crowd. His college roommate reveals that White Tiger once woo’d some ladies by telling them he was a stripper and did a routine on the spot. We also see pads of butter, an old-school telephone and some #1 foam fingers. For his performance, White Tiger is singing “We Will Rock You” by Queen. The problem here is that he can’t actually sing so he’s just chanting and yelling. He might be entertaining, but White Tiger is not only a bad singer, but a bad rapper as well. Regardless, the crowd loves this guy. The panelists believe he is Rob Gronkowski, Fabio or Joe Manganiello.

8:59 p.m. — The votes have been cast and it’s time to reveal which singer will be unmasked. The performer leaving the competition and revealing their true identity is Miss Monster. Before she unmasks the panel reveals their final guesses: Chaka Khan (Nicole), Reba McEntire (Ken), Queen Latifah (Jenny), Mary Wilson (Leah) and Chaka Khan (Robin). Finally, Miss Monster pulls off that mask to reveal she is indeed the legendary Chaka Khan! That’s a wrap for tonight.