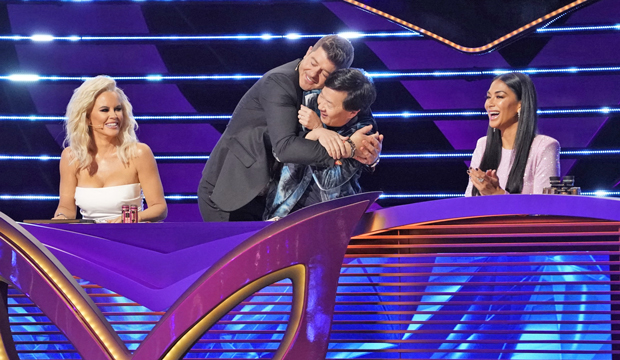 “The Masked Singer” viewers met a whole new gaggle of costumed celebrities this week in the form of Group B: The Banana, The Elephant, The Frog, The Kitty, The Mouse and The Taco. Judges Robin Thicke, Jenny McCarthy, Ken Jeong and Nicole Scherzinger did their best to guess the sextet’s secret identities, but did their awful track record continue this week? And did YOU correctly predict which member from this group received the lowest number of votes and was forced to unmask in front of America?

Below, read our minute-by-minute “The Masked Singer” recap of Season 3, Episode 4, titled “A Brand New Six Pack: Group B Kickoff,” to find out what happened Wednesday, February 19 at 8:00 p.m. ET/PT. Then be sure to sound off in the comments section about your favorite costumed celebs on Fox’s reality TV show and who you think is hiding underneath all of the remaining masks.

8:00 p.m. — “Previously on ‘The Masked Singer’!” In Wednesday’s third episode, Group A lost a third member, Chaka Khan as Miss Monster, after previously saying goodbye to Lil Wayne as Robot and Drew Carey as Llama. “We were in the same show together!” Chaka told Robin after being unmasked by Nick Cannon. That meant the surviving Group A members (Kangaroo, Turtle and White Tiger) have advanced to the Super 9 and will be seen at a later date. So who’ll be eliminated tonight? Let’s find out!

8:10 p.m. — Kicking off  Group B is a sly-looking Frog rocking a purple suit. The judges comment that he’s quite small, like, “Kevin Hart small.” In his clue package he states his metamorphoses has been anything but typical; he has taken off like a lightning bolt and is ready to do things his own way. We see a bag of leftovers before he mentions he was “slithering with the big frogs” and the camera pans to a poster for the 1996 Olympic games. Last we see $106 before Frog breaks into “U Can’t Touch This” by MC Hammer on stage. Frog ain’t no White Tiger, he has a actual rap skills and he’s running the stage like a pro. Next he breaks into a serious dance sequence that includes a classic running man. I love this guy! The panel tosses out guesses like Michael Johnson, Carl Lewis and Ray J.

8:15 p.m. — Up next is a robotic looking Elephant who looks quite tall and intimidating. In his clue package he’s sitting at a drum set when he says he was just a calf when he realized his calling. He turned his passion into a one-man show and went from canvassing park benches to leading a movement and even paraded through white houses. Just the tone of voice and the way he speaks gives me Jesse Ventura vibes. Elephant is singing “Friday I’m In Love” by The Cure and now I can definitely tell you it is NOT Jesse Ventura. This singing voice is completely different than the masked speaking tone and he’s got a higher, pretty voice. This is not what I was expecting. I’m not convinced Elephant is a professional singer, but he can carry a tune. The panel thinks it could be Lance Armstrong, Travis Barker, Tommy Lee or Beto O’Rourke.

8:20 p.m. — Up next is a divalicious, itty bitty Kitty! In all her wildest dreams she never thought she’d be here, but it’s almost like the show is made for her. She says it’s a little bit of heaven where she can wipe the slate clean. Sometimes Kitty feels lonely because people don’t think of her as the person she has become, but the person she once was. Throughout the clues package we see clips that remind me of old Hollywood and finally we see rose petals flying. For her performance, Kitty is singing “Dangerous Woman” by Ariana Grande. This tiny package has some pipes on her and this isn’t an easy song to sing. What a showgirl! Kitty reveals she’s doing something nobody has seen from her before so perhaps she’s not a professional singer? The panel guesses Julianne Hough, Paris Hilton or Nicole Richie.

8:30 p.m. — It’s time to learn about Taco now and we can already see he’s got a sense of humor. Taco says says he’s been a comforting part of our lives for decades and we see some old VHS tapes. He has plenty of seasoning and he’s in a good place, but his routine can get a bit mild so he’s here to spice things up. We see a San Francisco trolley which could be a clue to where he’s from. Taco breaks out in song with “Fly Me To the Moon” by Frank Sinatra and the man can sing! He’s got a legendary feel about him and my guess is he’s an all-around showman who can do it all. Following his performance Taco jumps for joy so I don’t think he’s too old, he’s got some energy. The panel thinks Taco could be Regis Philbin, Martin Short or Bob Saget.

8:40 p.m. — We continue with the petite, elegant Mouse who says not to let her size fool you. Her presence is larger than life and she’s always been a leader in her field. We see her on a football field where she says she wrote the playbook. She likes showing everyone who is the boss and we see football players wearing jerseys with 1979 on them. She never accepts anything less than gold and she’s singing “Get Here” by Oleta Adams. When she begins singing I can instantly recognize one of my favorite singers, miss Dionne Warwick. Obviously the gold was a reference to “Solid Gold,” which she hosted back in the 1980’s. This isn’t up for dispute, I know this voice! But does the panel? They guess Darlene Love, Dionne Warwick and Mya Rudolph.

8:50 p.m. — Last up is Banana who struts out with a lot of confidence before we see his clue package. We see a cowboy hat, a blow fish and we see him on a possible tour bus. He loves to party and he says he’s tough on the outside, but he’s a smoothie on the inside. We see a blue collar before he says he just wants to see people smile. Banana is singing “A Little Less Conversation” by Elvis Presley. Banana has a smooth voice and he’s a pretty solid showman. This is a fun, energetic performance! The panel throws out guesses such as Bill Engvall, Ed Helms and Darius Rucker.

8:59 p.m. — The votes have been cast and the results are in. The first singer to go home in Group B is Elephant. So who is this character? The panel makes their final guesses: Lance Armstrong (Jenny), Beto O’Rourke (Ken), DJ Steve Aoki (Nicole) and Travis Pastrana (Robin). But when Elephant unmasks we realize it’s actually skateboard legend Tony Hawk! And that’s a wrap for tonight.