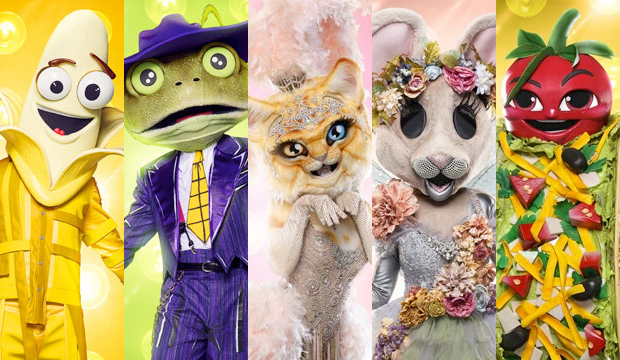 “The Masked Singer” judges — Robin Thicke, Jenny McCarthy, Ken Jeong and Nicole Scherzinger — had a lot to prove in the Group B playoffs after failing to guess the identity of the Elephant (it was skateboarding legend Tony Hawk) last week. On Wednesday night, the five surviving members of Group B performed their hearts out on the stage, but was Banana, Frog, Kitty, Mouse or Taco eliminated? And did any of the regular panelists or guest judge Gabriel Iglesias correctly guess their true identity?

Below, read our minute-by-minute “The Masked Singer” recap of Season 3, Episode 5, titled “Mask-Matics: Group B Playoffs,” to find out what happened Wednesday, February 26 at 8:00 p.m. ET/PT. Then be sure to sound off in the comments section about your favorite costumed celebs on Fox’s reality TV show and who you think is hiding underneath all of the remaining masks.

8:00 p.m. — “Previously on ‘The Masked Singer’!” In last week’s fourth episode the audience was introduced to Group B, with its first member soon being unmasked: Tony Hawk as Elephant. “I had one more song in me, but I didn’t want to go much further,” Tony told host Nick Cannon in his exit interview. Another Group B singer will go home tonight, but will it be Banana, Frog, Kitty, Mouse or Taco?

8:10 p.m. — Up first tonight is the Banana who says he doesn’t want to slip up this week as we see a clock that reads 2:13. We also see a pair of cowboy boots while he says he’s determined to rock out as his authentic self. There is mention that it’s time for him to star in his own show, so perhaps he’s always been in a supportive role? Anyways, tonight Banana is singing “Achy Breaky Heart” by Billy Ray Cyrus and he’s doing an alright job but certainly doesn’t sound like a professional singer. Banana tries to get the audience involved, but this just isn’t as entertaining as it could be. I’d say Banana is in jeopardy of being unmasked tonight. He reveals his favorite class in high school was art and he gets emotional when saying art got him through some of the toughest times in his life. The panel is perplexed, but thinks it could be Larry the Cable Guy, Ed Helms, Erik Estrada or Billy Bob Thornton.

8:20 p.m. — Next up the beautifully rhythmic rodent, the Mouse. The stage is like her second home and she’s more determined to stay in the game. We see a rhino statue and a framed picture of praying hands. She’s been around for quite some time, but she still feels like she has stories to tell. In her spare time she likes reading a good romance novel, needlepoint and some wine. Tonight Mouse is singing “This Will Be (An Everlasting Love)” by Natalie Cole. This voice is clearly Dionne Warwick and this song should come as no surprise as Dionne wants embarked on a European tour with Natalie and Dionne’s cousin, Whitney Houston. Mouse is struggling a bit with her range tonight and it’s not quite living up to her first performance, but the judges still know she’s a living legend. Mouse says her favorite subject in school was math because her daddy taught her those numbers represent her money. The panel thinks it could be Tracee Ellis Ross, Tina Turner or Dionne Warwick.

8:30 p.m. — The suave Frog is up next and this amphibian is pimpin’! We see Frog sit down at a typewriter with the letters C, S and I highlighted so he may be an actor. We also see a star from the Hollywood Walk of Fame, some GI Joe toy soldiers and a basketball. These clues are all over the place! There are two references to Prince, which makes the panel wonder if he’s connected to the legend. Frog is singing “In Da Club” by 50 Cent, but he’s putting a jazzy spin to it. I love this arrangement! Frog is a fantastic stage performer and for a contestant that doesn’t sing, he’s surprisingly becoming my favorite character this season. Frog says his favorite subject in school was gym — it kept him in shape so he could bust his dance moves and make the ladies go crazy. The panel thinks Frog could be Alfonso Ribeiro, Kevin Hart or Omarion.

8:40 p.m. — Party favorite Taco is up next and we see a whoopee cushion among things in his salsa buffet while he says people may think of him as a buttoned-up mild type, but he actually used to be a bit of a hot head. He met the love of his life and changed his ways, but we see Gemini highlighted on an astrological chart and notice what looks like a wig or toupee served up on a platter. Tonight Taco is singing “Bossa Nova Baby” by Elvis Presley. He’s got a fantastic voice and definitely sounds like an older gentleman. I love his showmanship and song choices. Taco has the crowd completely on his side and there is no way he’s heading home tonight. He reveals he was a class clown in school and was once put in a closet for bad behavior, but he loved it because he didn’t have to sit in class. The panel thinks Taco could be Harry Connick Jr., Seth MacFarlane, Ted Danson or Alec Baldwin.

8:50 p.m. — The final performer tonight is the mystifying, sassy Kitty. She’s been overwhelmed by this amazing experience and she says she’s taking a second to regroup as we see her sitting down at a sewing machine. She loves to create a pillow for someone special or a modern dress for a family member’s ball. We see a reference to Little Red Riding Hood and I still find it interesting that Kitty has two different colored eyes. Tonight she’s singing “Mercy” by Brett Young. Kitty sounds like a current pop star and is showing off the vocals with this ballad. She sounds great! I’m completely stumped by this one. Kitty reveals her favorite subject in school was English because she is a book worm and she used to write her own science fiction books and sell them for quarters. The panel throws out guesses like Millie Bobby Brown, Amanda Seyfried, or Sarah Hyland.