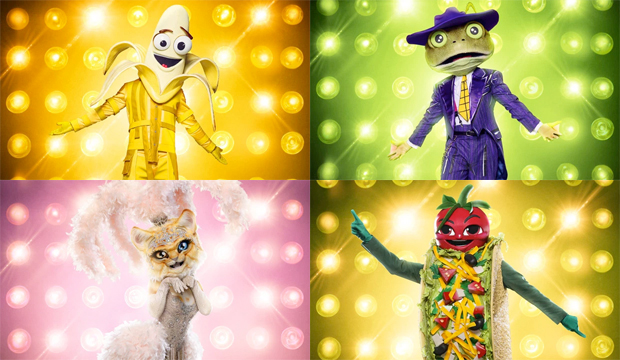 Wednesday night on “The Masked Singer,” the four finalists from Group B — Banana, Frog, Kitty and Taco — faced off in the championships for a chance of returning later on in the Super 9. The panel of judges were coming off a great showing last week when they correctly guessed the Mouse’s true identity was Dionne Warwick — well, everybody but Ken Jeong. Did the lucky streak continue for Robin Thicke, Nicole Scherzinger and Jenny McCarthy, or were they all stumped again? Season 1 winner T-Pain (Monster) rejoined the panel this week for more fun and games.

Below, read our minute-by-minute “The Masked Singer” recap of Season 3, Episode 6, titled “Friends in High Places: Group B Championships,” to find out what happened Wednesday, March 4 at 8:00 p.m. ET/PT. Then be sure to sound off in the comments section about your favorite costumed celebs on Fox’s reality TV show, the judges’ dumbest guesses, and who you think is hiding underneath all of the remaining masks.

8:00 p.m. — “Previously on ‘The Masked Singer’!” In last week’s fifth episode the audience voted out another member from Group B: legendary singer Dionne Warwick. “I had the best time. It was a ball!” she told host Nick Cannon during her exit interview. A third Group B singer will go home tonight, but will it be Banana, Frog, Kitty or Taco? Let the guessing game begin!

8:15 p.m. — The four Group B finalists kicked things off with a group performance of “Larger Than Life” by the Backstreet Boys before Kitty took center stage on her own. In Kitty’s clue package she says he BFF is there to dish out some kitty “gossip.” Kitty’s friend has long green hair and says they’ve known each other since they were little kittens. She didn’t have a ton of friends and got bullied at school for being weird. As a young kitten, Kitty enjoyed writing poems or directing horror films for her friends to star in. Kitty has the voice of an angel, but it’s her dark side that will help her slay the competition. Tonight Kitty is singing “Mama’s Broken Heart” by Miranda Lambert. Kitty is throwing a sexy hoedown on stage with a team of cowboys dancing behind her. It was a nice performance, but her voice didn’t stand out as if she is a professional singer. As a clue, Kitty gives away friendship bracelet to Robin that says “fireworks” because they first time they met was “lit.” The panel guesses Kitty is Christina Ricci, Kristen Bell or Haylie Duff.

8:25 p.m. — It’s Taco’s turn to impress the panel, so what does his friend have to reveal about him? We see a menu in his clue package with the letters “ME” capitalized, prompting Nicole to ask, “Does he have an Emmy?” He says Taco helps people when they’re knocked down and the friend is hiding behind a seafood platter. We also see some baked beans and learn that Taco has children. I’m stumped! Tonight Taco is singing “Can’t Help Myself” by The Four Tops. He’s got a couple of chefs doing some background dancing as he serenades the crowd. Taco has a nice, old-school vibe about him and sounds like a true Vegas entertainer. As a clue, Taco gives away a friendship bracelet to Nicole that says “kiss” because when he first saw her in person she was “perfect.” The panel thinks Taco could be Barry Manilow, Howie Mandel or Jerry Springer.

8:40 p.m. — Banana is hitting the stage next, but first we’re going to hear some clues about his identity. Some female family members say he’s a great role model and taught them how to drive in go-carts. He’s been through a lot of heartbreak, but he’s always been a positive influence. Tonight he’s singing “Lean On Me” by Bill Withers. Banana has a husky, soulful voice and this is a much better vocal than we’ve heard from him before. He sounds like an older gentleman but he’s got plenty of energy on stage and he’s got the panelists on their feet clapping along to the performance. Banana took us to church! As a clue, Banana gives away a friendship bracelet to Jenny that says “Nineties Love” and says they had time to hang as friends and he had a great time. The panel then guesses that Banana is Michael Andretti, Brad Paisley, Larry the Cable Guy or Johnny Knoxville.

8:50 p.m. — Last up in this Group B showdown is Frog. His friend dishing clues is an invisible woman wearing a fur coat who says she’s known him since he was a tadpole. She knew immediately he would be a superstar. We find out he was in LA when this mystery woman took him to his first late night talk show. It was way past his bedtime, but she let it slide. Child star? We also see some bath products including shampoo, which certainly a frog doesn’t need. We also see a little green bow tie on the floor as she says life hasn’t always been easy for Frog, but he persevered. Tonight Frog is singing “You Dropped a Bomb on Me” by The Gap Band. He’s actually singing tonight rather than his usual rap and he’s doing quite well. Frog is so much fun to watch and I love his song choices, he’s probably my favorite this season and I have no clue who he is. As a clue, Frog gives a friendship bracelet to T-Pain that says “All We Do is Win.” The panel guesses Ludacris, Tommy Davidson or Omarion.

8:59 p.m. — The votes have been counted and it’s time to find out which singer will be unmasked. The masked singer with the least amount of votes is Taco! That means Banana, Frog and Kitty have advanced to the Super 9. Before Taco is revealed the panel has to submit their final guesses: Barry Manilow (Nicole), Martin Short (Ken), Martin Short (Robin), Kelsey Grammar (T-Pain) and Jerry Springer (Jenny). But are any of them right? Taco pulls off that mask to reveal he is actually Tom Bergeron! Wow! They didn’t see that coming. That’s a wrap for tonight.