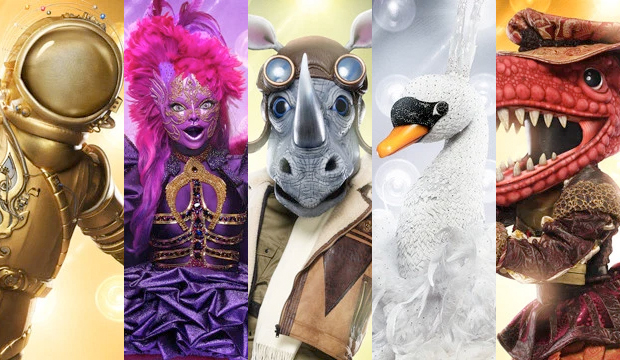 At the start of Wednesday’s eighth episode of “The Masked Singer,” five costumed celebrities from Group C still remained in the competition: Astronaut, Night Angel, Rhino, Swan and T-Rex. Each singer gave it their all on the stage, but at the end of the hour one unfortunate contestant received the lowest number of votes from the audience and had to unmask in front of America. Did panelists Robin Thicke, Nicole Scherzinger, Jenny McCarthy, Ken Jeong or guest judge Joel McHale correctly guess this week’s secret identity? What about YOU at home?

Below, read our minute-by-minute “The Masked Singer” recap of Season 3, Episode 8, titled “It Never Hurts to Mask: Group C Playoffs,” to find out what happened Wednesday, March 18 at 8:00 p.m. ET/PT. Then be sure to sound off in the comments section about your favorite costumed celebs on Fox’s reality TV show, the judges’ dumbest guesses, and who you think is hiding underneath all of the remaining masks.

8:00 p.m. — “Previously on ‘The Masked Singer’!” In last week’s seventh episode the audience voted out the first member from Group C: former Vice Presidential nominee Sarah Palin (Bear). “This is something our country needs right now,” she told host Nick Cannon during her exit interview. Her shocking elimination meant that only five Group C contestants still remained in the hunt for the Golden Mask. Who will be booted tonight? Let the guessing game begin!

8:10 p.m. — Astronaut has a whole new mission now that he’s connecting with the audience on stage. He’s loving this fresh start as the circle of life keeps spinning and it feels like he’s getting a foothold on this new world. When he was young he was a bright star, but then he overreached and got burned. He found himself isolated and lonely. Now he’s ready to sing a song from a dear friend to prove he belongs (and he mentions this while holding a bouquet of balloons). He’s singing “Signed, Sealed and Delivered” by Stevie Wonder. He sounds young, but it’s interesting he calls Stevie a “dear friend.” Jenny comments that his voice sounds totally different this week and I agree. He’s got a more soulful sound. This is a nice opening performance from Astronaut! Nicole says, out of Group C, Astronaut is by far her favorite. Astronaut’s yearbook quote is, “We can all reach the stars. Sometimes it just takes some help from an organized crime family.” This inspires clues from the panel including Donald Glover, Corey Feldman and Joseph Gordan-Levitt.

8:20 p.m. — The Night Angel has a revitalized confidence and she’s reminded of the joy she has for music. Years ago she was sitting up in her room surrounded by other angels, but lost in the crowd. She had a thirst for more. So “bang bang,” Night Angel left her safe place and  chose to come back to Earth. In the background of this clue package we see a drawing of a palace and a strawberry. Being on her own was scary because she felt rejection for the first time. Night Angel taught herself to survive (we see an image of sweet tea) and she hustled. With hard work she’s built an empire and she can give you a “million reasons” why she belongs here. Tonight Night Angel is singing “Million Reasons” by Lady Gaga and she’s got a nice, lower tone. I’m not sure she’s a professional singer or an entertainer of some other medium but she’s got some serious power and vibrato! She delivered a fantastic vocal. Her yearbook quote is, “If you’re willing to lend a helping wing, then you too can break berries.” Did she really say berries? Maybe I misheard that. Guesses to Night Angel’s identity include Regina King, Sia, Jessica Simpson and Taraji P. Henson.

8:30 p.m. — The T-Rex was hanging out with all her friends on T-Rex Island when BOOM! The island was hit by a meteor. She was devastated to find only singles and doubles of them were left. She didn’t want her career to go downhill fast and her heart was beating like a bumble bee. Her dreams of being a megastar are in her little arms’ reach and she double dares anyone to try and stop her. Tonight she’s singing “Push It” by Salt-In-Pepa. T-Rex clearly isn’t a musician but she’s a good dancer and she has more energy than any contestant I’ve ever seen. She’s wild! Her yearbook quote is, “If you dream big, your face can be everywhere! And you’ll never go extinct, unless a meteor hits.” This prompts the panel to guess T-Rex is Lilly Singh, Liza Koshy or Mikaela Shiffrin. I, for one, have no idea who ANY of those people are OR T-Rex!

8:40 p.m. — The Swan was petrified before her last performance and now it’s like she’s fallen down a rabbit hole into a amazing wonderland. She knows her life seems all new moons and rainbows, but she came from nothing. Only through illusions did she transport her family to a better place. From a frozen white snow world she moved west to the sunshine. There are a lot of rainbows in her clue package. Tonight she’s singing “I Hate Myself For Loving You” by Joan Jett & the Blackhearts. Swan is not a good singer, but she’s trying. This is a like bad karaoke, but she weirdly starts screaming “I love you Ken Jeong!” as his face appears on the screen. Swan’s yearbook quote is, “I’ve been the black swan and against all odds I’ve been able to spread my wings for millions to see. Life is truly magical.” This sparked the panel to guess Swan could be Mila Kunis, Kristen Stewart, Kristen Bell or Sandra Bullock.

8:50 p.m. — The last singer to take the stage is the Rhino. We see him standing on the wings of an airplane as he says after last week’s performance he is flying high. He’s always been a risk taker which has led to many ups and downs. We see a sign of the “South” as he mentions for a time it felt like he was free-falling through life. Just when it felt he might hit the bottom he met his wife and she inspired him to pursue other passions. We see a man cutting a sandwich with a big diamond on his finger. We also see him playing tennis on the wings of the plane. Tonight he’s singing “Nice to Meet Ya” by Niall Horan. Rhino has a great voice and definitely sounds like a professional singer. He’s got a slight a country twang but definitely knows how to bust a move on stage. This guy’s a pro! His yearbook quote is, “Family is very important for success. Especially when performing for a king is in your blood.” This prompts the panel to guess Rhino is Tim Tebow, Chris Pratt or Ryan Lochte.

8:59 p.m. — The singer with the least amount of votes and being unmasked tonight is the Swan! But before she reveals her true identity, the panelists must submit their final guesses: Nina Dobrev (Robin), Olivia Munn (Ken), Megan Fox (Nicole), Mila Kunis (Joel) and Kristen Stewart (Jenny). Are any of them correct? The Swan pulls off her mask to reveal she is Bella Thorne! Once again the panelists are skunked including Bella’s former costar Ken. Ouch! That’s a wrap for tonight!