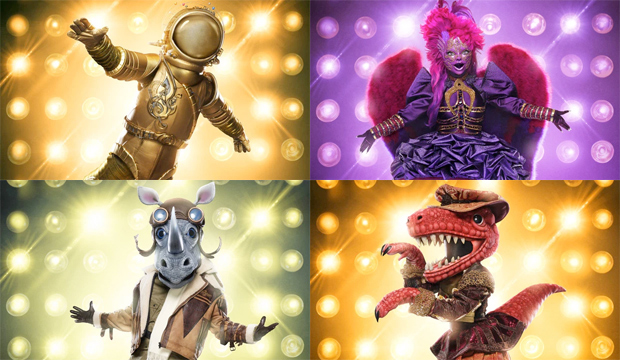 At the beginning of Wednesday’s ninth episode of “The Masked Singer,” four costumed celebrities from Group C still remained in the competition: Astronaut, Night Angel, Rhino and T-Rex. Each singer gave it their all on the stage, but at the end of the hour one contestant received the lowest number of votes and had to unmask in front of America. Did panelists Robin Thicke, Nicole Scherzinger, Jenny McCarthy, Ken Jeong or guest judge Will Arnett (“LEGO Masters”) correctly guess this week’s secret identity? What about YOU at home?

Below, read our minute-by-minute “The Masked Singer” recap of Season 3, Episode 9, titled “Old Friends, New Clues: Group C Championships,” to find out what happened Wednesday, March 25 at 8:00 p.m. ET/PT. Then be sure to sound off in the comments section about your favorite costumed celebs on Fox’s reality TV show, the judges’ dumbest guesses, and who you think is hiding underneath all of the remaining masks.

8:00 p.m. — “Previously on ‘The Masked Singer’!” In last week’s eighth episode the audience voted out the second member from Group C: Bella Thorne (Swan). “This was really out of my comfort zone,” she told host Nick Cannon during her exit interview. The previous week, fans said goodbye to Sarah Palin (Bear). Their untimely eliminations meant that only four Group C contestants still remained in the hunt for the Golden Mask. Tonight’s three surviving singers will advance to next week’s Super 9, joining Kangaroo, Turtle, White Tiger, Banana, Frog and Kitty. Let the guessing game begin!

8:05 p.m. — Astronaut, Rhino, T-Rex and Night Angel begin with an energetic group performance of “Let’s Get Loud.” I have to say Night Angel sounds the best on this Jennifer Lopez hit, but T-Rex’s energy is infectious. Rhino and Astronaut sort of faded to the background while the women stood out.

8:15 p.m. — Becoming the Night Angel has been therapeutic for tonight’s first competitor. She’s been doing this since she was a teen, but she’s never felt so free. A friend from high school says she always had to juggle school with chasing her dream, so she missed out on a lot. He says this from behind a disco ball, so perhaps she was in school in the 1970’s? We also see an Astronomy class report card and we learn she didn’t attend her graduation. Tonight Night Angel is singing “Shout!” by the Isley Brothers. She’s consistently proven she’s one of the best singers this season and I love the sass she’s showing tonight. And those operatic notes near the end? Where did that come from? Night Angel gets emotional and says she still struggles with confidence when she sings. She also reveals a clue referencing “Good Times” and says Jenny mentions her name often on her radio show. The panel guesses she could be Toni Braxton, Taraji P. Henson, Mayim Bialik or Janet Jackson.

8:30 p.m. — When Astronaut started this journey he never knew how “at home” he would feel in this space suit. He references being “only human,” which Nicole quickly mentions is a Jonas Brothers song. His “co pilot” says Astronaut knows how to lead a crew and we see an image of a coffee mug and a pair of dice — each rolled to a 5. Sometimes Astronaut can be a total space cadet and one time he fell on his face in front of thousands of people. Some people may have said “Bye Bye Bye” and called it quits, but Astro got right back up. We also see an image of a “bridge.” Hmmm. Tonight Astronaut is singing “Shape of You” by Ed Sheeran and although he can carry a tune, I’m not sure he is a professional singer. Maybe someone from a boy band that wasn’t the lead? His voice is shaky, almost nervous. Astro says if he makes the Super 9 he’ll make sure the world sees his whole heart. For his clue, there is a reference to a mall and Astro says he and Nicole were together once to celebrate a huge birthday. The panel guesses he is Eddie Vedder, JC Chasez or Joseph Gordon-Levitt.

8:40 p.m. — T-Rex has been working her tail off in this competition and would love to make the Super 9. A friend of hers (flying in a private jet) says they’ve worked together and traveled side by side quite often. There’s a lot of airplane food covering his face. She subscribes to the idea that there is no off day. The friend calls her meticulous and mentions she’s young. We also see lips in a glass and boomerangs lying about. Tonight she’s singing “Jai Ho! (You Are My Destiny)” by A.R. Rahman and The Pussycat Dolls. Like usual, T-Rex’s energy is more impressive than her voice and she really works the stage. The crowd looks energized! For her clue, a poodle is mentioned and T-Rex says she has a connection with Will — through “Lego Batman.” The panel guesses she could be Gabby Douglas, JoJo Siwa or Honey Boo Boo.

8:50 p.m. — Despite rising to the top of his field, Rhino has struggled with constant criticism. Being on “The Masked Singer” and receiving so much praise is beyond humbling. His college roommate reveals they tried surfing and were terrible, but Rhino stuck with it until he mastered the hobby. We also see three quarters next to an arrow pointing upward. When Rhino wants to accomplish something he’ll outwork anyone — and we see the state of Missouri highlighted on a map. Tonight Rhino is singing “Tracks of My Tears” by Smokey Robinson. He’s got a great voice with a slight country twang. This is probably the best vocal performance of the night and I’m impressed! Rhino’s clue references the number “1,000” and Rhino says he and Robin are on the same track, literally. The panel guesses he could be Will Ferrell or David Hasselhoff.

8:59 p.m. — The votes have been cast and only three of tonight’s singers can advance to the Super 9. The contestant with the least amount of votes and forced to unmask tonight is T-Rex. She’s devastated! But before we discover her true identity, the panel must make their final guesses: JoJo Siwa (Jenny, Nicole and Robin), Liza Koshy (Ken) and Tara Lipinski (Will.) Finally, T-Rex unmasks and reveals she is JoJo Siwa! The panel got one right! That’s a wrap for tonight!